A former British soldier has disappeared after being captured by pro-Russian forces while fighting in Ukraine.

Combat medic John Harding, 59, thought to be an ex-paratrooper and Falklands veteran, was observed being evacuated with his comrades after their surrender last month in Mariupol. But he has not been seen since.

Two other Britons who were fighting alongside him, Aiden Aslin, 28, and Shaun Pinner, 48, and were also captured, have since been condemned to death by Vladimir Putin’s stooges in the self-declared Donetsk People’s Republic.

Another captured Briton, father-of-four Andrew Hill, 35, has been told to expect the death sentence.

Harding joined the Ukrainian military five years ago after fighting against Islamic State in Syria. 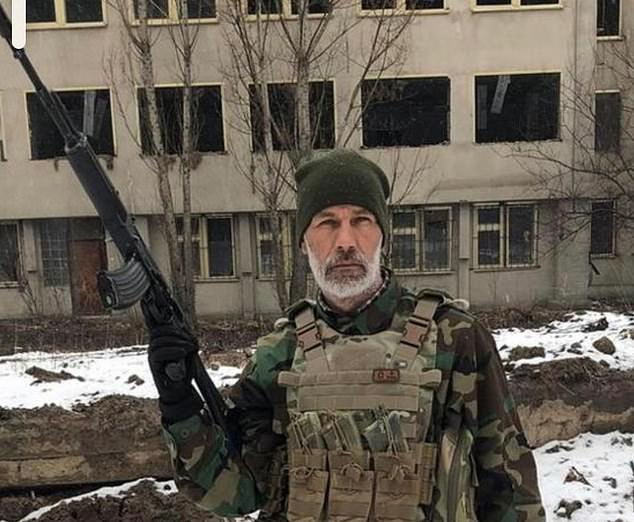 Combat medic John Harding, 59, is thought to have fought in the Falklands War as a youngster

A popular figure from the North East of England, nicknamed ‘Pops’ by comrades, he was seen in TV footage of hundreds of Ukrainian fighters surrendering at Azovstal industrial plant in Mariupol after 82 days of Russian bombardment.

Now friends and former comrades fear that he may have been killed by the separatists, since he has not been seen again, while other British and American captives have been paraded before Russian TV cameras for propaganda.

Alex Grant, an American volunteer with Ukrainian forces, confirmed that Harding had been seen in news agency pictures and there was growing concern about his fate. ‘You can only draw two conclusions: either he’s been whisked away to a secret concentration camp or they murdered him shortly after the surrender,’ he said.

Grant, who has known Harding since 2018, described his comrade as ‘an adventurer and a good medic’, adding: ‘He always wanted to help and serve the people of Ukraine. He held out for as long as he could in Mariupol and that’s why he’s a hero.’

In March and April, Harding wrote on social media about life under Russian attack in Azovstal. ‘I don’t know how close they are but they don’t seem to be short of ammunition,’ he said in one post.

After another intense bombardment, lasting 12 hours, he wrote: ‘I wonder how much of the above ground structure is still intact. I haven’t been to ground level for three or maybe four days. I imagine it’s pretty messy up there.’

Harding sent messages about trying to escape on May 19 as hundreds of Ukrainian soldiers were being evacuated by Moscow’s forces. It is understood they have been taken to an overcrowded prison notorious for brutality.

Harding served with the British Army for nine years after signing up aged 16. While fighting in Syria, he told his comrades that he had been a paratrooper who took part in the famous ‘yomp’ across the Falklands during the 1982 war.

The Army veteran, who has a tattoo saying ‘Happy Days’ on his arm, admitted that he had gone back into uniform since he missed the camaraderie of military service and combat duty – although he told one journalist that ‘being in battle’s a scary thing’.

He joined Kurdish forces fighting Islamic State in 2015 after seeing horrifying video footage of a Jordanian pilot burned alive, and became commander of a tactical medical unit, saying he ‘fell in love with the Kurdish struggle and the Kurds’.

A newspaper report the following year described how he volunteered to carry a mine, tucking it under his chin to ensure he would not survive in a badly maimed condition if it exploded.

The paper also described Harding’s desperate but failed efforts to save a six-year-old boy who had been shot in the chest. ‘I purposely avoid thinking about him because it is painful, but I see his likeness in every six- or seven-year-old child I see,’ said the medic.

An electrical engineer in civilian life, Harding joined Ukraine’s struggle against Russian-backed separatists in the eastern region of Donbas in 2017, along with his friends Aslin, a former care worker from Newark, and Pinner, who has a Ukrainian wife and also served in the British Army.

Last night, a spokesman for Ukraine’s Azov Regiment – the volunteer militia formed to fight the Russians after their 2014 invasion that later became part of Kyiv’s National Guard – confirmed that Harding was a member of the medical unit of its second battalion that had sheltered inside Azovstal.

Bo Warren, who spent four months with Harding while serving on the front line with Kurdish forces, said: ‘Everyone loved Pops because he was an older figure who had experienced everything.’

He added that Harding felt that it was his destiny to die in war, after seeing so many friends fall in battle in Africa, the Middle East, the South Atlantic and Ukraine. ‘I don’t think he planned to die of old age.’

A Foreign Office source said that efforts were being made to verify reports about Britons who may have been caught up in the fighting, but admitted: ‘Given the situation in Ukraine, our ability to obtain information and provide consular services on the ground is severely limited.’