Both major parties have promised billions of dollars in new spending during the election campaign despite a leading credit rating agency warning that Victoria is in the weakest fiscal position of any state in 40 years.

A Standard & Poor’s analysis of Victoria’s bottom line, after the government’s infrastructure program is taken into account, shows it is the worst the agency has encountered in an Australian jurisdiction and is deteriorating. 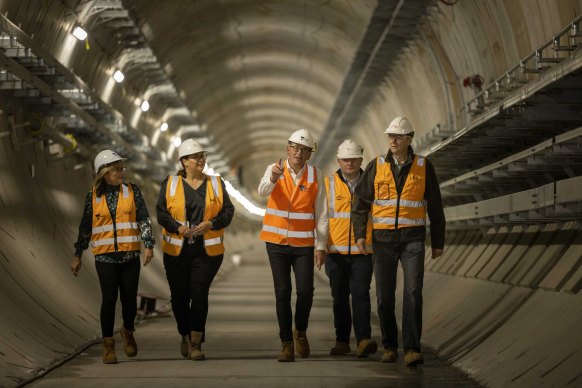 The Metro Tunnel is part of Victoria’s “Big Build” infrastructure program which is contributing to the state’s weak fiscal position.Credit:Photo: Wayne Taylor

“Victoria’s fiscal position over the last few years has been the weakest S&P has seen, and we have been dealing with the states since the 1980s,” S&P director of government ratings Anthony Walker told The Age and The Sydney Morning Herald.

“Their operating position is improving, but governments don’t focus on the true, underlying borrowing needs, which is after infrastructure spending. That is not improving.

“A snapshot of the economic performance of Victoria is misleading. It is outperforming a lot of its domestic peers because it has come through a two-year period where it significantly underperformed. The fiscal accounts don’t tell the same story.”

The analysis, while not likely to immediately imperil Victoria’s AA credit rating, underlines the disconnect between the spending promises of the government and the opposition and the imperative for budget repair.

“It is not broken, but it does need a degree of fixing,” economist Chris Richardson said of Victoria’s financial position. “Whatever you do, don’t have an election campaign that pretends it doesn’t.”

Age readers surveyed as part of our Victoria’s Agenda project have nominated reducing the state’s debt as one of the key questions of the election campaign.

One younger reader surveyed by The Age said: “Are we in a never-ending cycle of politicians kicking the can down the road when it comes to debt?”

Another reader in their 60s said: “I wouldn’t try to reduce the debt, but rather make sure that the borrowings are used to provide valuable community infrastructure, which in turn boosts employment and wealth.”

Standard & Poor’s uses a different accounting method to assess the financial position of governments than that preferred by federal and state treasury departments. The rating agency places a greater emphasis on cash flow and the gross debt borne by governments and all public funded agencies.

Under this accounting method, Victoria is heading towards a tax-supported debt of $195 billion by mid-2026, nearly double that of Queensland.

The state’s after-capital account balance – the money it has to borrow to bridge the difference between its cash inflows and outflows – is currently running at about a third of total revenue.

The current level (31 per cent) is expected to halve next financial year. But there are significant risks that could jeopardise that. Walker said this was the worst ratio S&P had recorded at any time for an Australian government.

Walker said the deficit was caused by three factors: a 60 per cent growth in public sector wages overseen by the Andrews government in its pre-pandemic years; the fiscal shock delivered by the COVID crisis and the state’s protracted lockdowns and the size of the government’s “Big Build” infrastructure program.

The cost of servicing those loans is forecast to soak up 6.5 per cent of total government revenue, compared with 4.5 per cent for NSW.

The official outlook for the budget this financial year has been downgraded twice in recent weeks. At the end of last month, Treasury’s mid-financial year budget update showed the deficit deteriorated by a further $1.8 billion in 2022-23 to $9.7 billion, despite higher-than-expected payroll and land taxes. Then Treasury’s pre-election budget update last week added another $500 million to that, taking the deficit prediction to $10.2 billion.

RMIT public policy emeritus professor David Hayward said the state government had ramped up borrowing to save lives and protect businesses during the pandemic and was now banking on the idea that Victoria’s large deficits would shrink as the economy recovers. 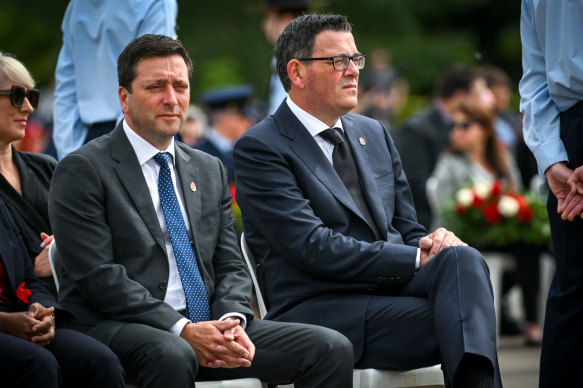 Premier Daniel Andrews and Opposition Leader Matthew Guy are both banking on economic growth to power Victoria out of its fiscal hole. Credit:Eddie Jim

Although the budget predictions support this plan, Hayward said the election campaign had complicated the fiscal situation because of the substantial new spending promised by both major parties.

According to the limited data published by the Parliamentary Budget Office, the Coalition has promised $30 billion in new spending and Labor about $10 billion. Hayward said a more careful analysis of the figures suggested the Coalition had been outspending Labor at a ratio of slightly more than two to one.

The election costings of both parties will be published next week in the final days of the campaign.

Treasurer Tim Pallas said the Parliamentary Budget Office figures suggested the opposition’s only plan was to revert to Kennett-era austerity and cuts. “Matthew Guy’s Liberals have no plan other than to cut and close what matters to Victorians,” he said.

So far, neither major party has pledged significant new revenue or savings measures to offset their new spending pledges. Instead, both Labor and the Coalition parties are banking on economic growth to repair the state’s budget over the long term.

On Wednesday, Premier Daniel Andrews defended his government’s record on borrowing, saying it was necessary to weather the pandemic and meet the state’s infrastructure needs.

“We have got to keep building our way out of these difficult times and that is exactly that Labor has a plan to do,” he said.

Opposition Leader Matthew Guy, in an interview with The Age earlier in the campaign, similarly rejected the need for either spending cuts or tax increases to repair the budget. We are focused on growth-led recovery,” he said. “We will not achieve economic growth by a 1990s economic strategy.” 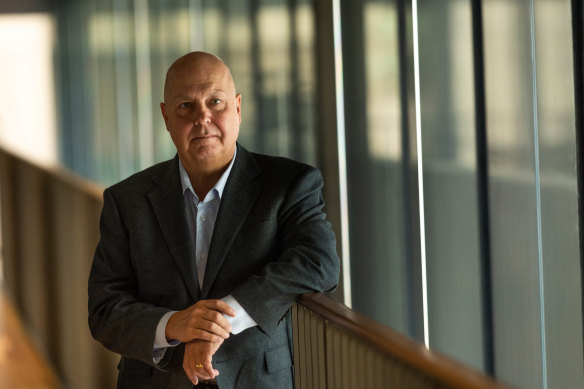 The opposition has promised to legislate a “debt cap” to put a ceiling on future borrowings and Guy claims his promise to scrap the government’s signature project – the Suburban Rail Loop – represents a significant budget saving.

This is challenged by Walker’s analysis. He said the opposition’s decision to redirect about $8.7 billion currently earmarked for the rail project into building more hospitals would aggravate rather than ease the fiscal pressure.

“They have promised no new taxes, the question is how are they going to fund the operating side?” Walker said. “If you build more hospitals you are going to increase your employee expenses by billions of dollars.”

Shadow treasurer David Davis insisted the opposition’s plan to rein in future spending by cutting major projects would work. He pointed out that 45 per cent of recurrent health costs were met by the Commonwealth, and said the Coalition’s plan to refurbish some existing hospitals would require minimal extra recurrent spending.

“The Liberals and Nationals recognise the challenge and have developed a long-term economic plan,” Davis said.

Health economist Stephen Duckett estimates that every dollar spent building a hospital requires an additional 50¢ a year to run it. Using this rule of thumb, Hayward calculates that Labor will need to find an extra $3 billion a year and the Coalition an extra $4 billion to run the new hospitals they are promising they build.

“The additional challenge for the Coalition is that they want to legislate a debt cap and they do not want to raise taxes,” RMIT’s Hayward said. “That is a budget time bomb, which has been planted just at that point in time when spending growth needed to slow down because we are effectively at full employment.”

Walker said a Coalition win on November 26 would require S&P to conduct a “wholesale stocktake” of the state’s fiscal position.

S&P stripped the state of its AAA credit rating at the peak of the COVID crisis, but in June this year held its AA rating stable on the assumption that the state’s finances were structurally sound and after-capital deficits would improve.

“Underpinning our ‘AA’ rating is our belief that economic growth is recovering and that the state’s economy remains structurally wealthy and diverse,” it’s ratings assessment noted.

“Despite recent downturns, Victoria is likely to retain its economic strength, wealth, and diversity on a global scale. This remains a structural feature of the state. A large services sector and infrastructure pipeline as well as lifestyle appeal should support the state’s long-term economic outlook.”

Walker added that these assumptions would be challenged – and Victoria’s credit rating further downgraded – if the state’s finances did not improve as forecast.

Richardson said Victoria’s position was “not disastrous in a global context”, but the next government would face some tough decisions. “This is not panic, end of the world stuff, but we should be better than this and the electorate deserves a conversation around it.”