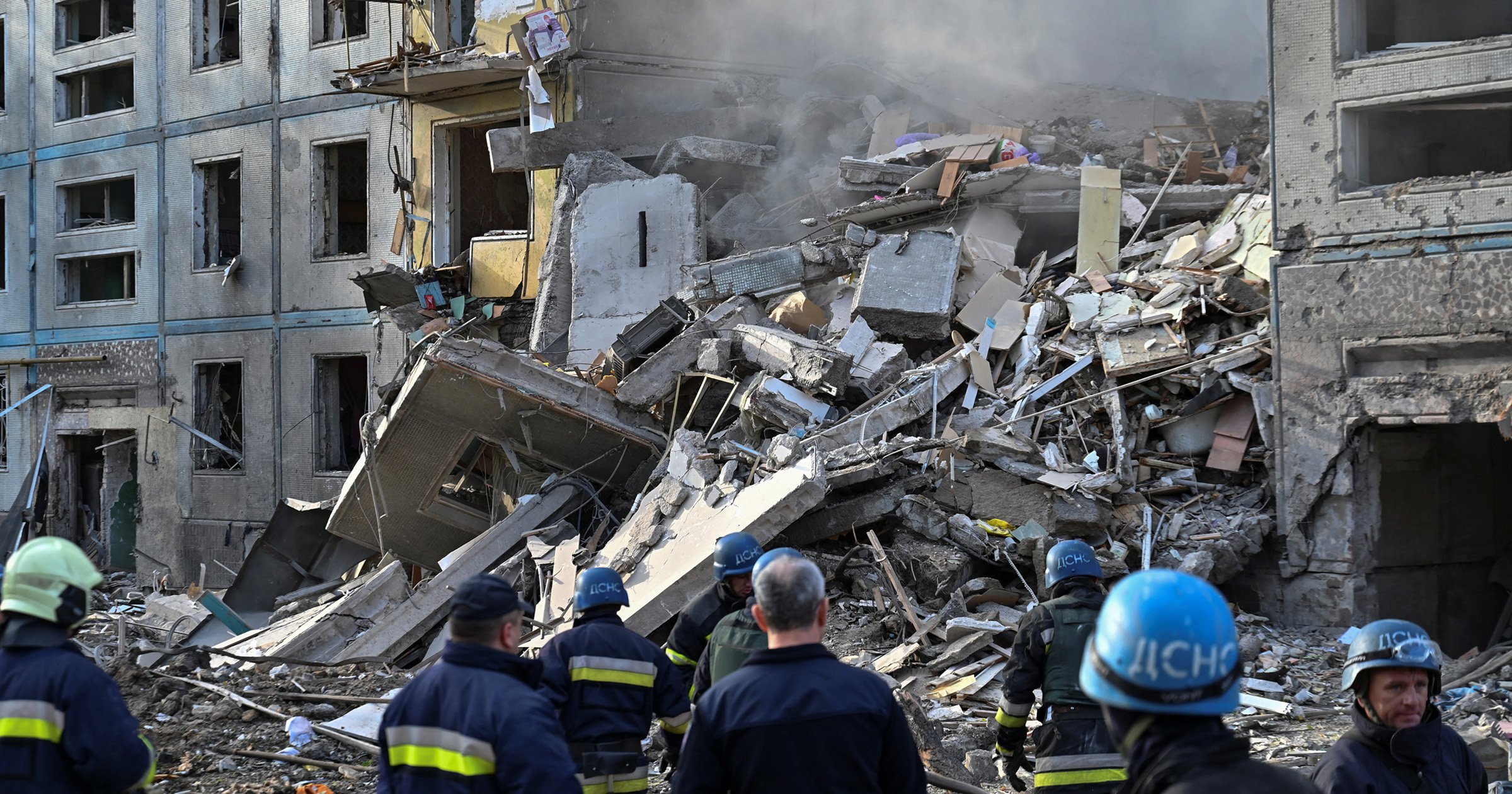 At least 17 people in the Ukrainian city of Zaporizhzhia have been killed after their flat block was shelled by Russians overnight, a city official has confirmed.

The strikes appear to be part of a revenge attack from the Kremlin after a huge explosion destroyed part of the Kerch bridge, which links Russia to occupied Crimea.

‘Information about victims is still being confirmed, but it is already known about dozens of dead or injured.’

In addition to the 17 fatalities, at least 49 people, including six children, have also been reportedly injured in the blast, which demolished five homes and partially destroyed a nine-story building.

‘There may be more people under the rubble,’ regional governor Oleksandr Starukh said on Telegram.

‘A rescue operation is underway at the scene. Eight people have already been rescued.’

‘In residential buildings, just in the middle of the night. Absolute meanness. Absolute evil. Savages and terrorists.’

‘From the one who gave this order to everyone who fulfilled this order. They will bear responsibility. For sure. Before the law and before people’, he added.

Zaporizhzhia has been particularly hard hit by the Russians since the conflict began, with occupiers taking control of the nearby nuclear power plant and allegedly using it as a base for their troops in the area.

The region is one of four territories ‘annexed’ by Moscow in recent weeks, although the city remains under Ukrainian control.

Concerns of a Chernobyl-style nuclear catastrophe, if one of the reactors is hit by an artillery strike, has been a persistent worry since the start of the war.

Earlier this week, The International Atomic Energy Agency, said the Zaporizhzhia plant has since lost its last remaining external power source as a result of renewed shelling and is now relying on emergency diesel generators.

Putin was left fuming after the Kerch Bridge exploded in a mystery fireball, killing three people and damaging an important supply chain.

The shock explosion set fire to the railway line and blew out a section of a road bridge collapsing it into the depths of the Black Sea.

Although Ukraine has yet to officially take credit, they were quick to celebrate the explosion and had been dropping hints about a strike on the bridge for weeks.

It was a massive blow to Russia’s war efforts and a symbolic victory for Ukraine, leading to concerns the Zaporizhzhia shelling may have been part of a revenge attack.

‘Of course, emotions have been triggered and there is a healthy desire to seek revenge,’ said Crimea’s Russian governor Sergei Aksyonov following the attack, which Kremlin officials previously warned could trigger ‘judgement day’.

UK’s Ministry of Defence warned the Crimea bridge blast ‘will highly likely have a significant impact on Russia’s already strained ability to sustain its forces in southern Ukraine’.

The MoD said: ‘The extent of damage to the rail crossing is uncertain, but any serious disruption to its capacity will highly likely have a significant impact on Russia’s already strained ability to sustain its forces in southern Ukraine.

‘The rail crossing was only opened to freight in June 2020, but the line has played a key role in moving heavy military vehicles to the southern front during the invasion.

‘This incident will likely touch President Putin closely; it came hours after his 70th birthday, he personally sponsored and opened the bridge, and its construction contractor was his childhood friend, Arkady Rotenberg.

‘In recent months, Putin’s former bodyguard, now commander of the Russian National Guard, Viktor Zolatov, has provided public assurances about the security of the bridge.’