Fields around Earith and Sutton Gault were left underwater this morning after downpours over the weekend caused the River Delph to burst its banks.

The Met Office predicts warmer weather for the next few days but 50 flood warnings have been issued for England – largely concentrated in the midlands, south west and south east.

The chaotic weather comes after Boxing Day saw up to four inches of snow falling on high ground in the early hours with heavy flurries across southern Scotland, Durham, Northumberland, Yorkshire and the Peak District.

And the Met Office had declared an official White Christmas after two measuring stations in Scotland recorded snowfall on Christmas Day.

Temperatures are set to stay ‘exceptionally mild’ this week but are set to reach a comfortable 59F (15C) on Friday in parts of England – meaning the country will enjoy similar conditions to those in southern European hotspots like Madrid and Athens.

It would also mean the 2011 record of 58F (14.8C) in Colwyn Bay, north Wales would be smashed, making this New Year’s Eve the hottest on record. 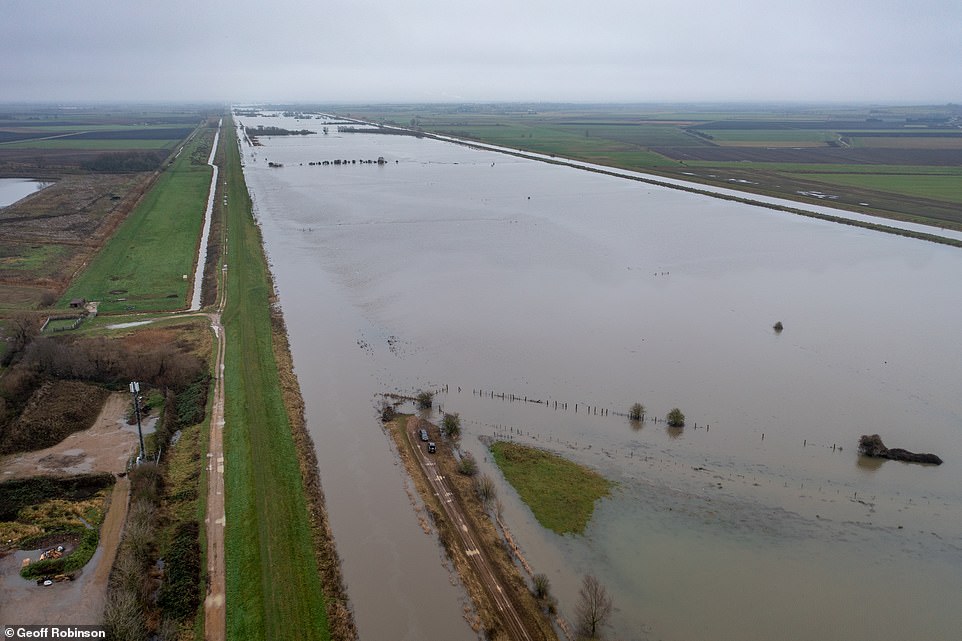 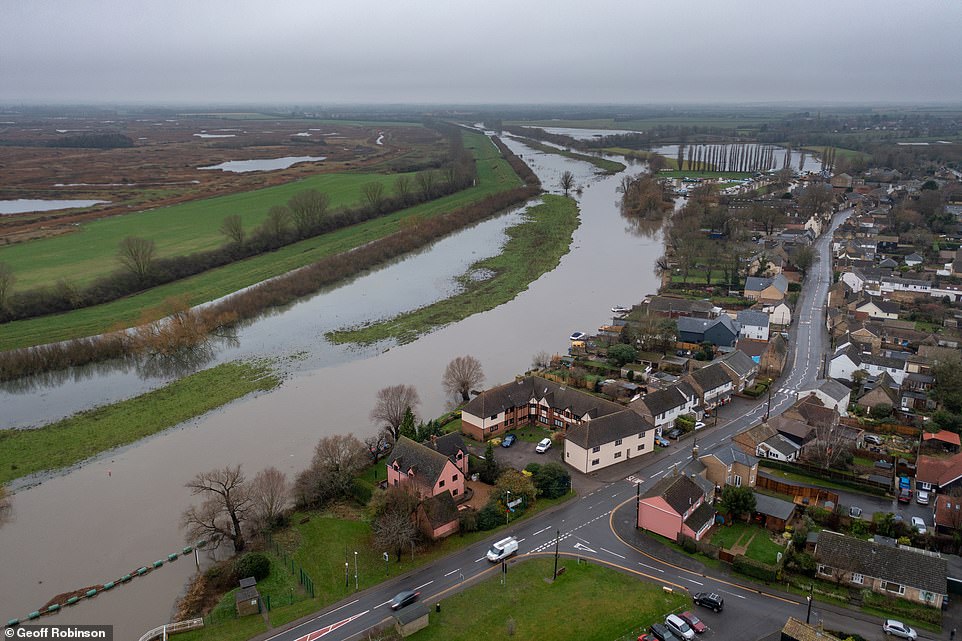 Pictured: Flooded fields around Earith in Cambridgeshire today. Warmer weather is forecast for the next few days but will bring more rain 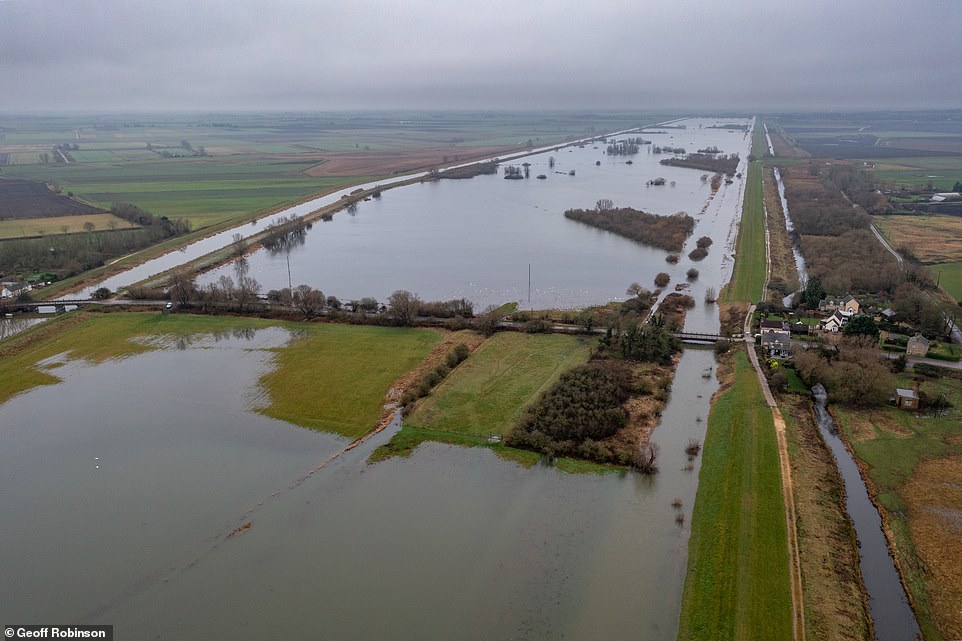 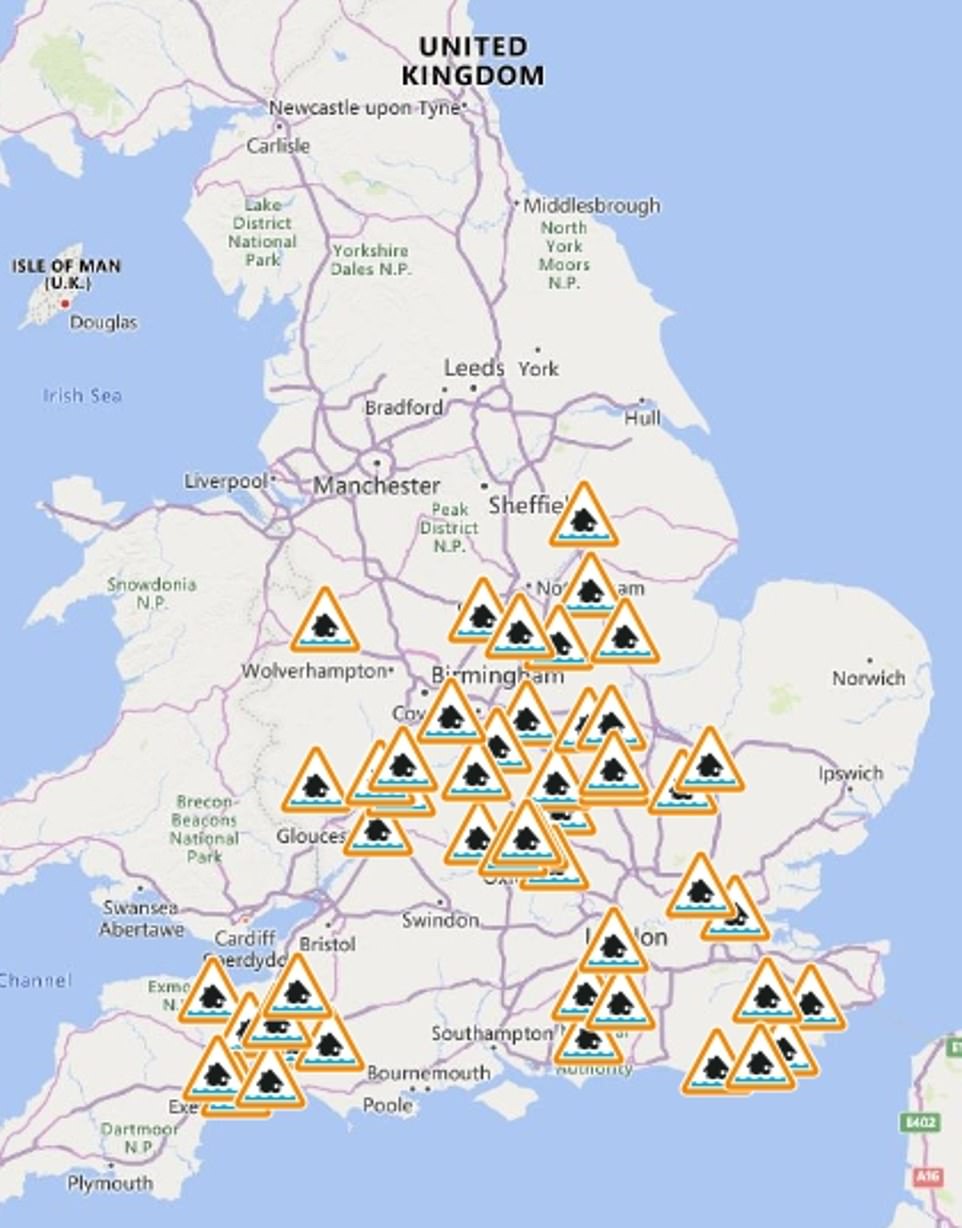 The Met Office predicts warmer weather for the next few days but 50 flood warnings have been issued for England – largely concentrated in the midlands, south west and south east

Wildlife was hit by storms, rainfall and wildfires in parts of the UK in 2021, in what is the ‘new normal’ due to climate change, the National Trust said.

The past year has been punctuated by extreme events and sometimes unseasonal conditions, from dry spring weather that prompted fires to Storm Arwen which brought down thousands of trees across the UK.

The National Trust’s annual review of wildlife and weather for the year highlights how climate change is affecting landscapes and nature – with winners and losers this year.

It was a good year for many orchids, but butterflies had a bad summer and it was a bad nesting season for birds at some of the sites the National Trust cares for across England, Wales and Northern Ireland.

The dry March and an April that was the fourth driest since 1862 saw wildfires at two significant landscapes cared for by the National Trust: the Mourne Mountains in Northern Ireland and Marsden Moor in Yorkshire.

The fire in the Mourne Mountains devastated 200 hectares (500 acres) of land, and the Yorkshire blaze ripped through 520 hectares (nearly 1,300 acres) of moorland, destroying a diverse range of plants and affecting threatened birds in both sites.

On the Dorset coast, a 300-metre cliff fall in April, the largest on the stretch of coastline for 60 years, was caused by prolonged periods of dry weather, rain and erosion by the sea, the National Trust said. 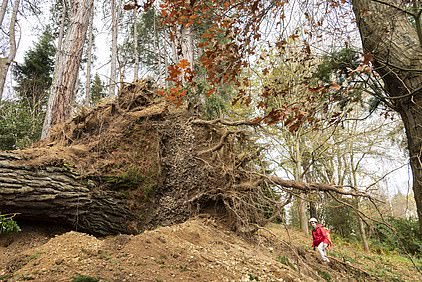 And the late autumn, with a good show of colour, was brought to a sharp end in November with Storm Arwen, which uprooted hundreds of trees at Bodnant Gardens, Wales, and at other sites such as Wallington in Northumberland.

‘What we’re seeing in the UK with the impacts of wildfires and severe storms such as Arwen and Barra, is how climate change is altering our landscapes forever. ‘

A Met Office graphic displayed predictions of 15C in the south, falling to around 13C in the midlands and 10C in the north of Scotland for the last day of 2021. Forecasters said: ‘New Year’s Eve should be drier and a little brighter [than the rest of the week]. Still very mild for many.’

One woman was spotted riding a horse in snow-blanketed woods in County Durham.

But the blizzards disrupted major roads in the North, including the M62 and A66, which had to be temporarily closed in the morning due to icy conditions.

Some drivers struggled to get going at all after their cars were left covered in thick snow.

However, the nippy weather was no match for daring swimmers at Perranporth Beach in Cornwall, and at Ayr, south-west Scotland.

Some wore jolly Santa hats and tinsel as they braved the icy sea.

By yesterday afternoon, much of the snow was thawing, the Met Office said, and milder air from the Atlantic ensured better temperatures than average for this time of year.

The front also brought rain, and heavy downpours in London caused some localised flooding to roads, including the A3 in New Malden.

Scotland will see the best of the weather today, with the rest of England and Wales staying wet as more rain heads north-east from Devon and Cornwall.

Temperatures, however, are set to remain several degrees above the 8C (46F) average for the end of December.

Tomorrow will be breezy, with gusts of up to 40mph blowing rain showers away, and parts of the South will enjoy temperatures of 13C (55F). It will continue to get warmer towards the end of the week.

Sarah Kent, a forecaster at the Met Office, said: ‘It will feel quite mild for the time of year, especially in the South and West.’

The news comes after a British aid group today said that the ten most expensive weather disasters this year caused more than £126 billion in damage – £15 billion more than in 2020.

Each year, UK charity Christian Aid calculates the cost of weather incidents like flooding, fires and heat waves according to insurance claims and reports the results.

In 2020, it found the world’s ten costliest weather disasters caused £112 billion in damage, making this year’s total an increase of 13 percent.

Christian Aid said the upward trend reflects the effects of man-made climate change and added that the ten disasters in question also killed at least 1,075 people and displaced 1.3 million.

The most expensive disaster in 2021 was hurricane Ida, which lashed the eastern United States and caused around $65 billion in damages. After crashing into Louisiana at the end of August, it made its way northward and caused extensive flooding in New York City and the surrounding area.

Spectacular and deadly flooding in Germany and Belgium in July was next on the list at £32 billion in losses.

A cold snap and winter storm in Texas that took out the vast state’s power grid cost £17billion, followed by flooding in China’s Henan province in July that cost an estimated £13.3 billion.

Other disasters costing several billion dollars include flooding in Canada, a late spring freeze in France that damaged vineyards, and a cyclone in India and Bangladesh in May.

The report acknowledged its evaluation mainly covers disasters in rich countries where infrastructure is better insured and that the financial toll of disasters on poor countries is often incalculable.

It gave the example of South Sudan where flooding affected around 800,000 people.

‘Some of the most devastating extreme weather events in 2021 hit poorer nations, which have contributed little to causing climate change,’ the report’s press release noted.

In mid-December, the world’s biggest reinsurer, Swiss Re, estimated natural catastrophes and extreme weather events caused around £186 billion in damage this year.

It said the total represented a 24 percent increase over last year and that the cost to the insurance industry alone was the fourth highest since 1970.