Two Florida cousins say they have wrangled a 300-pound, 16-foot-long Burmese python on their family property outside of Tampa.

The massive snake — which is the biggest ever reported to be found in Zolfo Springs — was first spotted on the side of the road by Aaron Brown, who then called in his cousin William Wilkerson for help, according to Fox 13.

“Once we got him pulled out, it was like, ‘My God! What a snake!'” Wilkerson told the station. 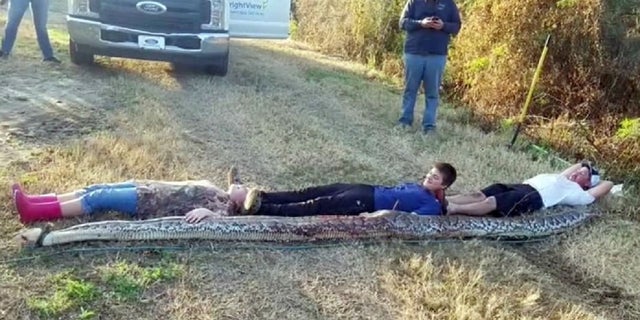 TWITTER LIGHTS UP WITH UFO TALK AFTER LIGHT SEEN IN FLORIDA SKY, TURNS OUT TO BE NAVY MISSILE

The pair hooked and shot the snake before learning it weighed hundreds of pounds and was 16 feet, 4 inches long, Fox 13 reported.

“We measured him and laid him down and the two kids down beside him to get a rough idea and ended up finding a tape measure,” Wilkerson said. 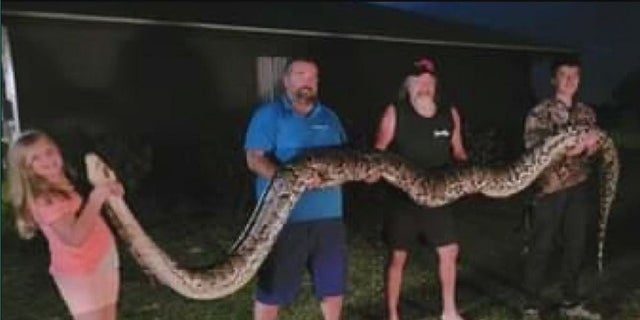 One hundred eggs were found inside the snake, part of an invasive species, Fox 13 reports. (Courtesy Aaron Brown and William Wilkinson)

The reptile was then handed over to Dustin Crum, a snake hunter. After he took the snake to be skinned, 100 eggs were reportedly found inside.

“We are down in the Everglades trying to stop these pythons from migrating further north in all directions,” Crum told Fox 13. “Hopefully this is a rogue snake and they haven’t migrated this far north. These boys stopped an invasion by eliminating a big breeding snake like that.”