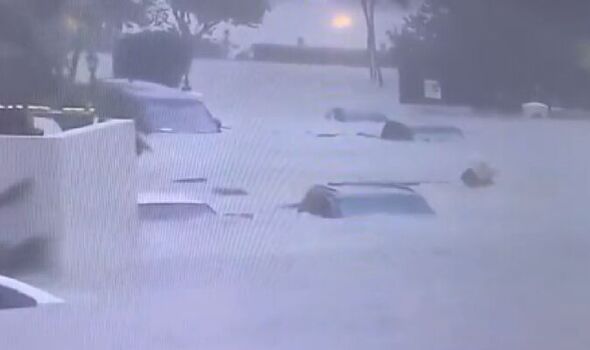 Twenty three people reportedly remain unaccounted for after a boat carrying Cuban migrants sunk off the coast of Florida as the US state braces for a near-Category 5 hurricane. As of 11am local time this morning (4pm BST), Hurricane Ian was 50 miles off the Gulf coast with winds of 155mph.

According to US news outlet BNO, officials said four people were able to swim to shore after the boat sank out of the 27 believed to be on board.

He added that their vessel sank during bad weather linked to Hurricane Ian.

The US coast guard has initiated a search-and-rescue operation as the storm edges closer to making landfall, with flooding seen in Fort Myers at around 6pm BST.

The hurricane was expected to crash into Florida at around 2pm local time (7pm BST) in Charlotte County, about 100 miles south of Tampa and just north of Fort Myers.

The region is home to miles of sandy beaches, scores of resort hotels and numerous mobile home parks.

The US National Hurricane Center said earlier today that the storm was just shy of being designated a Category 5 – the most severe classification with sustained winds of at least 157mph.

It said, though, that Hurricane Ian was expected to weaken after hitting land.

Forecasters say it will unleash a wind-driven high surf, torrential rains that may cause coastal flooding of up to 3.7metres, along with intense thunderstorms and the potential for tornadoes.

Ken Graham, director of the National Weather Service, commented: “I wish this wasn’t a forecast that was about to come true.

“This is a storm that we will talk about for many years to come, an historic event.”