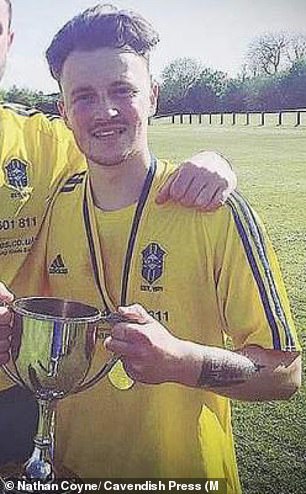 Nathan Coyne, 25, who worked for a charity run by former Premier League club Bolton Wanderers, began taking the drug socially in 2018 but he suffered badly from the ‘come downs’

A football coach hanged himself after his cocaine habit triggered severe bouts of depression, an inquest heard.

Nathan Coyne who worked for a charity run by former Premier League club Bolton Wanderers, began taking the drug socially in 2018 but he suffered badly from the ‘come downs.’

Last December Nathan, who had split up with girlfriend, was found hanged in his bedroom at the home he shared with his sister after referring himself to his GP over his habit. Tests showed traced of cocaine and alcohol in his system.

A coroner recorded a verdict of suicide and insisted his actions were not a ‘cry for help’ but that the 25-year-old was ‘fixated or in some way pre-occupied with suicide, and in particular, death by hanging’.

The hearing was told the father-of-one had played for a number of amateur league sides across Bolton, Greater Manchester and taught young under-privileged children how to play football whilst volunteering for Bolton Wanderers Community Trust.

He also worked as a barber, a fitter. an assistant site manager for a construction company and at factory making blinds and curtains.

In a statement his mother Tracey Coyne said: ‘My son was in good health. He was very sociable and enjoyed working and going out. However I was aware he took cocaine socially and at some stage, the cocaine took over, and I was worried that it was getting out of hand.

‘He wasn’t worried about work. In fact he loved his job and he loved his son. He attempted to deal with matters via his GP but the doctors were very bad at dealing with young people and their mental health and was just fobbed off with pills. There was nothing to say he was going to do anything.’

Friend Grant Bramhall described him as a ‘dutiful and loving father’ to his four-year-old son, but was particularly affected by the Covid pandemic. 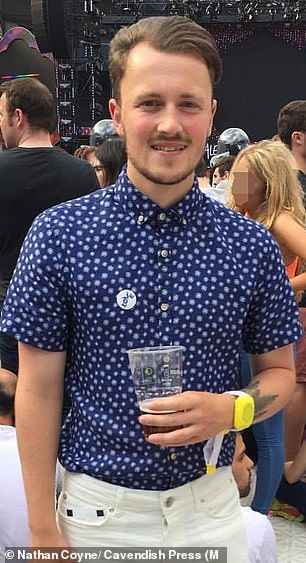 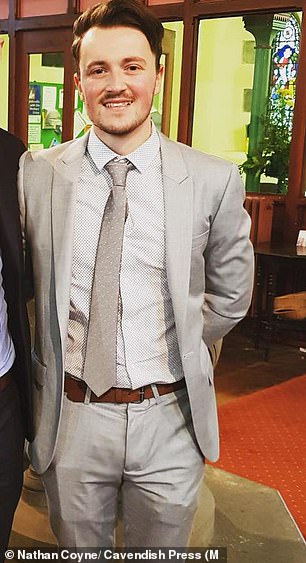 Last December Nathan, who had split up with girlfriend, was found hanged in his bedroom at the home he shared with his sister after referring himself to his GP over his habit

Nathan’s GP Dr Mubushar Ali said Nathan had reported a history of low mood and motivation and thoughts of self-harm back in 2018.

He added that after being referred to the assessment team, Nathan admitted the drugs and alcohol were making him feel worse, not better and after being prescribed antidepressant medication the following year, there was no more interaction with him.

Kirsten Griffiths, team manager of Greater Manchester Mental Health NHS Foundation Trust said: ‘In September 2019 Mr Coyne referred himself for help and support for an issue with misuse of cocaine.

‘He was suffering from depression, but he wasn’t being prescribed anything by his GP at the time. He indicated that he had attempted to take his own life previously by hanging. He was invited to a group session but there was no attendance.’

Nathan’s sister Carla who works at a care home told police she came home from a night shift at 8am and was concerned he had not got up. She went into his bedroom to wake him up only to find him hanged.

The hearing was told he had texted his partner the previous night and said he wanted her to come back and live with him.

His girlfriend, who was not named, said he had ‘been better’ when his she asked him how he was and she thought he seemed fine.

Recording a conclusion of suicide coroner Timothy Brennand said: ‘This was not a cry for help. His actions have spoken louder than any note that he might have left.

‘Having had a close friend, and significantly, other family members suffer a similar fate, it may well be that the deceased was either fixated or in some way pre-occupied with suicide, and in particular, death by hanging.

‘It is tragic for his life and family that he did not make better use of the help that was offered to him.’

At the time of Nathan’s death a former teammate from Lostock-based CMB FC captain Will Archer said: ‘Nathan Coyne was a beautiful footballer and a precious talent.

‘His smile brightened up the changing room and clubhouse and it was a pleasure to have him here.’