“Households are really struggling with economic pressures at the moment,” Croswell says. “People are going to assess, ‘am I going to maintain all my subscriptions and memberships?’. In that sense we’re competing with the subscription to Netflix as much as we are with a membership to the zoo, for example.” 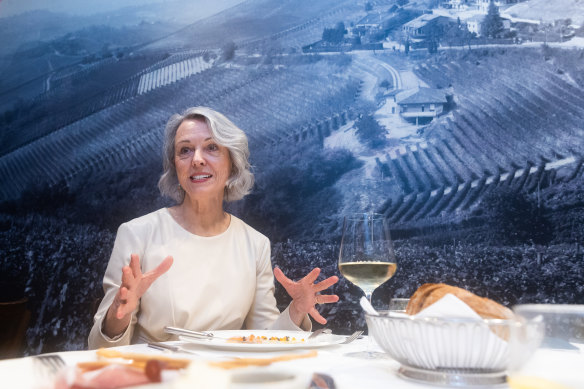 Crosswell took over as chief executive of Museums Victoria – which includes Melbourne Museum, Scienceworks, the Immigration Museum, IMAX and the Royal Exhibition Building – in 2017.

She is its first woman chief executive and led the institutions and their 650 staff and 400 volunteers through Melbourne’s pandemic lockdowns, when they were closed to the public, with only a skeleton staff maintaining exhibitions.

With the doors open once again, a series of blockbuster exhibitions – including the unveiling of the Triceratops fossil at Melbourne Museum in March – has seen visitor numbers up 10 per cent on 2019’s pre-COVID figures.

Crosswell won’t disclose what the actual visitation figures are but says Museums Victoria’s digital reach has also grown to 12 million visits a month, with the museums embracing online programming during the pandemic.

She sees a real desire in Victorians to get back to their public institutions and visit in person rather than simply online.

“I think it’s just something about experiencing the object itself,” she says. “When you look at an object there’s something alive about it, even though it is long, long dead, and that has a wonder to it. That’s what draws people in.”

This is where Crosswell thinks Museums Victoria can compete with a service like Netflix.

“What we’re offering is a really engaging opportunity which is educational, it’s also entertaining, and it’s also something the whole family is doing together,” she says.

Crosswell has come straight from Melbourne Museum to meet me for lunch at Italian restaurant Scopri, just down the road and one of her favourite places for lunch or dinner after work.

Operating for 12 years the restaurant is an institution in Carlton with owner Anthony Scutella taking us through the menu including a blackboard list of specials.

When I ask Crosswell what is good to order, she quickly replies “everything really”. Scopri was the place she chose to celebrate with her adult children when Melbourne’s last lockdown lifted.

“It was a special treat when we all got out of COVID and they all went mad and had cocktails,” she says.

This time we stick to the wine list and order a glass each of chardonnay, which Crosswell likes to drink because it’s “not very fashionable” and I have to break the news to her that the variety has made a comeback. “Oh damn,” she laughs.

Crosswell was born in New Zealand and studied accounting before starting her career in media at a radio station in a management role.

“I started in New Zealand at a time when you could try your hand at anything, so I spent a couple of weeks in the newsroom because I was mates with the journos, and they said ‘come and work with us for a bit’,” she says.

Crosswell held a number of senior executive positions in radio and television in New Zealand before coming to Australia as the director of new media and digital services at the ABC.

She headed up ABC commercial and was chief executive of the broadcaster’s international division before applying for the top job at Museums Victoria.

“Museums Victoria was a left-field role but as soon as I heard about it, I was just really intrigued,” Crosswell says. “At the time the board was interested in out-of-direct-sector candidates but with a relevant sector experience.”

Crosswell says her time at the ABC was good preparation, with both public institutions facing similar challenges.

“Museums were really going through the same disruptions through changing audience consumer patterns that the media went through 10 years ago,” she says. “We’ve sort of caught up now.”

Our entrees are served. Croswell’s dish of lightly cured Kingfish looks like delicate petals of the fish. 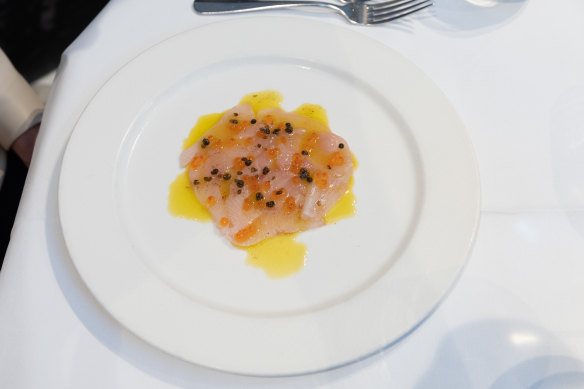 My antipasto plate is more of a platter and its abundance of prosciutto, bresaola and grissini sticks is clearly intended for sharing.

Crosswell says the one thing she doesn’t miss from her time at the ABC is dealing with political issues, although Museums Victoria has its own challenges.

A particular issue for museums around the world is the repatriation debate, highlighted in the ABC show Stuff the British Stole, but Crosswell says Museums Victoria policy is clear that it will repatriate objects.

“The only questions that need to be resolved are those of provenance, so we are working with a number of First Peoples communities and also there’s a repatriation happening at the moment with Canada,” she says.

Crosswell says objects in Museums Victoria’s collections are simply in its “care and custodianship”, so when a repatriation request is made it is fulfilled.

“I think some museums have resisted the notion of repatriation… they’re realising that it’s the right thing to do and it’s in the interests of community, and it’s therefore in the interest of museums.”

Our mains arrive with a theatrical flourish as Crosswell has chosen a show-stopping dish of risotto topped with fresh truffles, which are shaved at the table.

I’ve ordered an equally luxurious lobster pasta but Crosswell generously insists that I must try some of her risotto as well, which is earthy and musky from the truffles found near Scutella’s family farm. 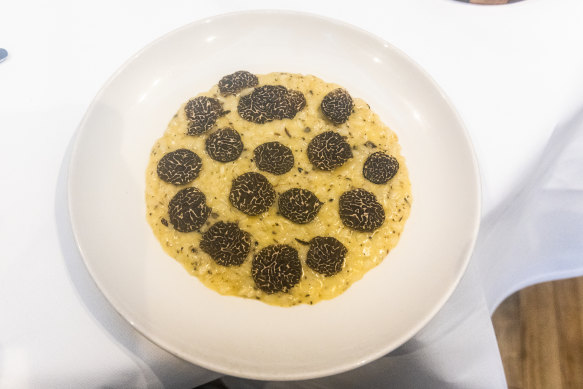 Truffles are shaved at the table for the truffle risotto at Scopri in Carlton. Credit:Lynley Croswell

The restaurant survived during Melbourne’s lockdowns by making up meal kits for customers to order to their homes. But just like experiencing the museums’ collections, it’s a much better experience eating Scopri’s food in the restaurant itself.

“A lot of people within the organisation were doing it really tough,” she says. “But people felt a real sense of pride about that, that we could be part of helping people through it. I think our culture has really grown and strengthened as an organisation because everyone really did pull together to support each other.”

A small number of staff came in as essential workers to look after collection items which were particularly sensitive in terms of temperatures and storage and needed to be checked on, but the majority of staff worked remotely. 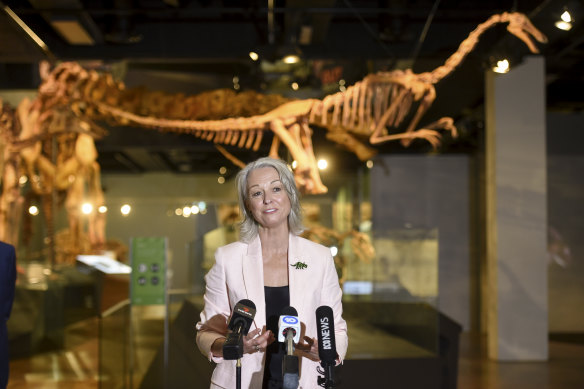 The Triceratops exhibition was planned and constructed through lockdowns, with the Melbourne Museum team working remotely via Zoom with Canada’s Dino Lab, which prepared the fossil dinosaur skeleton for transportation to Australia.

Workers were able to assemble the hundreds of bones at the museum during lockdowns after it was classified as a construction project.

While other museums around the world have crammed their dinosaur fossils all in together, Melbourne Museum has devoted several rooms just to Horridus, as they have named the Triceratops, taking visitors through its life and extinction and the fossil’s discovery.

The star of the show is the fossil itself, raised on a plinth as if it is about to take off into the Montana badlands, spotlit against the darkened room.

It’s visually spectacular and Crosswell says this is the sort of experience Museums Victoria has to deliver, pointing also to the museum’s Tyama exhibition. 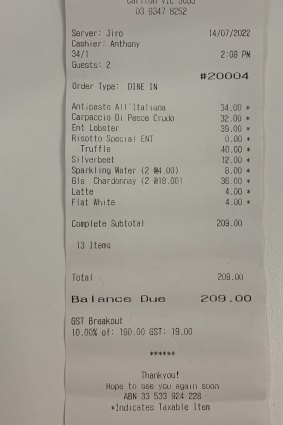 “People want an experience,” she says.

Purists may be perturbed but Crosswell says an emphasis on experiences is how Museums Victoria can lure visitors in from the comfort of their homes and Netflix subscriptions.

“It’s not enough, although it’s still an important part of the experience of museums, to come and look at the objects, understand the history and the significance,” she says. “We also want an experience, especially younger ones coming through, that’s a really important part.”