It’s not on the scale of the recent T20 World Cup cricket competition, but a very different tournament is drawing tourists to Melbourne this weekend.

Australia’s elite competitive jigsaw players have been training like mad and are among hordes of entrants and spectators heading to Williamstown Town Hall for the inaugural National Jigsaw Puzzle Competition on Saturday.

The Victorian champions say they’re in it to win it.

For weeks, Bree Rebeiro, 30, and her mother Jeanette Rebeiro, 59, both of Greensborough in Melbourne’s north-east, have practised by completing one or two 500-piece puzzles per night, in an average time of one hour.

The duo, cheered on by 10 relatives and friends, are confident they can win on Saturday.

“Good luck and enjoy the day,” was Bree’s message to fellow entrants. “It’s all fun. But I want to win. I’m competitive. It’s an amazing prize to win.” 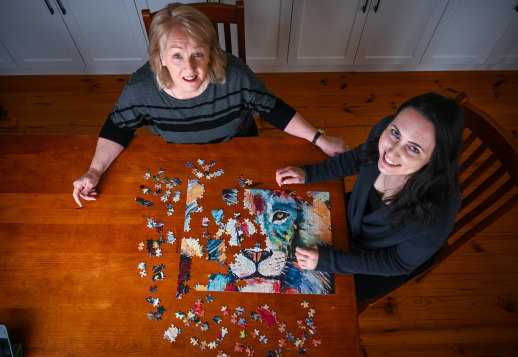 First prize is an all-expenses-paid trip to a German jigsaw puzzle factory and flights and entry to compete in the world championships in Spain.

At the Victorian titles in April, Bree, a structural engineer, won the state singles titles by completing a 500-piece puzzle with the image of a mermaid in 56 minutes and 41 seconds.

And Bree and Jeanette won the state pairs section by completing a lion print in 54 minutes and six seconds.

Asked about their strategy for Saturday, they say they used to find the edges of the picture first, but this time their initial plan will be to sort the pieces into like colours. 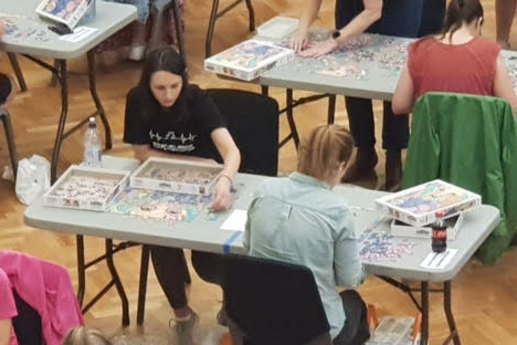 Bree Rebeiro in the individual section of the Victorian jigsaw puzzle competition in April.Credit:Rebeiro family

Bree says she and her mum are so close, “I think we know what each other is going to do”.

In pairs, Jeanette often asks Bree “what do you want?” and makes piles of colours and hands them to Bree. 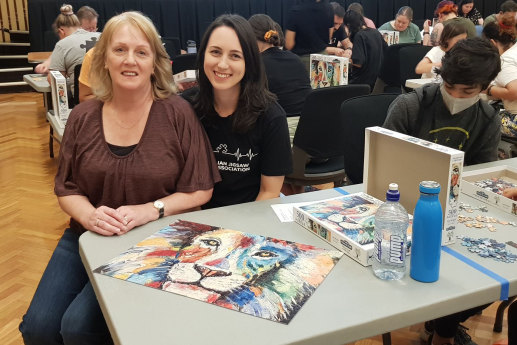 Jeanette and Bree Rebeiro after winning the pairs section of the Victorian Jigsaw Puzzle competition in April.Credit:Rebeiro family

Michael Petzke, 30, of Wangaratta, who lives with autism, said he was “excited and a little nervous” about competing.

At the Victorian titles, he came second in the individual competition with a time of one hour and seven minutes. He thinks he is in with a good chance of winning on Saturday because “not many people are as fast as me”.

Sara Colombini, 47, is among six players and five spectators who have flown from Western Australia. The youngest in the group is 15 years old and the eldest is 75.

They will dress in jigsaw-print clothes, and T-shirts emblazoned with the name of their club, JAKS — Jigsaws Anonymous Kalamunda Shhhhh — who puzzle together at the Kalamunda Hotel on the eastern fringe of Perth. 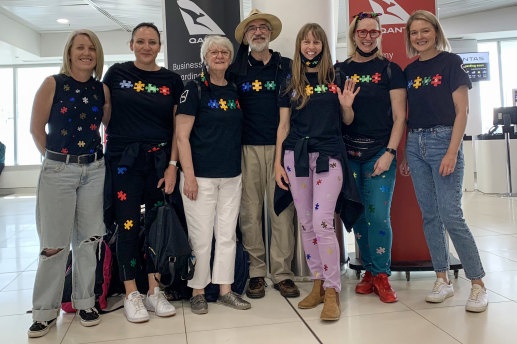 At the WA titles in March, Colombini came second in the individual competition and won the pairs, with Julie Bertram.

“I plan to win, but I’m also realistic that there are some other awesome puzzlers that are really good. I think it’s going to be really close, “Colombini said of Saturday’s national competition.

Brian and Rose Dempsey, who organise jigsaw puzzle events in Willunga, South Australia, are in Melbourne to watch the event.

Brian says they want to support the SA players and be “part of the buzz”. “I think it’s going to be fantastic,” he said.

Event organiser D’Arne Healy said tickets to watch, which are free, had all been snapped up, but there was a waiting list.

Healy said while some players enter for fun, “I know that for these nationals a lot of people are bringing their game-face and they want to win.

“They want to be crowned Australia’s fastest puzzler.”

Healy said jigsaw puzzle competitions can be engrossing to watch.

“It’s interesting to see all these puzzles slowly coming together in different ways, and the sound is quite unique, with everyone flipping pieces of puzzles over at the same time. It’s a delicate shuffling en masse.”