Seven people, including four children, have been taken to hospital after a bus veered off the road and into an embankment near Perisher in NSW’s Snowy Mountains on Monday night.

The bus, containing approximately 40 adults and children, was travelling along Kosciusko Road in Wilsons Valley before the vehicle came off the road about 5.25pm. 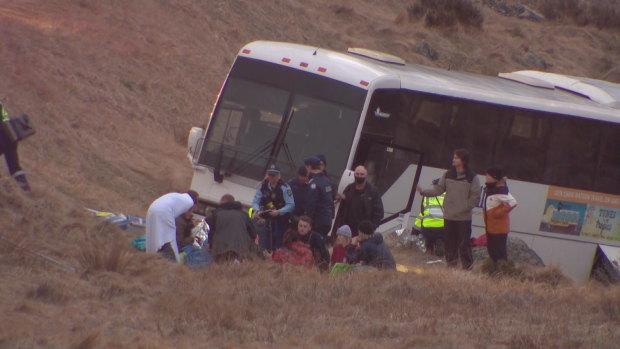 One child and one teacher have suspected broken bones as a result of the incident.Credit:Nine

One man in his 50s, one woman in her 30s, another woman in her 20s and four children were transported to Cooma Hospital in a stable condition.

Two other children were assessed by paramedics but were not required to go to hospital. 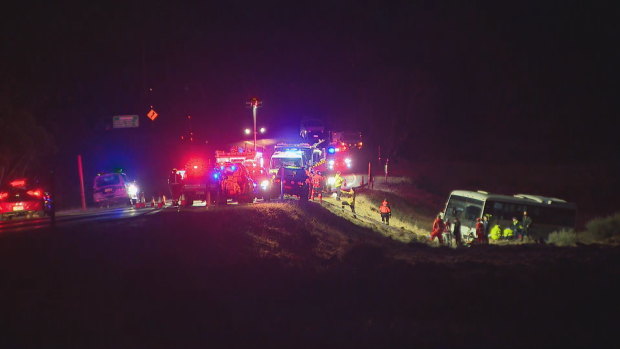 Those travelling on the bus were believed to be a school group.Credit:Nine

“This was a major response for NSW Ambulance paramedics, with crews attending from across the region, including Perisher Valley, Jindabyne and Cooma stations,” she said.

“Everyone did an excellent job in challenging conditions, which included snow, low light and very low temperatures.”

A police investigation is now under way into the incident.

“This would have been a really scary experience for everyone involved, especially the children, but everyone kept calm while we assessed and treated those who were injured,” Barker said.

Meanwhile, a police search will continue on Tuesday for a 23-year-old cross-country skier who went missing in the Snowy Mountains on Saturday.

The Canberra man, who is an experienced skier, has now been missing for three nights. His car was found in Guthega car park by police on Saturday night.

NSW Police have brought in aerial assistance, fearing he may have wandered into remote back country.