The Andrews government is set to lose four of its most senior ministers, including the deputy premier and health minister, forcing a major rethink of Labor’s leadership team following the November state election. 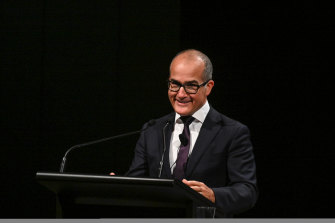 Deputy premier James Merlino is among four senior MPs expected to announce their retirement as early as Friday. Credit:Joe Armao

It will come as a major blow to the Labor Party, which has already been lost several senior ministers over the past three years. Former Special Minister of State Gavin Jennings retired in 2020, while frontbenchers Jill Hennessy and Richard Wynne have already announced they will retire at the last election.

Premier Daniel Andrews is expected to announce the retirements tomorrow.

Steve Dimopolous, Paul Edbrooke, Colin Brooks and Lizzie Blandthorn are tipped to replace them in a cabinet reshuffle, according to Labor sources who weren’t authorised to speak publicly. Vicki Ward and Harriet Shing, both from the Left, have also been floated as a possibility to enter cabinet.

It remains unclear who will replace Merlino as deputy Labor leader. Under Labor’s factional rules, the deputy needs to come from a different faction to the premier. Daniel Andrews is part of the Socialist Left while James Merlino was from the Right.

Roads Minister Ben Carroll, a Right MP, has been touted as a potential replacement. Others say the Premier could handpick Transport Minister Jacinta Allan, from the Left. However, the latter would lead to significant backlash.