Health authorities and police will continue to use the Four Points hotel in the Perth CBD as a quarantine facility while investigating how a security guard caught the more contagious UK COVID-19 strain while working there last week.

WA Police Commissioner Chris Dawson said he had not received any advice from WA Health to suggest they stop using the hotel, where four COVID-positive cases are staying, including two UK variant cases and one case with the South African strain. 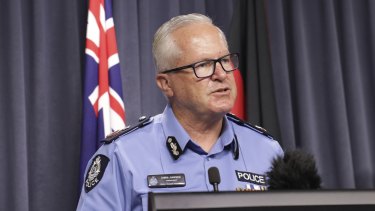 “What we’re doing is examining the procedural issues about how the security guard got infected but there is no information that’s been presented to me to say the hotel is unsuitable,” he said.

On Monday, Arsiyanti Ardie, who is in quarantine at the Four Points, raised concerns that air-conditioning was shared between rooms after she smelled cleaning products being used in other rooms on her floor.

She also said the PPE provided to staff at the hotel was poor quality and some staff were not even wearing it correctly.

“We followed that up. The air-conditioning is not a recycled system inside the hotel, it vents to the atmosphere, so that was inaccurate,” he said.

“The advice we have is the air-conditioning is safe and there is no evidence there is any problem with the air conditioning.”

“The guard was complaint with his PPE and as far as we are aware … there has been no breaches of PPE in that hotel,” he said.

Those comments didn’t wash with Ms Ardie, who was adamant if she could smell cleaning products being used on her floor through her air conditioning vents then air was travelling across the floor.

Doctors wrote to the Queensland government following the spread of the UK variant across a floor of the Grand Chancellor Hotel in Brisbane in early January to request it investigate whether the spread of the disease was airborne. 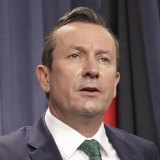 As the virus spread the Queensland government evacuated the hotel and abandoned its use as a quarantine facility.

A Department of Health spokeswoman said Perth’s quarantine hotels were contemporary facilities with modern air-conditioning systems and staff were well trained in the use of PPE.

“Adjustments may or may not be made with the hotel as the investigation proceeds, but there are no plans to relocate all current guests as this would cause a significant infection risk,” she said.

A two-pronged investigation into how the virus escaped the hotel and whether it has spread further has already been launched, with police conducting a probe into the guard’s actions and movements while Department of Health contact tracers are searching people he may have come into contact since infection.

Mr McGowan flagged a plan to ban secondary employment and pay security and other hotel quarantine staff about 40 per cent more to overcome issues experienced during Victoria and South Australia’s recent outbreaks.

On November 19 last year, Mr McGowan said the government had no plan to tell hotel quarantine staff they could not have a second job, but on Monday said he had requested WA Health work on a solution for “at least the last three months”.

Mr McGowan said banning second jobs was hard to enforce but expected to announce a solution by next week.

WA Health has added two more locations visited by the hotel quarantine security guard, including a gym in Belmont.

Anyone who visited Genesis Gym between 9.30am and 12pm on Saturday, January 30, is asked to get a COVID test as soon as possible and isolate until they received their results.

Also added to the list was a convenience store on Milligan Street, in Perth’s CBD, which the man visited between 2pm and 3pm on Wednesday, January 27.