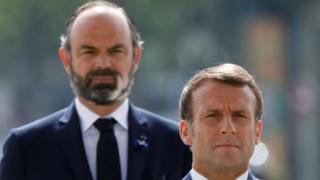 Although Mr Philippe is considered more popular than the president, the ruling La République En Marche (Republic on the Move) had poor local election results at the weekend.

Mr Philippe met the president and they agreed the government would resign.

President Macron promised a “new path” in an interview published on Friday.

A reshuffle has been expected for some time, and it is common practice for a French president to replace a prime minister during the five-year term in office known as the “quinquennat”.

The Elysée palace said in a statement that Edouard Philippe had “today handed in the government’s resignation to the president of the republic, who accepted it”, adding that he would stay in place until a new government was appointed.

Why Macron is changing his team

Mr Macron came to power three years ago but now faces an economic crisis after the coronavirus pandemic.

In the interview with regional newspapers, he spoke of a “very tough” recovery for France, and focused on the immediate priority of saving jobs, as well as economic, social and environmental reconstruction.

Mr Philippe’s future as prime minister had been in doubt for several weeks and he won the mayoral election in Le Havre on Sunday.

A new prime minister will be appointed in the coming hours, and theoretically Mr Philippe could be asked to stay in place.

Mr Macron’s young LREM party has struggled to maintain the initial support it won from voters after his presidential victory in 2017. Dogged by ministerial resignations, it has also seen a number of defections in the National Assembly, losing its outright majority in May.

The party failed to win any major city in Sunday’s local elections, in which Green candidates and their left-wing allies made significant gains.

An opinion poll for Le Figaro and France Info on Thursday suggested three quarters of French voters were looking for political change from the president.

Although many of those surveyed wanted greater focus on social and environmental change, 59% were happy for Mr Philippe to stay in his job.