A 330-day streak of maximum temperatures under 30 degrees in Sydney is under threat, as a true burst of summer heat is forecast to hit the city on Wednesday.

It’s been the longest run of consecutive mild maximum temperatures since 1883, and kept air-conditioning bills down this summer. 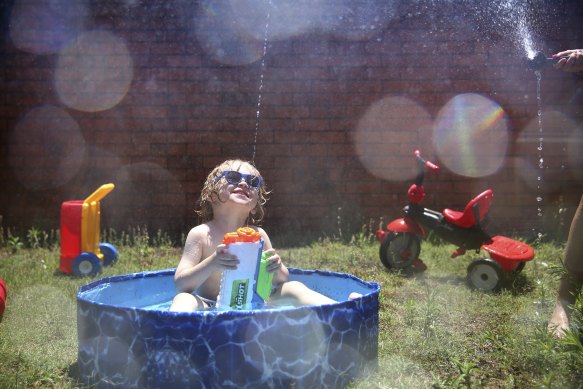 “The Sydney area gets all its heat from the westerly winds in summer dragging continental air that’s hot towards the coast,” Narramore said. “There was a big lack of that last summer and it’s been similar for this spring and early summer as well. On Wednesday, we are forecasting 30 degrees, but that’s dependent on cloud cover and the easterly sea breeze might come in early and cap that temperature.”

Hitting the beach and cranking up the air-conditioning might be the first things that jump to mind when it comes to tackling the summer heat, but they’re not the only options when it comes to cooling down.

While our bodies are tightly regulated in and around 37 degrees, a deviation by a couple of degrees puts us in unsafe territory, says James Smallcombe, senior research associate at the University of Sydney’s Heat and Health Research Incubator.

The body’s main way of cooling itself is by sweating, which is why it’s important to consume plenty of water when it’s hot, to replenish the fluid we lose via sweat. But it’s also important to take measures to avoid overheating as the mercury climbs.

Below are some of the best places to go and ways you can cool down this summer.

The best places to cool down

Senior meteorologist at the Bureau of Meteorology Gabrielle Woodhouse says sea breezes are an important factor in the coolness of suburbs because they bring cooler air from over the ocean onshore.

“Generally speaking, in summer, the suburbs closest to the beach tend to be the coolest because they will experience afternoon sea breezes,” Woodhouse said. “For suburbs further away from the beach, often the sea breeze arrives much later, or not at all, and so the afternoon maximum temperature tends to be higher. Conversely, at night, typically suburbs closer to the ocean will be slightly warmer than those in the west due to the ocean.”

Your best bet may be to hit the coast during the day, and head out west for your beauty sleep.

Regardless of the season, all thermostats at Palace Cinemas are set between 20 and 23 degrees, chief executive Benjamin Zeccola said. It’s a temperature range that’s comfortable and ambient for most people when they walk in, but which can become chilly over the course of a film. “Bring a cardigan because after an hour, with the cool breeze trickling down, it can get cold on the skin,” Zeccola said.

Because of variations up to a couple of degrees, cinema staff separately check both the air temperature and the temperatures of surfaces, including seat backs and walls, to determine if rooms are chilling appropriately.

It’s a hard task to please everyone, but Zeccola said the summer months are the busiest for cinemas. “Every day, there’s someone who will walk out of a film and say it’s too warm, followed by someone else who says it’s too cold,” he says. “But the period from Boxing Day to Australia Day is the busiest for us.”

While areas with multiple access points or very high ceilings can be a challenge, the Australian Museum in Darlinghurst is kept at a similarly steady 22 degrees, give or take one to two degrees, to conserve its objects.

A museum spokesperson said that both temperature and humidity can have adverse effects on organic materials and some minerals such as opals.

“To help with this, we have high-end showcases that keep objects safe in micro-environments,” the spokesperson said.

The best ways to cool down

If you can’t get to a cooler place, there are a few things you can do to cool yourself down.

Smallcombe said that for those without the luxury of jumping in a pool, cooling your environment or reducing your activity levels are effective ways to keep yourself cool. 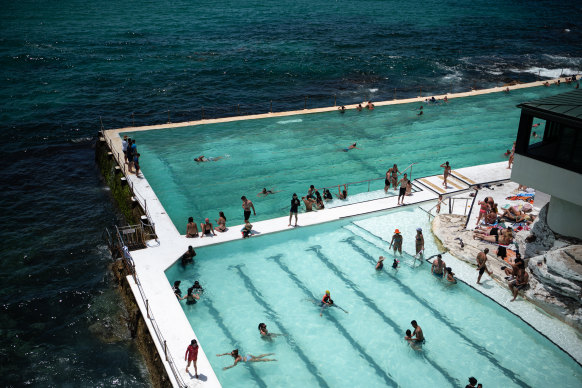 Beachgoers at the Bondi Icebergs pool this summer.Credit:Flavio Brancaleone

“One simple tactic is to reduce our activity levels and avoid strenuous activities during the hottest periods of the day,” he said.

It’s the same behaviour displayed by koalas in hot weather, said a spokesperson at Taronga Zoo, although staff there use additional measures.

“Koalas use their instincts and will often limit their movement to remain cool and conserve their energy,” the spokesperson said. “But there are misters that can be put on all day if needed. Keepers also wrap frozen water bottles in tea towels and attach them to trees for koalas to hug.”

Avoiding hot drinks or spicy food in hot weather are myths, Smallcombe said, but that there are other evidence-backed cooling strategies – similar to those used with koalas – including drinking cold fluids and slushies, submerging arms or feet in cold water, placing an ice pack or damp towel filled with crushed ice around your neck, and dampening the skin.

“Wetting your skin with cool water using a sponge or spray bottle helps increase evaporation, which is the most effective cooling mechanism in the heat,” he said.

While most international guidelines suggest the optimal indoor temperature to be between 22 and 24 degrees, Smallcombe said moving the air using an electric fan can make you feel just as comfortable as chilling the air.

“Fans can be effective in helping to keep us cool in temperatures up to 40 degrees, and use much less energy than air-conditioning,” he said. “This tactic allows us to increase the set point on our thermostats by 3 to 4 degrees without sacrificing comfort.”