General Douglas MacArthur officially assumed command of Allied Forces in the South-West Pacific Area as from midnight on Saturday, April 18. 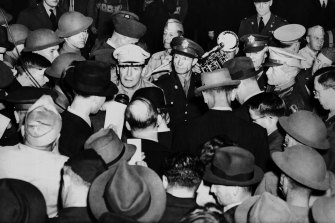 A joint announcement of this fact was mode yesterday by the Prime Minister of Australia (Mr. Curtin) and United States Army headquarters.

General MacArthur, it was stated at his headquarters last evening, will adopt the title Commander in Chief of the General Head Quarters of the South-West Pacific Area.

When a United States spokesman was asked if New Zealand was included in the area he stated, on the authority of President Roosevelt that for reasons of military secrecy New Zealand could not be discussed.

Following is the text of the statement issued by United States Army headquarters: “By agreement among the Governments of Australia, the United Kingdom, the Netherlands and the United States, the south-west Pacific area has been constituted. General Mac-Arthur formally assumes command by virtue of that authority. The following commands, composed of forces assigned to the south-west Pacific area by the respective Governments have been created: 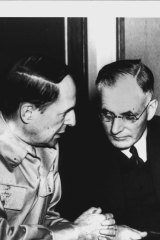 CANBERRA, Sunday. It was revealed today that General MacArthur has been instructed by his directive to prepare to take the offensive an instruction which his record makes certain will be obeyed.

The Prime Minister announced today that, as from midnight last night, the Commonwealth had assigned the combat sections to the command of General MacArthur. All orders and instructions issued by the Commander in Chief, in conformity with his directive, would be considered by the commanders of the Australian forces as emanating from the Commonwealth Government.

Mr. Curtin added that it was not in the public interest to disclose the strength of the forces which had passed to General MacArthur’s command.

Advice was received by the Prime Minister yesterday from the Minister of External Affairs, Mr. Evatt, who is in the United States that the President had approved of General MacArthur’s directive. Mr. Curtin thereupon wrote to General Mac-Arthur saying that he had asked the Government’s advisers to submit with the utmost expedition a statement of the Australian forces to be assigned to General MacArthur’s command, and advice of the earliest date on which the new arrangement could become effective. The date was to be arranged in consultation.

“This is a momentous occasion for the peoples of the United Nations,” Mr. Curtin wrote. “You have received a charter as supreme commander, not from your Government alone, but also from the Governments of the United Kingdom, Australia, New Zealand and the Netherlands. You have come to Australia to lead a crusade, the result of which means everything to the future of the world and mankind.

“At the request of a Sovereign State you are being placed in supreme command of its navy, army and air force, so that, with those of your own great nation, they may be welded into a homogenous force and given that unified direction which is so vital for the achievement of victory.

“Your directive, among other things, instructs you to prepare to take the offensive. I would assure you of every possible support that can be given you by the Government and people of Australia in making Australia secure as a base for operations, in assisting you to marshal the strength required to wrest the initiative from the enemy and in joining with you in the ultimate offensive to bring about the total destruction of the common foe.

“We hope and pray that your military efforts may be crowned with great success.”