Spirit Unbroken in Years of Trial 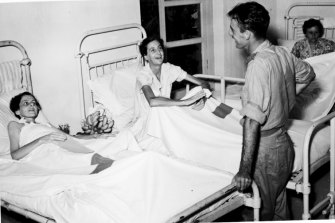 Two members of the Australian Army Nursing Service, Sister Jean Greer of NSW (left), and Sister Betty Jeffrey of East Malvern, Vic, who were for three and a half years prisoners of war in SumatraCredit:Australian War Memorial, #305369

SINGAPORE, September 17 – Further graphic stories which revealed their fortitude during three years and a half of terrible trials as prisoners of war were related today by the party of 24 Australian nurses, who were liberated in Sumatra only 48 hours ago.

It was a sad, if thrilling, sight as the gallant nurses, now older than their years, were helped down from the plane which brought them back to Singapore from their prison camp.

They were somewhat dazed at being among their own folk again. They bravely smiled wan smiles, and it was apparent that the nurses were not crushed—that their grand spirit which had carried them through hard and miserable years was unquenchable.

All will return to Australia by sea as soon as they are fit to travel. The idea of air travel was discarded on the ground of the fatigue that would be caused and that a sea trip would have a great recuperative effect. 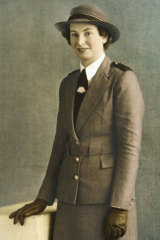 The nurses are survivors of a party of 65 evacuated from Singapore on February 12, 1942. Of the remaining 41, 33 were either drowned off Banka Island or else shot or bayoneted to death in a mass murder on the seashore near Mundok on February 15, 1942, and eight, died in the Sumatra prison camp this year of malnutrition and cerebral malaria.

Among the rescued nurses is Staff Nurse V. Bullwinkel, who is the only survivor of the Mundok horror. She was shot through the side, fell into the water, and lost consciousness, but she was washed ashore. Later she recovered, and struggled into the Jungle. Realising that starvation was near, she surrendered to a Japanese naval officer.

The nurses, who are now in hospital in Singapore, are all suffering from malnutrition, and many have malaria. They were weak when they arrived on the air field, and had to be assisted from the plane, but all were able to walk.

Tears came into the eyes of a veteran A.I.F. sergeant as he looked them up and down, and noted their thin legs, bony hands, pinched faces and straggling hair. But the girls broke out again in animated talk, and said they knew how quickly they would get back their strength.

Many of them wore the thread-worn uniforms in which they had jumped into the sea from the ill-fated naval auxiliary ship Vyner Brooke, which had taken them out of Singapore and was sunk by Japanese bombers near the entrance to Banka Straits.

They had lived in tattered, makeshift dresses during their period of incarceration, and had kept their uniforms away to await the day of liberation. Some looked almost smart in this attire, but they were barelegged, and many of them had on native slippers.

Some cheerily waved brown native straw hats which had helped to protect them from Sumatra's searing sun. A few had close-cropped hair and this seemed to heighten their pallor and to show up their thin cheeks.

Red Cross workers and the increasing crowd of welcoming Australians escorted them to the canteen in the air field buildings, and there they sat, excited and silent, in turns. Some of them drank as many as five cups of tea. "Tea with sugar and milk!" one exclaimed. 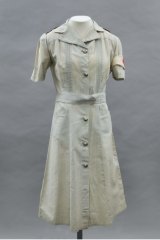 Uniform Vivian Bullwinkel was wearing when she was shot. Credit:Australian War Memorial

Sister Bullwinkel, telling of her terrible experience, said: "When we got ashore from the Vyner Brooke men in the party decided the best way to protect us was to surrender peaceably to the Japanese. The Japanese took out tommyguns, set up a machine gun and ordered us into the sea. There was no mistaking their vicious intentions, so we ran madly into the waves.

"As we were thigh deep in the surf they opened murderous fire, mowing us down like a scene I saw in a film as a child. Women around me shrieked, stiffened and sank.

"I was hit in the left side, and fell unconscious in the water. I can't swim a stroke, but somehow I felt my body being washed about in the waves. I lost consciousness, recovered it, but, lost it again, I was never clear what was happening, but a number of times I felt I was being washed towards the beach. Then I found I was on the beach. Bodies of men and women were lying around me. The Japanese bayoneted the men's bodies, but left the women's alone. That is the only reason I am alive today. I lay still, partly because something told me I would be killed if I moved and partly because I did not care, anyway.

"I lost consciousness, then woke again among the bodies. Hardly knowing what I was doing, I dragged myself into the jungle, where I think I fainted again through loss of blood.

All I remember is struggling to get water from a nearby spring. I think I must have lain unconscious for what I afterwards found was three days."

Sister Bullwinkel at last crawled back to the beach, and found signs of life in a young Yorkshire Tommy. His arm was severed, and he had other wounds, but Sister Bullwinkel slowly regained her strength, and nursed him for a fortnight. She obtained food from friendly natives. She was unable to get sufficient food for them both, and decided, that the best thing was to surrender to the Japanese. She managed to assist the Tommy down the road, where they met a small car driven by a Japanese naval officer. He took her to a gaol, where she found 31 other Australian sisters. Eight later died in Sumatra, and the remaining 23 reached Singapore with her yesterday. These sisters escaped slaughter, because they were washed ashore further down the beach, after being in the water from 14 to 20 hours.

A correspondent began to apologise for asking Sister Bullwinkel to recall the terrors. "No," she said, "this story is one that must he told everywhere in case people believe the Japanese are not as black as they are painted. I only hope that in future people will realise they are not humans." 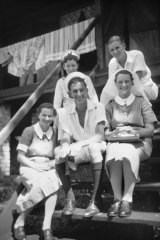 Nurses Shirley Graham (left) and Mavis Harris sit with members of the Royal Australian Navy, Both would become POW’s during the war.Credit:Australian War Memorial

Assistant Matron Janes, of Melbourne, told her story without emphasis and with a good deal of understatement, but I give it as she told it. "After our arrival at this place," she said, "it is called Mundok, we were called in separately to a room where there were Japanese officers. I went in first, and my experience was typical of the others. A Japanese officer told me 'you must work for the Japanese army.' I replied, 'nursing is my only work.' The officer shouted again, 'you must work for the Japanese army,' but I repeated my refusal. The officer then said, 'You will starve, there will be no food for you.' I remained silent. He shouted, 'how would you like to die?’ I answered, 'we would prefer to die.'

"We were taken to Palembang and put to work in a hospital there. Our worst time physically came when we shifted to the Lahat area. There we were put to work in the blazing sun to clear an area to make gardens. We worked from dawn until dusk with picks and hoes.

"The Japanese stood over us, but they never actually struck us. We had raw blistered hands, but we had to work just the same day after day. When we had made the gardens we were turned into water carriers. At daybreak we were paraded and kept standing for three-quarters of an hour in the sun. Then we were issued with buckets and started our day's work. First of all we had to walk about half a mile for water, and then bring it back in endless relays for baths for Japanese officers and privates. Then we had to water the gardens we had made.

"At dusk we had to fetch water for our own use, but often the Japanese refused to allow us any water for washing, sometimes even emptying out the buckets we had brought for ourselves.

"We were weak and exhausted, but we were too proud to let them see us down, and we kept going. We got the absolute minimum of food—a little rice, a few jungle vegetables, and rarely scraps of meat. When we committed 'offences' the punishment was to stand us at attention for hours in the burning sun. On one occasion two sisters, one of them very ill, were forced to stand for hours in the sun until finally the sick sister collapsed. She subsequently died. Their crime was that a Japanese guard had entered their quarters and found holes in one of the walls which had been there before the nurses' arrival. He accused them of making the holes, for which they were punished. He knew perfectly well the holes were there before, but used them as an excuse to exercise his sadism. Eight of our nurses died, mainly from sheer starvation and overwork."

Major W. A. Tebbutt, who was attached to the Head Quarters, Eighth Division, A.I.F., at Singapore, was aboard the Vyner Brooke. He has prepared an official report made from his own observations and statements to him by witnesses whose names and descriptions are given.