The driver and engineer of the Sydney-Melbourne Daylight Express jumped for their lives from the burning locomotive after an explosion ripped through the engine at 8.25 last night. 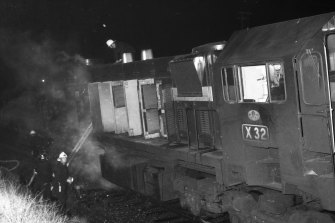 Seconds after the express stopped, the 172 passengers fled from the 15 carriages.

About 40 soldiers from Puckapunyal, who were on the train, helped young mothers carrying babies, and elderly couples.

The express was about 12 miles out, coming to Melbourne, near the Tullamarine freeway when the explosion ripped through the diesel locomotive.

Passengers said the initial explosion was followed by three major explosions. They believe the train struck something on the line that touched off the explosions.

Flames leapt 50 feet backwards along the carriages, blowing out windows and filling the first two carriages with fumes and smoke. 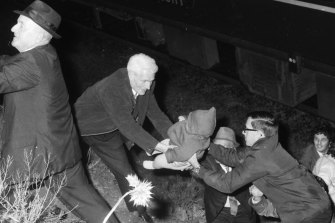 A baby is rescued from the train.Credit:The Age Archives

The train driver, Leo Hawkinson, of Wodonga, said he “rode the train to a halt and jumped for my life.”

“For a few moments I thought I couldn’t get out and I rushed at the cabin door and leapt away from the flames,” he said.

The train engineer is Keith Murray, also of Wodonga.

Nobody aboard the train was seriously hurt, but many were shocked and had cuts and bruises as they fled.

Three fire units battled the blaze in the locomotive for more than half an hour before the fire was out.

About 1000 gallons of fuel spurted from the locomotive when explosions ripped open its tanks.

Diesel gasoline gushing from the split tanks ran more than 200 yards along the ground beside the track.

A replacement diesel locomotive was moved in an hour and a half later to take the train to Melbourne.