On this day in 1972, the news that Pastor Doug Nicholls was created a Knight Bachelor for “distinguished services to the advancement of the Aboriginal people”, the first Indigenous Australian to receive a knighthood, was featured on the front page of The Age.

Aboriginal and Torres Strait Islander readers are advised that this article contains images of and references to deceased persons. 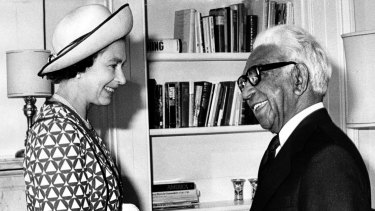 Sir Douglas, director of the Aborigines’ Advancement League, is one of 20 new Australian knights.

Sir Douglas was created a Knight Bachelor for “distinguished services to the advancement of the Aboriginal people”.

“Officialdom gave it to me I hope they will now take notice of me,” he said.

Sir Douglas, the 65-year-old champion of his people and former Fitzroy footballer, said he saw the award as a recognition of the Aboriginal people. 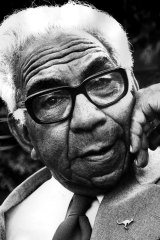 “I only hope it will encourage others of my people to strive to make something of themselves in the Australian community”.

Sir Douglas and Lady Nicholls were given a celebratory party by the young people at the Aborigines hostel in Northcote.

“The knighthood is a great moment for me, my family and my people,” he said.

“I am the first Aborigine knighted but certainly not the last.”

Sir Douglas said he hoped the knighthood would help in getting the issues the Aboriginal people are striving for recognised.

Most important, he said, was recognition of Aboriginal land rights.

“I will also continue striving for better medical care for my people especially in the Northern Territory.

“I also want the State Government to set up an Aboriginal hospital in the Warburton Ranges,” he said.

Early this year Sir Douglas came out of retirement to act as public relations officer for the Aborigines’ Advancement League having resigned six months before as league director.

Pastor of the Churches of Christ Aborigines’ Mission in Fitzroy, he had a spectacular sporting career, winning the Nyah Gift and Warracknabeal Gift as well as six times representing Victoria during his several seasons with Fitzroy.

5ir Douglas was born at Cummeragunja in NSW just over the Victorian border.

Sir Douglas married Lady Nicholls in 1942. They have a son and a daughter.