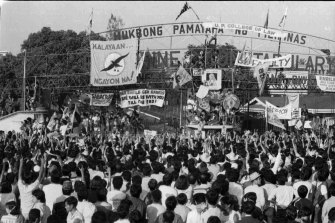 Part of the “People Power” revolt in the Philippines that helped topple Marcos. Credit:AAP

In Washington, the US Secretary of State, Mr Shultz, announced that Mr Marco had resigned and that the US had recognised the government of Mrs Corazon Aquino.

Mr Shultz said that Mr Marcos would be welcome in the US if he asked for asylum there.

Unnamed sources in Washington said they believed Mr Marcos was about to leave the Philippines on a US air force jet.

Asked if he knew where Mr Marcos would go, Mr Schulz said: “He is certainly at Clark Air Field. I have no idea where he will go from there.

“We are prepared to offer safe haven to President Marcos, members of his family and his close associates, including General Ver.

“Throughout this process we have been in close touch with President Marcos and his family and we want to see them continue on in dignity and honor and we will do everything that we can to see this comes about.”

Mr Shultz said that Mrs Aquino supported the presence of US bases in the Philippines.

“We wish to cooperate with the new Government,” he said.

In Manila, General Fidel Ramos, speaking on television, appealed to the public not to loot the presidential palace.

“At this stage I would advise anyone in the Malacanang area to avoid premature celebration,” he said.

“Let us not create further trouble by going to the palace and possibly looting. That is the property of the Filipino people.” 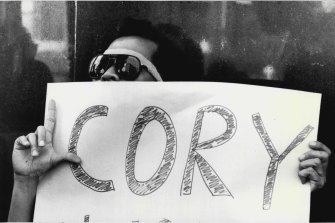 As the new flashed across the capital, crowds of joyful Filipinos thronged the streets.

“You’re hearing the rebirth of democracy,” a radio announcer boomed over a public address system.

Fearing that the people would destroy buildings erected under the Marcos regime, General Ramos said on TV: “Let us try to preserve these places.”

He then said: “I am authorising our people to use the freedom park in front of Malacanang as your freedom park. You can use this as a picnic place or gathering ground for the rest of the week while you celebrate.” It is believed this authorisation was given by Mrs Aquino.

General Ramos then said he was leaving the TV studio for Malacanang: “Please wait for me, I am on my way,” he said. “Let us go and protect and preserve Malacanang for our beloved President Cory Aquino.”

The general said he was now responsible for the safety of Malacanang.

At least 1000 marines marched out of the presidential palace and eyewitnesses reported that their commander had said “the war is over”.

The commander, Colonel Fortuno, said his men were returning to their barracks located across the river from the palace.

About 200 troops who had been guarding a road leading to the palace moved back and chatted with about 900 opposition supporters who handed them flowers.

The marines had been regarded as the backbone of forces still loyal to President Ferdinand Marcos.

Both Mr Marcos and Mrs Aquino had earlier in the day been sworn in as President in separate ceremonies. 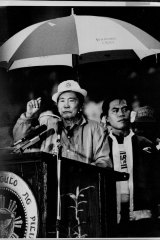 President Marcos during an election rally at Rizal Park.Credit:Peter Solness

Mr Marcos took his oath of office at the palace before the Chief Justice of the Supreme Court, Ramon Aquino.

The ceremony was held in Maharlika Hall – named after the guerrilla unit Mr Marcos led during World War II, the record of which, along with Mr Marcos’ war decorations, has been attacked as fraudulent.

Mr Marcos had gone ahead with his inauguration despite intense pressure from the United States to resign.

He had held talks with senior US officials in the 24 hours ceremony.

Three kilometres away, Mrs Aquino was sworn in by Senior Associate Justice Claudio Teehankee in a makeshift room at the Club Pilipino.

In what she called executive order no.1, Mrs Aquino named Doy Laurel, earlier sworn in as Vice-President, as her Prime Minister.

General Ramos, who defected as deputy chief of staff of the armed forces and rallied the reformists, was promoted to full general and made chief of staff.

Mrs Aquino made no mention of the possible fate of Mr Marcos.

She has always held him and his chief of staff, General Fabian Ver, responsible for the assassination of her husband Beningo.

Her proclamation as President was made by about 60 members of the 190-member National Assembly, the Batasang Pambansa. Most were from the opposition but a few were defectors from Mr Marcos’ New Society Movement.

In their signed proclamation, the members of the Batasang Pambansa declared the previous proclamation of Mr Marcos as President null and void because of massive fraud during the election.

Mrs Aquino said in her acceptance speech that during the Marcos years “we Filipinos became exiles in our own land, we who are at home only in freedom. We are home again.”

The role of the Catholic Church in the movement to overthrow Mr Marcos was underlined when the ceremony was opened by Bishop Frederico Escaler.

Later, the Archbishop of Manila, Cardinal Jaime Sin, congratulated the new government of Mrs Aquino and pledged loyalty to her, Mr Laurel and General Ramos.

At least 12 people were shot dead by forces loyal to Mr Marcos in street fighting.

The rebel television station, Channel 4, broadcast urgent appeals for blood donors to attend hospitals where the wounded were being treated.

A British intensive care unit (ICU) treating Covid-19 patients has opened its doors to show what it’s like on the front line. Medics were eager…

New York: The steep rise in coronavirus deaths appeared to be levelling off Monday in hard-hit New York, echoing a trend underway in Italy and…