Senator Jo Vallentine was among 98 protesters arrested yesterday on various charges at a rally by 600 people wanting to close the joint Australian-United States base at Pine Gap. 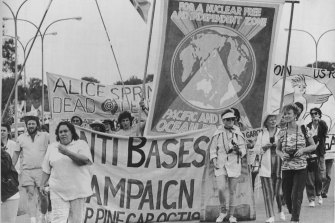 The rally stretched the security services at the base to the limit for two hours as protesters cut through the main gate and security fences to enter base property, jumped other barriers, climbed a security camera tower and made their way on to what the protesters claim is the most important US base on Australian soil.

A large contingent of Australian Protective Service officers arrested many protesters, but late yesterday it was believed several protesters were still at liberty within the base, in hilly, wooded country 19 kilometres from Alice Springs.

More arrests are expected during further protests planned for today.

The 10-year lease on the joint facilities expired at midnight last night. Either Canberra or Washington can now cancel the Pine Gap agreement at a year’s notice.

The protest was part of a week of demonstrations at the base and around Australia. Between last Wednesday and Saturday 21 people were arrested at Pine Gap.

Yesterday’s arrests were preceded by an hour of street theatre, singing and entertainment outside the gates. 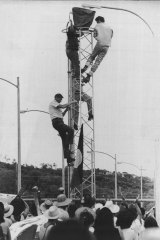 Senator Vallentine, the first to be arrested yesterday, climbed through the barbed wire fence 150 metres from the main gate after taking part In a joint reading of an “eviction notice” to the Reagan administration.

She was immediately charged with trespassing.

She was released on bail and will appear in Alice Spring Magistrate’s Court tomorrow.

Of those arrested, 86 others were charged with trespassing and 11 with causing criminal damage.

All but one were released yesterday and will appear in court tomorrow, Thursday or next week. A Darwin magistrate is being flown in to assist the local magistrate.

Immediately before she was arrested, Senator Vallentine said she was aware of the consequences of crossing the fence.

“The Nuremberg principles oblige us to take action.” she said “For many years we have been doing the legal things… but the Australian Government has taken no notice

Senator Vallentine’s arrest followed the arrest on Saturday of Dr Bill Williams, of Geelong, who attempted to present to US officials a letter from 59 Geelong doctors opposed to the base.

US officials refused to come to the gate and Dr Williams accused them of contempt for the Australian public. He then jumped through the base fence and was arrested.

In an eviction notice read outside the base yesterday, organisers of the rally claimed that Pine Gap was used to spy on Pacific and other countries, exposed Alice Springs to the threat of nuclear attack and was used “to support the destabilising and war-fighting foreign policies of the Government of the United States of America which have directly caused the further escalation of the nuclear arms race”

The Opposition Leader, Mr Howard, yesterday described the American base at Pine Gap as a security cloak for Australia and an important part of the West’s security plans.

He told the Liberal Party’s New South Wales council meeting that in no circumstances should the base be used as a bargaining weapon to secure more satisfactory trade deals.