First published in The Age on December 1, 1990 Hugo Kelly

Compass takes off, but will it soar

Compass Airlines leaves the tarmac for the first time at 6.55 this morning. But even before its inaugural flight, it had paid the price for innovation. 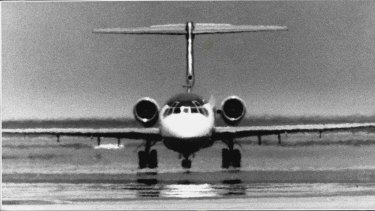 A Compass plane in action in 1992. Credit:Andrew Taylor

Passengers on the airline’s first flight from Sydney to Melbourne will pay $165, $54 less than the standard Ansett Australia or Australian Airlines economy fare. But the “Big Two” could not let the big discount stand, and both have quickly introduced their own version of the Compass fare.

It has been a common pattern in recent weeks. As soon as Compass announced a new discount, Ansett and Australian would follow. The advantage for the established airlines is that they have been able to offer discounts before Compass has got off the ground.

Today’s first flight is the consummation of airline deregulation. Compass was given the imprimatur by the Civil Aviation Authority last night, when it received its air operator’s certificate, an essential document for any new airline. East-West was the last large airline to receive this certificate – in 1948.

Compass also signed yesterday an interim agreement with Australian, which allows it access to terminals at airports in Brisbane, Sydney, Melbourne and Perth. 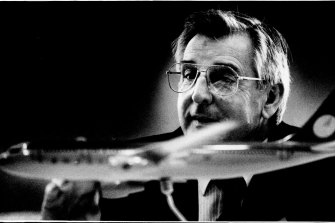 Bryan Grey, founder of Compass Airlines, on May 22, 1990.Credit:Steve Christo

To celebrate its launch, Compass announced a 55 per cent discount on east coast flights. Passengers, who must book 21 days in advance, pay $200 to fly Melbourne-Sydney return.

Not surprisingly, Australian immediately matched the price, and Ansett is about to announce the same discount.

One of the few initiatives so far untouched by the big two is the Compass offer to fly one child free with every two adult tickets.

Ansett and Australian are obviously taking the challenge from the newcomer very seriously.

Mr Grey was certainly correct when he said his airline’s initiatives have given travelers cheaper flights. The main problem now for Compass is that marketing initiatives are notoriously easy to follow.

As an aviation observer said: “Bryan Grey was running East-West at a $1 million-a-week loss. He proved he can run a good airline. Now he’s got to prove he can run a profitable one.”

The Ansett group, meanwhile, is flexing its muscles. The group this week unveiled a new airline, Ansett Express, which will operate jets to regional centres along the east coast.

The new airline will replace the regional operator, Ansett New South Wales. Ansett Express is expected to expand to double the size of Ansett NSW by the end of next year, according to its general manager, Mr Jon Hutchinson.

Mr Hutchinson says Ansett Express services would complement those of its older sister, Ansett Australia. “For example, our services to both Canberra and Launceston are in addition to those already provided by existing Ansett Australia flights,” he said.

The move follows the trend in the United States over the past decade where large airlines have gained networks of regional airlines to cover both small and large markets. This is something a small operator such as Compass cannot emulate.

Compass, with its relatively small cash flow, cannot afford the massive sums that Ansett and Australian have spent on advertising during the past two months. Ansett Australia, in particular, chose a fresh promotional direction in an attempt to turn around its poor market image. Its latest television campaign features the airlines different name and new livery.

The airline changes its name last month from Ansett to Ansett Australia. It had been losing a two-horse race for more than two months and needed a boost, if only in image, to lure back passengers and attract foreign passengers.

Overseas visitors, in Australia on holidays or business, usually chose the airline with the identifiable name – Australian. Ansett had to slip the word Australia somewhere if it was to attract more international passengers.

It appears that the name change, accompanied by the advertising campaign, is working. Ansett officials say forward bookings over Christmas and the New Year are the best ever.