The remains of an unknown Australian soldier will be laid to rest in the Australian War Memorial in Canberra today. 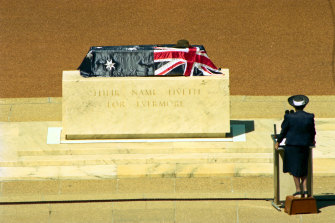 The Unknown Soldier returns home and is interred in Canberra.Credit:Palani Mohan

But the decision to exhume him from a battlefield cemetery in France or Belgium has been criticised by the Victorian president of the RSL, Mr Bruce Ruxton.

Mr Ruxton said yesterday the Victorian RSL’s executive believed the decision to return the remains of the World War I digger to Australian soil was wrong.

He (the unknown soldier) should not have been dug up and brought back home after 75 years of laying alongside his mates,” Mr Ruxton told radio station 2GB.

“In fact, over the past 25 years, the matter of an unknown soldier has been brought up quite regularly at RSL conferences around Australia, and the idea has been trashed every time it’s surfaced.”

But the national president of the RSL, Major-General William “Digger” James, said yesterday Mr Ruxton’s view was not widely held in the RSL. 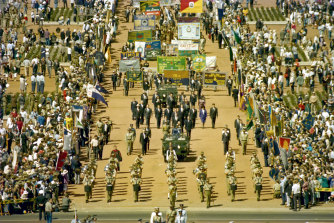 The unknown soldier journeys to the final resting place.Credit:Palani Mohan

“Bruce is entitled to his view, I happen to hold a different view. He represents the Victorian RSL and I know that that is not the view of the rest of the states.”

Major-General James said the idea to bring an unknown soldier home was first suggested in 1922 and had been debated in Parliament several times since.

But the idea was opposed by the official World War I historian, C. W. Bean, who argued that an unknown soldier should not be brought home until a national war memorial was built.

Major-General James said he believed it was now appropriate that the soldier be entombed in the Australian War Memorial’s Hall of Memory.

He said about 12 World War I veterans who plan to attend today’s funeral procession and ceremony had told him they were thrilled by the decision.

He said it was fitting that Australia joined the many nations that have a special tomb of the unknown soldier for the many soldiers killed in war about which nothing was known, other than their nationality.

He said he expected more than 25,000 people to attend today’s special Armistice Day ceremony in Canberra.

The ceremony has been timed to coincide with 11 am, the official time when all hostilities ceased on the battlefields of Europe, bringing World War I to an end.

The body of the unknown soldier flown back from France has been lying in state in King’s Hall in the old Parliament House in Canberra since Sunday.

It was exhumed from a grave in Belgium or France and was one of 18,000 Australians buried in unnamed graves in the two countries. Nothing is known about him, not his name, his age, his rank, his battalion or where in Australia he was from.

This morning the body in its coffin will be removed from King’s Hall, placed on a gun carriage and taken to Anzac Parade.

For the first 10 minutes of the procession, Uniting Church, Anglican and Roman Catholic churches across Australia will toll their bells. This has not happened since the end of World War II.