Exits from Darwin were sealed last night as the hunt intensified for a man who shot two Victorian police.

Darwin police believe they are close to catching the man wanted for shooting two Victorian police last month after the weekend capture of Australia’s most wanted criminal, Brendan James Abbott. 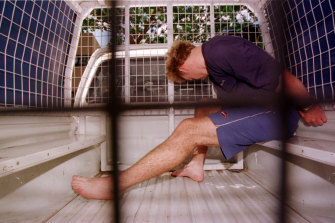 Brendon Berichon in custody after being captured in Darwin.Credit:Jason South

Berichon’s mother, Julie, yesterday called on her son to give himself up. “He has weapons and I’m afraid that he may just lose control and do something,” she said.

Commander Manison said Berichon was an armed drug user with a history of erratic behaviour.

Victorian police say Berichon shot and wounded two transit police near Box Hill station on 20 April before abducting a woman and forcing her to drive to Carlton.

Exits from Darwin remained sealed by police roadblocks last night, while taxis, buses, hotels and airline companies have been told to look out for Berichon.

Abbott was arrested on Saturday afternoon after six months on the run from a Brisbane prison.

He will appear before the Darwin Magistrates Court at 10am tomorrow where Queensland Police will seek his extradition. Western Australian police are also travelling to Darwin to question him about an armed robbery before Christmas.

Abbott made no attempt to resist arrest when he was recaptured by seven armed police at 5.10pm on Saturday. Police had seen him enter a room at the inner-city Top End Hotel, owned by the media identity Mike Willesee, half an hour earlier.

“He was very passive, he obeyed all directions, he gave his name… and he was totally cooperative,” Commander Manison said.

He said Abbott was in a state of shock and he “certainly wasn’t expecting to be apprehended in Darwin”.

Police later raided a room at the hotel in search of Berichon, but the room was empty.

Abbott arrived in the NT from Queensland on Friday in a Toyota LandCruiser believed to have been stolen in WA a year ago and hidden to throw police off the track.

The car contained $22,000 in cash, a revolver, a large amount of high-powered ammunition, four wigs, some make-up and a small quantity of marijuana.

It was fitted with radios and scanners to monitor police frequencies. Police also seized a laptop computer with software to counterfeit Queensland drivers’ licences, and about 100 blank Queensland licences. Abbott was carrying a loaded semi-automatic pistol.

In a statement issued last night by his solicitor, Mr Chris Nyst, Abbott claimed he was being made a political scapegoat. “I’ll cop what’s coming to me,” he said.

“They had me in solitary for 18 months last time. I just hope that they don’t go over the top this time.”

Brendon Berichon was arrested in Darwin on May 5, 1998. He was later extradited to Victoria charged with the attempted murder of two police officers and for holding a woman hostage while on the run with Abbott. He was found guilty and served nine years in prison.