GERMANY is storing Covid victims’ bodies in shipping containers as the country faces lockdown till Easter as its death toll spirals.

There are fears its new lockdown could last till Easter after the country's coronavirus death tally soared by nearly 1,000 in a single day.

Metal cooling containers have been placed at a cemetery in Hanau because overstretched hospital mortuaries are already full, say officials.

The containers, which have space for 25 bodies, are used to store bodies for a short time after Covid patients die, says Alexandra Kinski, head of cemeteries and crematoriums in Hanau.

The city, near Germany’s financial hub of Frankfurt, "has changed so much that we now need to make use of containers", she added.

The spokeswoman said: “If a person passes away and there is no space in the clinic then they come here and stay for a short while until the deceased is taken to a final resting place, for example here in the cemetery."

Germany was praised for its handling of the first wave of the coronavirus pandemic in the spring.

But it entered a strict lockdown on Wednesday as infections and deaths soar in a second wave.

The number of deaths now sits at 24,938 after a further 813 were recorded, says Germany's Robert Koch Institute, the country’s disease control centre.

And a record number of deaths was reported on Tuesday, with 910 new fatalities, according to Johns Hopkins University.

The country's Covid tally rose by 33,777 confirmed cases, bringing the total to 1.4million. 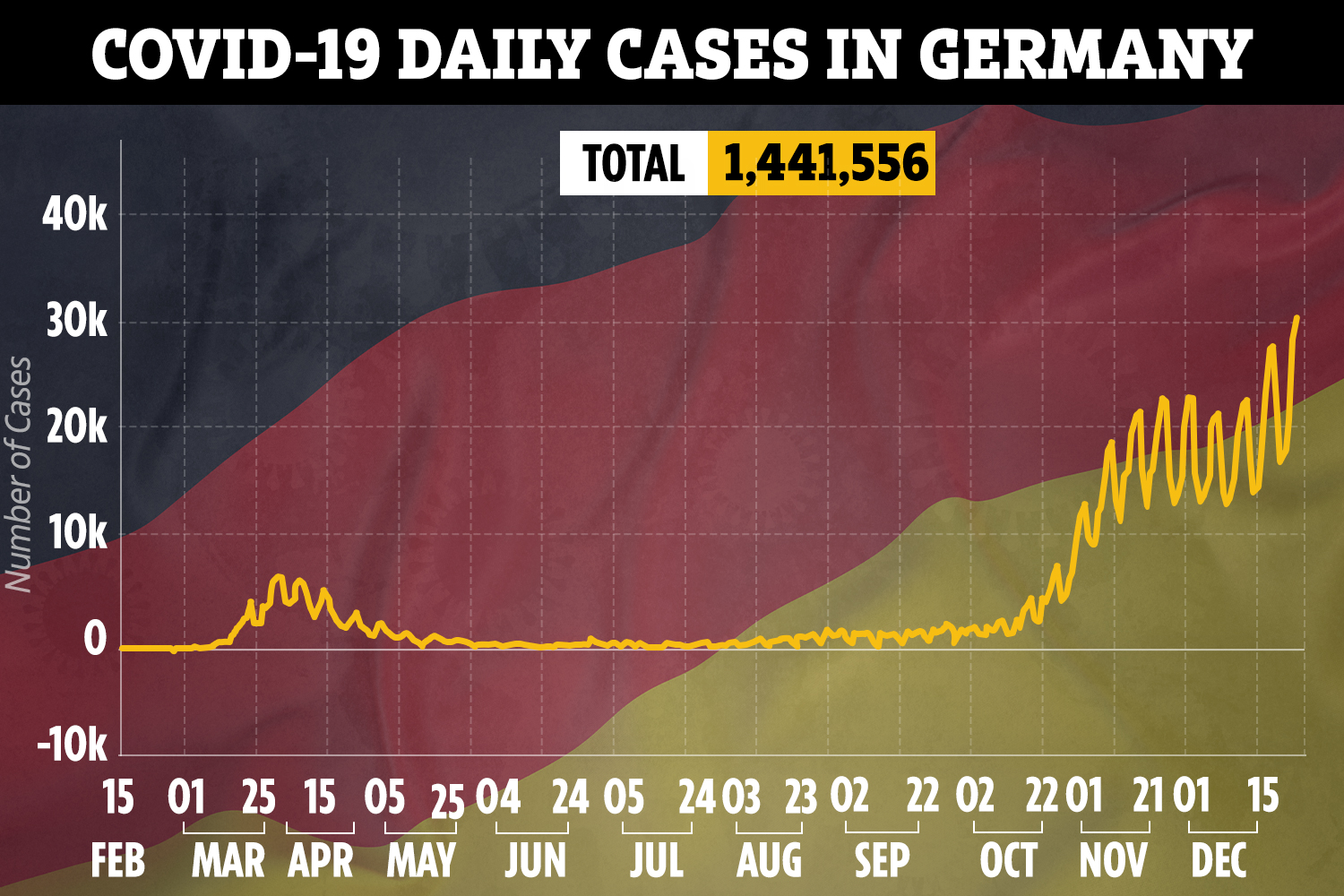 Worries are mounting that hospitals will fail to cope.

The Times reported that increasing Covid cases and fatalities have prompted speculation that lockdown could last until Easter.

A regional boss warned hospitals are "seriously on the brink of overload".

With Germany reporting a record level of coronavirus deaths as it entered a harder lockdown, shops and schools were shut to try to bring down stubbornly high new daily infections.

The country recorded 179.8 virus infections per 100,000 residents over the last seven days.

“It’s as if the virus wanted to remind us how important what we’re now doing is,” Health Minister Jens Spahn said of the surge.

Germany had brought in a “lockdown light” at the start of November, which closed bars and restaurants but left shops open.

Private gatherings are now limited to two households with a maximum of five people.

“I don’t know what these politicians want to do – they left it all open for too long, and now all of a sudden we had to quickly buy everything in two days.

"We people don’t know what they are doing anymore.”

Retiree Hans-Joachim Pauer, 71, said: "This is certainly harmful to the economy, but what alternative do we have?”

In Saxony, where the virus is spreading most rapidly in Germany, hospitals are also filling up.

The state’s governor said more drastic restrictions might be necessary, calling it “pure poison” when too many people were still going out and about.

Germany will roll out the Pfizer-BioNTech vaccine against Covid on December 27, with priority given to the elderly in care homes, Berlin city government said on Wednesday.

As a member of the European Union, Germany must wait for the European Medicines Agency (EMA) to approve the jab.

It is expected to make an announcement on December 21.

There's been frustration at the lack of approval of a vaccine which was partly developed in Germany – especially as countries such as Britain and the US are rolling it out.