Mitch McConnell appears to concede, saying there will be an orderly transition to ‘the next administration’ – as Lindsey Graham leads Republican senators in fist-bumping and congratulating Kamala Harris on Senate floor 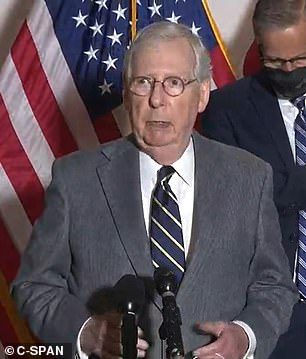 Mitch McConnell appeared to finally accept Joe Biden as president-elect on Tuesday as he promised that the US will have an ‘orderly’ transfer of power in January.

The Senate majority leader made the perceived concession after being asked by a reporter about why the General Services Administration hasn’t launched an official transition process.

McConnell (R – Kentucky) said the GSA is waiting for legal disputes surrounding the election – which have been filed by Donald Trump’s campaign – to be settled in court, before indicating that he doesn’t expect those disputes to swing the race in the incumbent’s favor.

‘We’re going to have an orderly transfer from this administration to the next one,’ he said. ‘All of this will happen right on time and we’ll swear in the next administration on January 20.’

‘What we all say about it is, frankly, irrelevant,’ he added.

McConnell’s comments came after Vice President-elect Kamala Harris was greeted on the Senate floor with fist-bumps and congratulations by some of the same Republicans who have publicly denied she and Biden won the election.

Reporters on Capitol Hill, along with C-SPAN’s cameras, captured Sen. Lindsey Graham, a South Carolina Republican and top ally to Trump, giving Harris, a senator from California, a fist-bump. 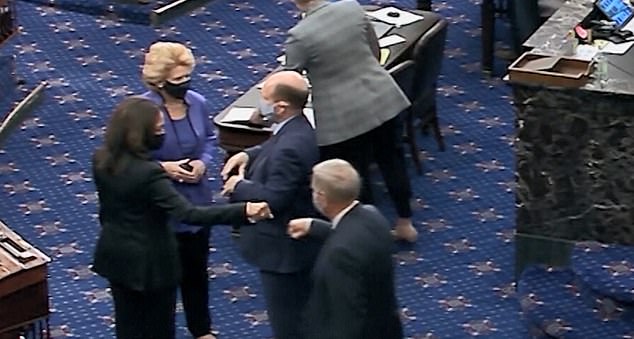 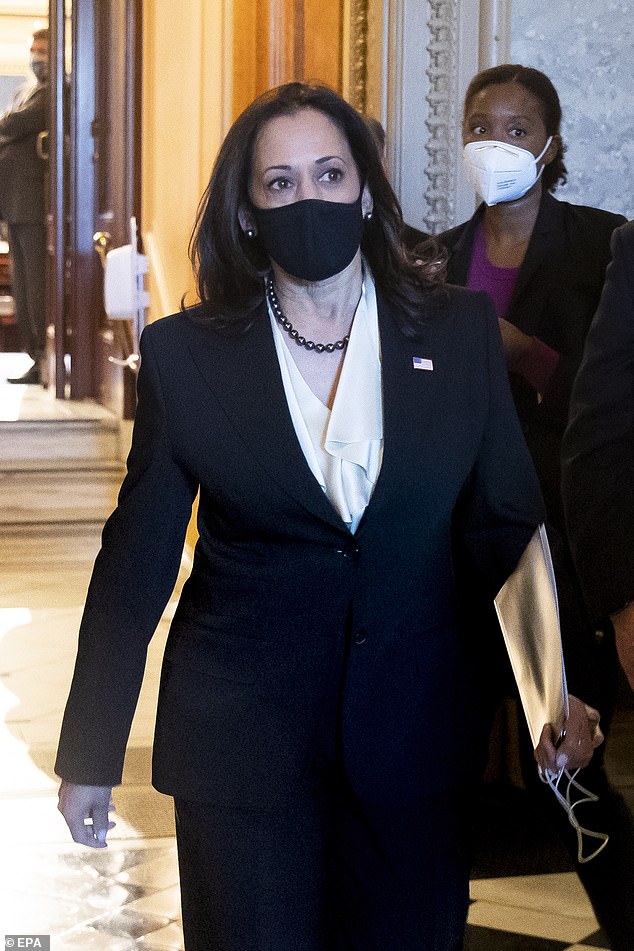 Vice President-elect Kamala Harris returned to Capitol Hill Tuesday to vote – and was greeted by several GOP colleagues who wished her congratulations, despite Trump’s refusal to concede the election

The election was called 10 days ago by the major news networks for Biden and Harris, yet Trump has refused to concede.

He’s stayed out of sight publicly, appearing briefly in the White House Rose Garden Friday, and driving to his Virginia golf club Saturday and Sunday.

On Monday, Trump continued to contend that he ‘won’ the election as the official in charge of greenlighting the transition for Biden has refused to do so.

Meanwhile, Trump’s GOP allies on Capitol Hill have given the president cover to challenge the election though legal means, cases he continues to lose.

Speaking to CNN after he wished Harris congratulations, Lankford, a Republican from Oklahoma, said he was just being polite.

‘The election is not settled,’ Lankford said. ‘So if you are trying to catch it and spin it however you want to – if someone walks right up to you, you say, “Hello, congratulations.”‘ 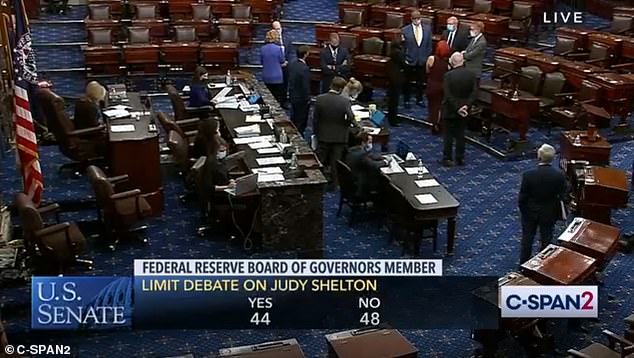 Lankford also said last week that he was okay with Biden starting to receive intelligence briefings and that he’d ‘step in’ if the briefings didn’t happen, but then he walked back that statement when appearing on the more conservative Newsmax TV.

‘I’m not in a hurry, necessarily, to get Joe Biden these briefings,’ Lankford said over the weekend. ‘It’s been interesting how the media, the national media – not this network, but others – have twisted this term “step in.” I happen to chair the committee that oversees GSA. That is the entity that has to be able to make this call.’

Later, he edited his comments again.

‘I did step in. I did talk to them on Friday,’ Lankford said on CNN.

Graham’s fist-bump with Harris was also notable as the South Carolina Republican has come under fire for a call he made to Georgia’s Republican secretary of state.

Georgia Secretary of State Brad Raffensperger told The Washington Post Monday that he was unnerved by a call he received from Graham Friday.

The senator had asked Raffensperger if he was able to toss out every mail-in ballot from Georgia counties where there was a higher rate of non-matching signatures from voters.

Trump is behind Biden in Georgia, a previously red state, by a narrow margin, with a hand recount expected to wrap up Wednesday.

Graham has denied he pressured Raffensperger to toss out ballots.