A far-right attack on anti-fascists in Perama comes on the heels of a surge in violence targeting migrants and others. 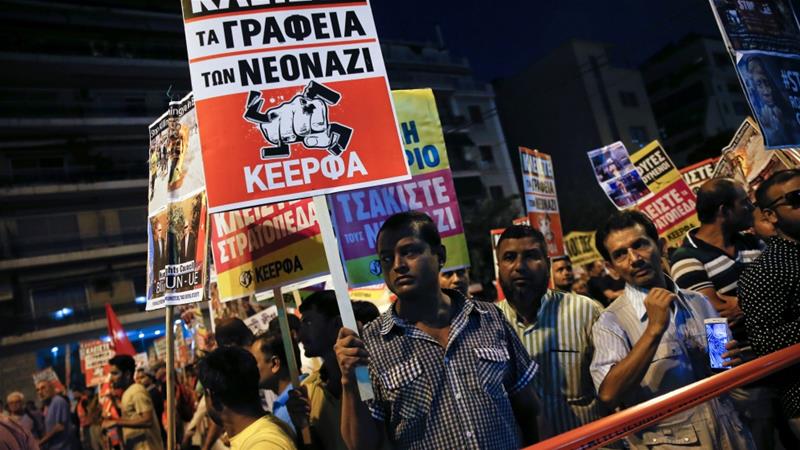 Athens, Greece – A spate of far-right attacks targeting refugees, migrants, anti-fascists and others has aroused concern in Greece.

On Saturday, the anti-fascist group ORMA said that affiliates of the neo-fascist Golden Dawn party attacked them in Perama, an impoverished suburb of Piraeus.

The attack comes amid surging violence, including a brutal attack against the mayor of Greece’s second largest city, Thessaloniki.

“We were attacked by Golden Dawn members with crowbars outside of the offices of Saint Nicholas Union,” ORMA wrote on Facebook, referring to a ship worker union linked to the far-right party.

The post added that the anti-fascists pushed back the attackers. When they went to a police station to file a complaint, ORMA members were arrested, the group said.

In response to the incident, Syriza, the ruling left-wing party, said in a statement that the “poisons of fascism and racism have no place in Perama or anywhere” else.

On its website, Golden Dawn, which currently has 16 seats in the Greek parliament, dismissed the allegations as “ridiculous”.

Javed Aslam, president of the Union of Immigrant Workers, explained that two men attacked the workers in front of “dozens of Greeks and others”.

“They were just working, and some people came and [attacked] them,” Aslam told Al Jazeera by telephone.

“Five people beat them … this is happening during Ramadan,” he said, referring to the Muslim holy month.

In a statement responding to the attacks, Keerfa, an Athens-based anti-fascist group, has called for a demonstration on Wednesday to “stop the fascist threat”, which constitutes an attack on “all of our freedoms”.

On May 19, a group of ultra-nationalist demonstrators pounced on Yiannis Boutaris, the 75-year-old mayor of Thessaloniki, during a flag-lowering ceremony commemorating the killing of Pontic Greeks during World War I.

The assailants kicked Boutaris and hurled bottles at him until he was able to make it to his vehicle and escape from the scene.

Police have arrested at least 12 suspects in relation to that attack, according to the Greek daily Ekathimerini.

In early May, some headstones were smashed in a Jewish cemetery in Athens. Although no one took credit for the vandalism, neo-Nazi groups have claimed credit for similar incidents in the past.

The uptick in far-right violence comes on the heels of a massive increase in hate crimes in 2017, when the number of incidents targeting victims based on their nationality, ethnicity or skin colour nearly tripled, according to police statistics provided to Al Jazeera earlier this year.

Yonous Muhammadi, an Afghan refugee and head of the Athens-based Greek Forum of Refugees, was attacked by Golden Dawn in the past.

“Again, I see that [far-right violence] is getting worse,” he told Al Jazeera.

“Next year we have elections, and [it seems] the far right is taking advantage of this situation.”

In September 2013, police arrested Golden Dawn’s leading cadre after a party member stabbed to death Pavlos Fyssas, an anti-fascist rapper, in the Keratsini area of Piraeus.

Following that attack, 69 Golden Dawn members were put on trial for allegedly operating a criminal organisation.

That trial is slated to end later this year, but has moved slowly.