Greece is increasing border guards along its border with Turkey in anticipation of a spike in illegal immigration brought on by the chaos in Afghanistan, officials said Monday.

In the comings months, some 250 officers will join the 1,500-strong border force and an additional 800 extra border guard personnel will also be hired to staff airports and regions close to the Greece-Turkey border. 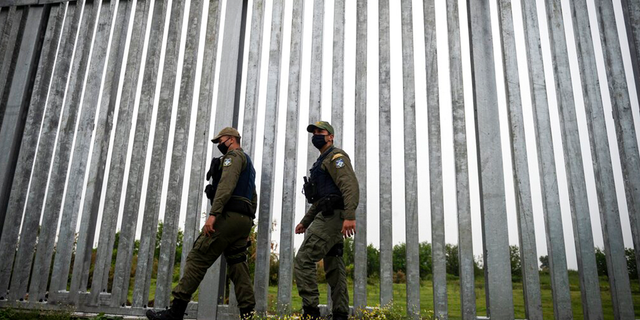 FILE: Police officers patrol alongside a steel wall at Evros river, near the village of Poros, at the Greek-Turkish border, Greece.
(AP)

Greece has toughened its migration policy and border policing over the last two years, extending a wall along its land border with Turkey and installing a high-tech surveillance network to try to deter asylum-seekers from making the crossing.

The recent increase in personnel was spurred in part by the Taliban takeover in Afghanistan, authorities said.

Greece has also denied mounting allegations from human rights groups that migrants caught after crossing into Greece are being deported without being allowed to claim asylum.

Poland and Lithuania in recent months have been struggling to cope with a surge in migration, mostly from Iraq and Afghanistan, arriving at their borders with Belarus. They accuse Belarus’ government of encouraging the flow of migrants to exert pressure on the entire EU.

Greece, Poland, and Lithuania were among 12 countries that sent a letter to the European Commission last week to call for more extensive EU measures against illegal immigration.