The latest bloody massacre in Ethiopia has seen gunmen slaughter more than 100 civilians before the military took revenge by killing 42 armed militants.

Wednesday’s horrific attack occurred in the country’s western village of Bekoji in the Metekel zone of Benishangul-Gumuz, an area where multiple ethnic groups are living.

The Ethiopian Human Rights Commission (EHRC), a government-affiliated but independent body, said that ‘more than 100 people have been killed in fires and shooting perpetrated by armed men’. 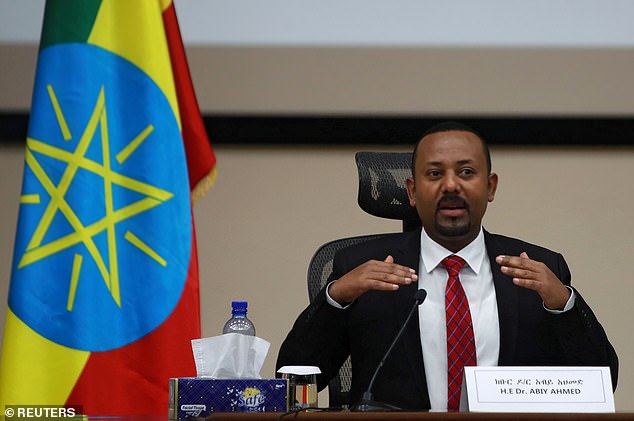 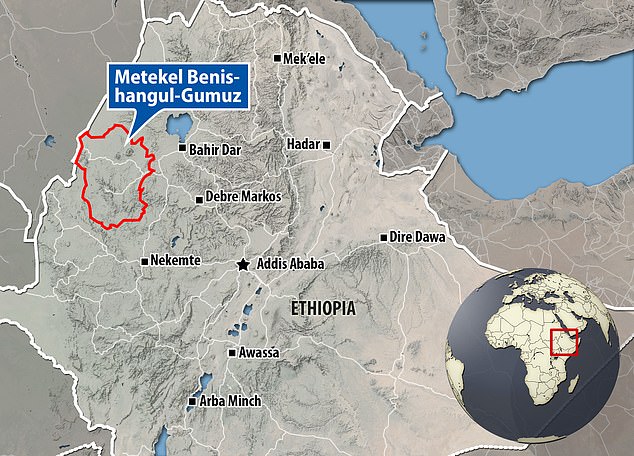 The commission said survivors had ‘disturbing photo evidence’ of the attack on sleeping residents, which began in the early hours of Wednesday and continued until afternoon.

The military responded by killing 42 armed men who took part in the massacre, state-affiliated Fana TV reported on Thursday.

Soldiers seized bows and arrows and other weapons from the men who were involved in the dawn attack.

Ethnic violence over land and resources has been a persistent problem in Ethiopia under Prime Minister Abiy Ahmed, often seen as a backlash to the Nobel Peace prize winner’s efforts to lead democratic reforms in Africa’s second-most populous nation.

Five officials were arrested on suspicion of playing a part in the trouble, the regional government said in a statement without giving further details of possible charges.

At least 36 survivors were being treated for bullet and arrow wounds in a hospital about 56 miles from where the attack occurred, the commission said.

‘In addition to the damage inflicted on people’s lives and bodies, crops have been set alight. One victim told us he saw 18 such fires,’ the statement said.

There were no security forces in the area at the time, the commission said. 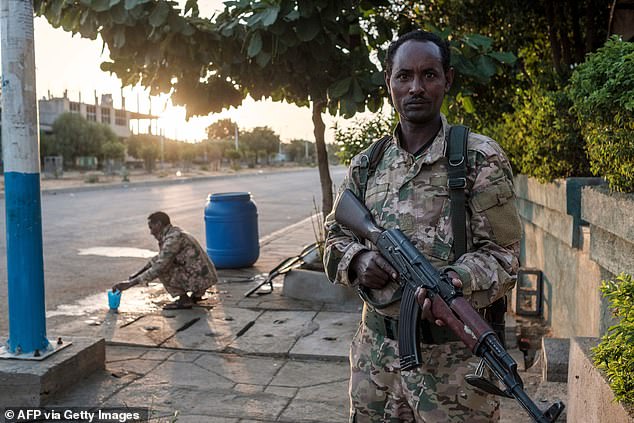 The region is home to ethnic Shinasha, Oromo and Amhara. Pictured: a member of the Amhara Special Forces holds his gun

Some of the victims said they knew their assailants, the commission said, adding that humanitarian aid should be sent to assist the displaced and wounded.

Belay Wajera, a farmer in the western town of Bulen, said he counted 82 dead bodies in a field near his home after Wednesday’s raid.

He and his family awoke to the sound of gunshots and ran out of their home as men shouted ‘catch them’, he said.

His wife and five of his children were shot dead, he was shot in the buttocks while four other children escaped and are now missing, Wajera told Reuters by phone late on Wednesday.

Another resident of the town, Hassen Yimama, said he counted 20 bodies in a different location. He grabbed his own weapon but assailants shot him in the stomach.

A local medic said he and colleagues treated 38 injured people, most suffering from gunshot wounds. Patients told him of relatives who were killed with knives and told him that gunmen set houses on fire and shot at people trying to escape, he said.

‘We weren’t prepared for this and we are out of medicine,’ a nurse at the same facility said, adding that a five-year-old child died while being transferred to the clinic. 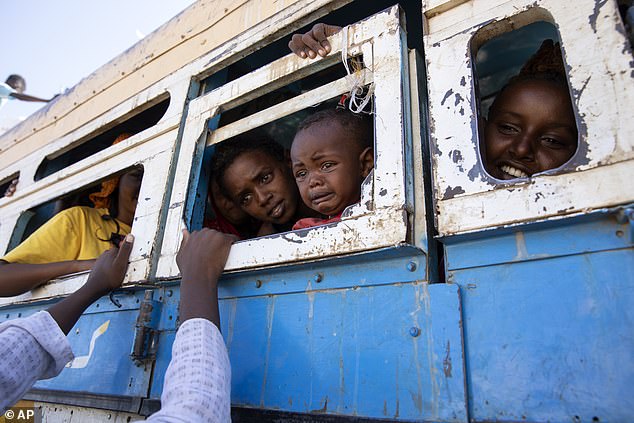 There is no known link between the violence in Benishangul-Gumuz and military operations in northern Tigray region. Pictured: refugees fleeing conflict in Tigray

The region is home to ethnic Shinasha, Oromo and Amhara, the commission said, the latter two the largest and second largest ethnic minorities, respectively, in Ethiopia.

Some Amhara leaders have asserted ownership of the Metekel zone – claims that have inflamed tensions with ethnic Gumuz in the area.

‘In previous attacks it was people who came from ‘the forest’ who were involved but, in this case, victims said they knew the people involved in the attack,’ the rights commission said in its statement.

Abiy visited the Metekel zone on Tuesday and met residents at a town-hall style meeting, posting on Twitter: ‘The desire by enemies to divide Ethiopia along ethnic & religious lines still exists.’

Western Ethiopia has suffered a spate of horrific attacks in recent months.

At least 34 people were slaughtered in an attack on a bus in the same Metekel zone in November.

Twelve others were killed in a separate attack in the zone in October, and 15 died in a similar assault in late September.

In October, Abiy told lawmakers that fighters responsible for those killings were receiving training and shelter in neighbouring Sudan and that Khartoum’s assistance was needed to stabilise the area.

Opposition politicians – notably from the Amhara ethnic group – have sounded the alarm about what they say is a targeted campaign by ethnic Gumuz militias against ethnic Amhara and Agew living in Metekel.

They claimed at the time that more than 150 civilians had been killed in the attacks, figures that could not be independently verified.

There is no known link between the violence in Benishangul-Gumuz and military operations in northern Tigray region, which have killed thousands, according to the International Crisis Group think tank, and sent more than 50,000 people fleeing over the border into Sudan.