London: Former Tory leader and British foreign secretary William Hague says the UK should unite with its Five Eyes partners Australia and the United States in banning Huawei from its 5G rollout.

Lord Hague joins a growing chorus of top-tier Tories, including the former Defence Secretary Michael Fallon, who want the government to change course in line with the Australian and US position. 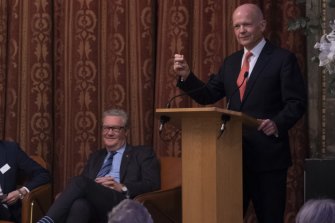 It remains unclear when the British government, which is in the throes of the Tory leadership campaign, will announce whether or not it will allow the Chinese supplier to be involved.

A preliminary decision, taken by the National Security Council which was split on the issue, advocated a limited Huawei role. But the decision, which was sensationally leaked, has sparked a fierce backlash within the Conservative party, with key MPs now urging the decision be left to Theresa May's successor – likely to be the former London mayor and foreign secretary Boris Johnson.

The former foreign secretary told an audience at Australia House on Wednesday night that Britain should join Australia and the United States in banning the Chinese supplier, to ensure unity amongst the Five Eyes intelligence sharing network.

"It's of crucial importance – the Five Eyes relationship – more than people will ever know, let's put it that way," Lord Hague told the Britain Australia Society.

"It is one reason we have to have a common approach so we don't disrupt things and one reason I have advocated that the UK takes a similar line with the United States and Australia on Huawei is to maintain that unity of the Western alliance," he said.

Under Chinese law, the communist government can order companies to share data with its intelligence services. Huawei says it would refuse such a request.

Lord Hague said while there had been no evidence that Huawei had spied on behalf of Beijing, it would be unwise for the West to rely on technologies that China could use to control rather than liberate its peoples.

"It is not that we have actually found that Huawei is spying on us somehow," he said.

"It is that can you let yourselves be dependent and unable to maintain a vital infrastructure in a country and be dependent on a different system that has a different idea of freedom and technology."

Behind the scenes, Australia has been urging Britain to join it in banning Huawei from the 5G rollout. A government review was handed down more than a month ago but there is no indication when the government will make its decision.

Key backers of Boris Johnson now want the decision left to the new prime minister, likely to be announced in the week of July 22, frustrating the nation’s mobile phone companies who are urging the government to make clear its determination.

Lord Hague's comments came after the culture secretary Jeremy Wright, whose job it is to announce the government's final decision, said a recent US decision to place Huawei on the entity list could be the overriding factor in the decision.

"What has changed recently is that the US has made some decisions on entity listing for example that makes a difference because this is a hugely interconnected world," Mr Wright told Politico.

"So if Huawei equipment has a large number of American components in it, and the Americans decide to choke off the supply that is going to have an influence on whether we think Huawei equipment is good to use or not, regardless of any security concerns."

On the timing of the decision, Mr Wright said: "I'm much more interested in getting the decision right than getting it out early."