Verdicts are linked to botched Israeli undercover operation in Gaza last month in which seven Palestinians were killed. 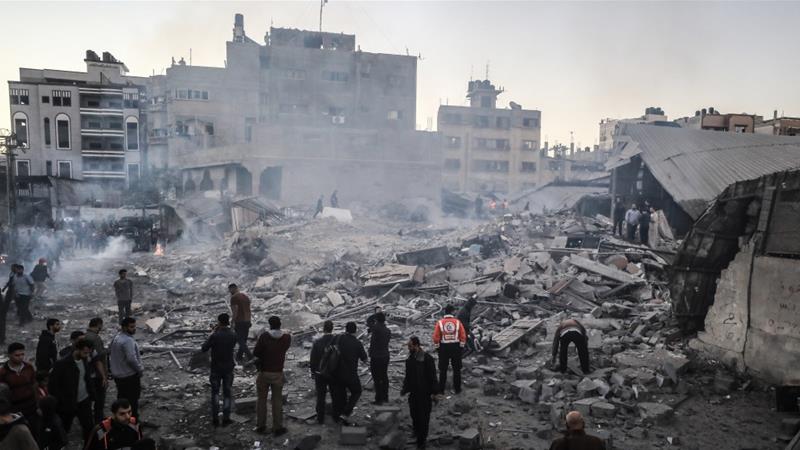 A military court in the Gaza Strip has sentenced six Palestinians to death for allegedly collaborating with Israel.

The court sentenced eight other defendants to prison for various periods in addition to hard labour.

Iyad al-Bazm, the spokesperson for Gaza’s Interior Ministry said that of those eight, four – including a woman – were sentenced to jail terms ranging from six to 10 years.

“The court also gave [the other] four people a 15-year jail term each for collaboration with hostile parties,” he told a press conference held in Gaza City.

“The verdicts are a clear message to spies of the [Israeli] occupation,” al-Bazm said.

The verdicts were delivered three weeks after seven Palestinians and one Israeli officer were killed when an alleged Israeli army cell in Gaza was uncovered on November 11, leading to a vicious battle.

The Israeli unit escaped from Gaza under cover of Israeli air raids on the strip, a coastal enclave that has been ruled by the Hamas movement since 2007.

The group’s armed wing fired hundreds of rockets at Israel in response, with Israeli forces attacking dozens of targets in Gaza before a November 13 ceasefire agreement.

The botched undercover raid has led to a crackdown on suspected collaborators by Hamas, the group said.

“We tell all collaborators to make their own calculations and turn themselves in because sooner or later we will get to them. Our job is to protect the forces of the resistance, and it’s an important task for us,” the group said in a statement.

Hamas had previously published photos of eight alleged Israeli undercover agents but did not identify them.

According to an interview with the British Independent, Hamas spokesperson Hazem Qassem said the members of the Israeli unit were posing as NGO workers and had used fake Palestinian identity cards based on eight unsuspecting Gaza residents.

The IDs were found in the wreckage of the destroyed military vehicle the Israelis left behind.

“They had detailed but fake ID cards of Gaza residents which were found [in the wreckage],” Qassem told the Independent.

“Those who the Israelis were posing as were detained but they had no idea their names had been used,” he added.

Israeli daily Haaretz reported that according to an anonymous Hamas official, the Israeli agents were stopped at a checkpoint in the southern strip and claimed they were returning patients back to their homes.

Qassem said that after questioning the undercover agents at the checkpoint, Palestinian security personnel suspected them “because of their accents” that didn’t match the area they claimed to come from.

The Israeli team then reportedly opened fire after senior Hamas officers were summoned to the scene, which resulted in the killing of a Hamas commander and his deputy.

Hamas has executed 28 Palestinians, the majority on charges of aiding Israel, since 2007.

Such suspects always face trial behind closed doors, while the media is usually prevented from covering the proceedings.

“Rushing to sentence people to death smacks of militia rule, not the rule of law,” said Omar Shakir, the Human Rights Watch director for Israel and the Palestinian territories.

“The death penalty is a barbaric practice and always wrong, no matter the circumstance,” he told AFP.

It was not clear when the executions of those in custody would take place.