Harry POT head: Bespectacled drug-dealer is ridiculed for his likeness to JK Rowling’s boy wizard… as he’s sent off to spend three years in Azkaban

A drug dealer who was jailed for running a county lines drug gang has been mocked online after his mug shot revealed his bizarre likeness to Harry Potter.

Tom Hayes, 23, was sentenced to three years behind bars after he admitted to being part of a gang that flooded Norwich with heroin and cocaine.

But his mugshot – featuring retro jam jar glasses and displaying a mop of jet black hair – saw him become the butt of social media users’ jokes as they compared him to the fictional wizard when his sentence was reported online.

Bespectacled Hayes was taunted by readers, who dubbed him ‘Harry Pothead’. 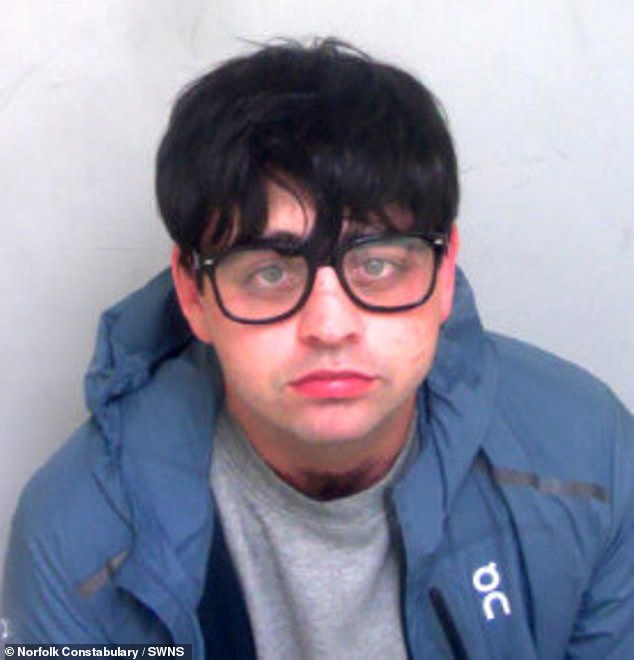 Harry ‘Pothead’: Tom Hayes, 23, (pictured) was sentenced to three years behind bars after he admitted to being being a gang that flooded Norwich with heroin and cocaine

Hayes, from Huyton in Merseyside, became involved in running the network just eight days after being released from prison for other drug supply offences, the court heard.

He ran the ‘Scouse Macca’ route which ferried heroin and cocaine from the north west of England.

He was jailed yesterday having previously admitted two counts of being concerned in supplying controlled drugs of class A.

James Lachkovic, mitigating, said Hayes ‘had no option’ but to get involved after he received a knock at his front door from gangsters who said his debt had gone up.

He accepted as the operator but not controller of the line he had awareness of the scale of the operation.

But he insisted Hayes ‘had no influence’ on those above him in the chain and had performed his duties under direction.

Jailing Hayes for a total of three years and three months, Recorder Sarah Fraser Butlin said the defendant had played a ‘significant role’ in the conspiracy.