London: Prince Harry’s late grandmother, Queen Elizabeth II, once famously told her children the royal family had to be seen to be believed.

But in the past month, it appears most Britons have seen enough of the 38-year-old Duke of Sussex and don’t quite believe him either. 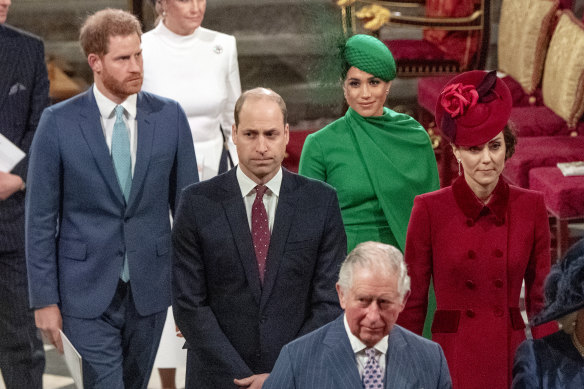 Prince Harry, Prince William, Meghan and Catherine with Charles – then the Prince of Wales – in 2020.Credit:Getty Images

Amid an almost unprecedented build-up to the estranged British royal’s already record-breaking memoir Spare, Harry said he simply wanted to share his story with the world. But just one in five Britons (21 per cent) believe him, a poll by YouGov found this week.

Around twice as many (41 per cent) believe his antics are simply to make money. About 18 per cent thought the main aim of his media onslaught was to damage the institution.

Prince Harry’s best-selling, controversial and thoroughly rollicking memoir lifted the lid on life as a royal perhaps like nothing ever before.

He divulged that he had begged his father, now the King, not to marry his second wife Camilla, now the Queen Consort, and also delivered numerous other revelations, including that his elder brother and heir to the throne, William, had knocked him over during a heated argument.

If Harry had hoped the revelations would also generate greater sympathy for him among the public, he was mistaken. Just 26 per cent of Britons have a positive view of him, the lowest level since the company started tracking opinions of him in 2011.

Even younger Britons, who generally tended to hold favourable views of Harry, are now divided, with 41 per cent having a positive impression and 41 per cent a negative one.

The royal soap opera fought out on the front pages of the press has clearly had an impact on perceptions of the monarchy: the number of people who say they were embarrassed by the monarchy has risen from 15 per cent to 21 per cent since September.

Ed Owens, a historian and honorary associate researcher at London University’s Centre for Modern Monarchy, said this week it had faced crises more serious than the current one.

“The ‘War of the Wales’ – which pitted Charles and Diana against each other – during the 1990s did far more damage to the Crown’s reputation,” he said of a series of damaging revelations at the time of their divorce. “And the 1936 abdication completely undermined the institution. In this case, an enormously popular king like Edward VIII was replaced by an unknown like his younger brother, George VI.”

But he said Harry’s comments on the Netflix Harry & Meghan six-part documentary, in his book Spare and promotional TV campaign do threaten to overshadow his father’s coronation in May if the couple continue to receive such media attention.

“The royal family must trust that media interest in Harry will subside, and that there will be no more allegations or revelations that do even more damage to the Crown.”

Harry’s book reveals he’s deeply aware of the family’s historical pressure points, and among the early pages he suggests his late grandmother even took something of a final swipe at her uncle and his American socialite wife, Wallis Simpson, by exiling them in the Royal Burial Ground “away from everyone else”.

Edward VIII set off a life-changing chain of events when as his king he “renounced the crown for love”. Harry suggests in the opening pages of his memoir that his grandmother decided to bury the couple in a distant spot as a last scolding.

Recalling a moment when he found himself alone in the royal cemetery at Frogmore, Harry describes the site as the “final resting place for so many of us including … the controversial Wallis Simpson. As well as her double controversial husband Edward, who was king and my great-great uncle.

“After giving up the throne for Wallis and leaving Britain with her, the two began to worry about their eventual return and became obsessed with being buried [in the Royal Burial Ground].

But Harry is not the first to give damaging public interviews or make damaging revelations. The then Prince and Princess of Wales, that is Charles and Diana, both gave televised interviews around the time of their divorce that sent shockwaves through Britain.

And indeed the exiled Duke and Duchess of Windsor, Edward VIII and Wallis Simpson, released their own memoirs in 1951 and 1956, respectively. A King’s Story charted Edward’s early years and his military service during World War I before he ascended the throne on the death of his father George V, in 1936. And indeed it documented his “lonely” stint as king and his decision to marry against the establishment.

“And if the institution is so weak that it can’t stand a ghostwritten book by a junior member, then it’s probably not worth keeping it,” he told The Mirror.

“I mean, quite frankly, a book written by [a monarch], a future queen, Diana, and a book by the future King Charles are far more relevant and important than a book by, what is he now [but] sixth in line to the throne who will be rapidly going down the hierarchy.”

He said the Duke had “every right” to write a memoir and it would not be the last.

Morton’s past, working with Diana, was featured in the latest season of Netflix’s scripted royal drama The Crown. When the explosive biography was published in 1992, she denied working with him, but after her death, he revealed how he sent her questions and she secretly recorded her answers, sending the cassette tapes back to Morton via a friend. 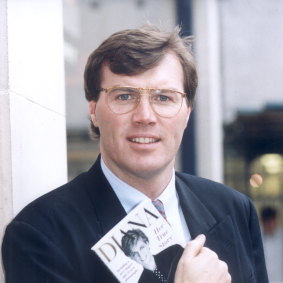 Andrew Morton, biographer of Diana, Princess of Wales, holding his book Diana: Her True Story in 1997.

“It goes back to Edward VIII… which was an international bestseller like this one’s going to be. And it upset the royal family,” Morton said.

Spare itself has become the fastest-selling non-fiction book in history, publisher Penguin Random House says, reporting more than 1.4 million copies sold on Tuesday, the first day it went on sale.

On Britain’s ITV, Harry: The Interview was watched by an average audience of 4.1 million viewers, although the second episode of BBC’s hugely popular drama Happy Valley emerged ahead with an average of 5.3 million viewers.

And talkback radio programs across Britain and the Commonwealth devoted countless hours and listener calls to the subject.

Andrew Marr, a former BBC political editor and now broadcaster on London radio LBC, suggested “the monarchy itself is now in play”. He said if Harry was genuine in saying he still supported the monarchy, he seemed “deluded”.

“He claims still to be a supporter of the monarchy, 100 per cent, and doesn’t think, apparently, he’s damaging the royal family itself,” Marr said. “Oh, yes, he is. He’s painting the rest of the royals as cold, manipulative, cowardly because they hide behind media leaks, and deeply messed up.

“If he’s right, I’d rather do without them. If he’s wrong, then this is the most disgraceful, petulant and damaging smear of all time.”

Marr said while the royals have been able to pretend it was “tittle-tattle” or just look away as in the past, the Netflix documentary, the tell-almost-all book, and the devastating broadcast interviews could not go unanswered.

“Carrying on and saying nothing – stiff upper lip, never apologise, never explain – now looks like denial. It will suggest to me, and many more, that Harry’s right,” Marr said.

Royal biographer Angela Levin, who has been among the fiercest critics of Harry and his wife Meghan since they quit as working members of the family in 2020, said the institution needed to consider the damage it has suffered in the past month.

“There’s always a chance that the monarchy can fall,” she said.

“Prince Phillip was very good about that – he used to say that you can’t just sit here and wait for things to happen. ‘We have to go out and prove to people that we are there for them and that we’re working for them’.”