Senator Payne said Putin was being targeted because he was “personally responsible for the deaths and the suffering of innocent Ukrainians”. 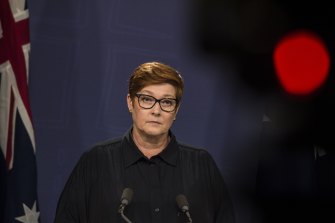 “We have seen overnight announcements by the UK, the EU and this morning by Canada that they will sanction Vladimir Putin himself and Russia’s Foreign Minister Sergey Lavrov given the gravity of what they are doing and their key roles,” Senator Payne said on Saturday.

“There is determination to ensure that Russia faces a high cost for what is an unprovoked and unjustified attack on its neighbour.”

Senator Payne said the expulsion of Canberra-based Russian diplomats was a live option.

“(However) it is not something that we are considering currently,” she said. “It enables us to have a direct line of communication with the Russian government. We did call in the ambassador to meet with the secretary of the Department of Foreign Affairs and Trade to make absolutely clear our views.

“Last night Minister Birmingham as acting Foreign Minister signed the necessary instruments to put financial sanctions on eight Russian oligarchs who are close to President Putin and who deserve to bear the economic punishment and cost for Russia’s destructive behaviour.

“[There will also be] sanctions on 339 members of the Russian Duma who are the political facilitators of this action. We will today take steps to sanction key figures in the Belarusian government allied with Russia who are abetting the invasion.”

Ms Payne said the next immediate priority was to continue sanctions on Vladimir Putin’s inner circle and on Russia’s defence industry.

“[Putin] will be personally responsible for the deaths and suffering on innocent Ukrainians. He has lied, he has deceived, fabricated and he has shown no interest in genuine dialogue.

“It is clear that the only way to exact a cost for those actions is to ensure that he himself shares some of that cost and some of the pain that he is inflicting on everyone else around him in Ukraine.”

She said Australia was also looking to support Ukraine and its people and also contributed cyber assistance and non-lethal military equipment through NATO.

“Australia has consistently condemned these actions and reiterate our calls to stop this violation and we seek the withdrawal of the Russian military and this military action.”