Heartbreaking moment dementia-hit mother, 85, breaks down in tears at window of her care home after being told her daughter can’t give her a hug due to Covid restrictions

This is the heartbreaking moment a dementia-hit mother breaks down in tears at the window of her care home after being told her daughter cannot give her a hug due to Covid-19 restrictions.

Footage shows Doreen Morris, 85, with a big smile on her face after spotting Tracy Gothard, 51, outside her nursing home in Bradford, West Yorkshire.

The great-great-grandmother asks Tracy to come inside and motions with her hands, to which her daughter replies: ‘I can’t come in, we’re not allowed yet because of that nasty bug’.

Tracy then asks her mother to ‘blow her a kiss’ but the pensioner instead breaks down in tears. 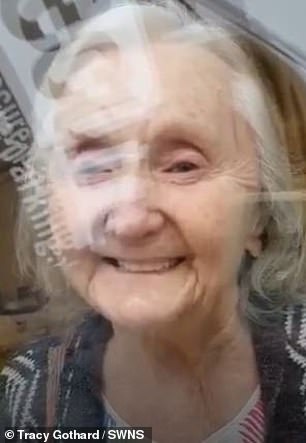 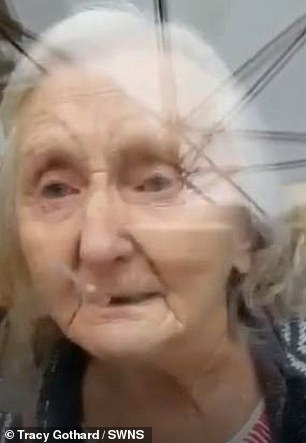 Footage shows Doreen Morris, 85, with a smile on her face (left) after spotting Tracy Gothard, 51, outside her care home, before she is told her daughter cannot come inside (right)

The window meeting between Tracy and Doreen, who has been at the home two years, was their first one since August, when Bradford was placed under tier three restrictions.

Mother-of-two Tracy said she has released the video in an attempt to try and change the ‘unhealthy’ rules around care home visits.

She added: ‘When my mum comes out she just wants to hug me and put her arms around me, and I want to do the same.

‘Because of her dementia she doesn’t understand why we can’t, which is what you can see in the video – she wants me to go inside.

‘It’s heartbreaking to see her react like that, I feel exactly the same as her as well, I want to go in and give her a cuddle.’

Tracy continued: ‘My mum had a life before all this, she would go out all the time, she would dance, see family and have a good time, now all that is gone.

‘She is like a prisoner in her own home.’

The 51-year-old filmed the clip outside Bierley Court Care Home on October 29. 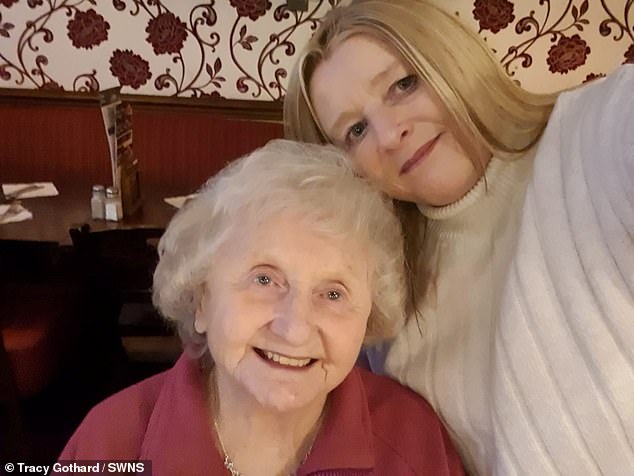 Doreen pictured above with her daughter Tracy, who said she has released the video in an attempt to try and change the ‘unhealthy’ rules around care home visits 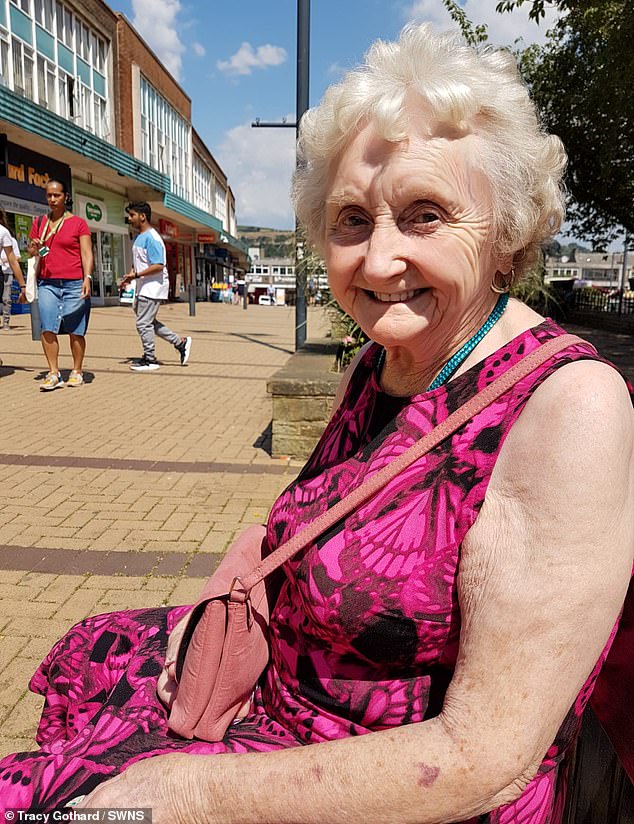 Tracy said of her mother (above): ‘She had a life before all this, she would go out all the time, she would dance, see family and have a good time, now all that is gone’

Tracy said she ‘loves’ the home itself and the staff there but there is a ‘problem with the system’.

She added: ‘I want to be able to go in to my mum’s home and show her that I haven’t forgotten about her, that I still love her.’

Her proposal is to have at least one family member tested for the virus and, if negative would then be permitted entry to the home to see their loved one.

Tracy said: ‘I think that is the best way around this, we need to start seeing our elderly people again one way or another.

‘If workers at these care homes can have a test then enter then I don’t see why I can’t too. I understand safety is paramount but we need to strike a balance at the same time.

‘My mum is deteriorating quickly, she’s very depressed and anxious over what’s going on, although she doesn’t fully understand why.’ 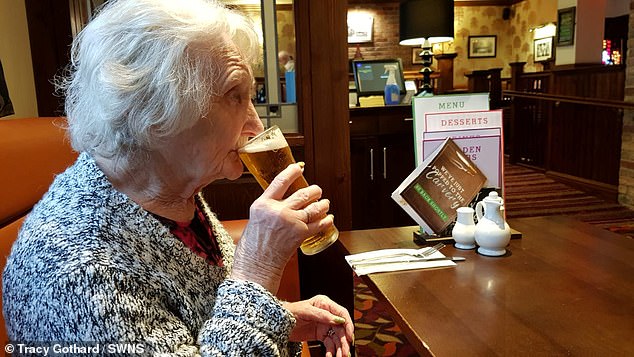 Tracy described her mother (pictured above) as a ‘fun-loving person’ and a ‘party animal’, adding: ‘She loves getting out and about and enjoying herself’

Tracy said she supports the Rights for Residents campaign, which is seeking to allow care home residents visits with their families.

She added that she initially shot the video to send to family so they could see Doreen, but decided to share it after seeing her mother’s response.

Tracy, who works in customer service for Yorkshire Water, said pre-Covid she would visit her mother, whose husband Danny died 10 years ago, every day.

Tracy said: ‘She’s such a fun-loving person, she loves to get up and have a dance, she’s a little party animal really.

‘She loves getting out and about and enjoying herself.’

After the first lockdown they were allowed garden visits but since August she has only been able to see Doreen from the car park of the care home and in video calls.

Tracy said: ‘We now face another lockdown so who knows when we will be able to see each other properly again.

‘Something needs to change.’

Care home visits must be OUTSIDE or through a window during England’s second coronavirus lockdown, Government says

Care home visits must take place outside or through a window or screen during England’s second coronavirus lockdown, the Government said on Wednesday.

‘Ad hoc’ in-person visits will not be allowed but homes will still be able to find alternative ways for relatives to meet up with residents.

During the first wave in the spring, visits had to be banned completely because the virus was ravaging the care sector and officials feared they could not be safely organised. 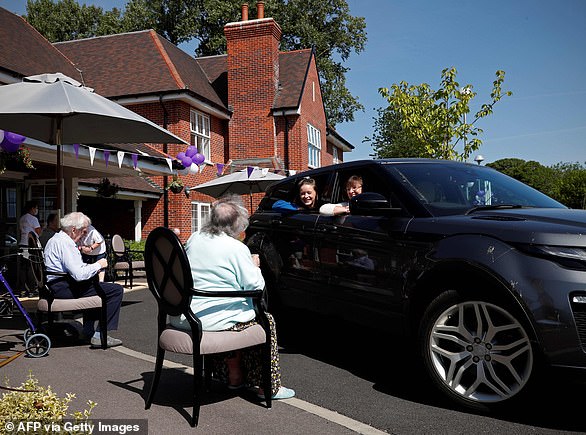 Drive-through visits at care homes were permitted at some locations for part of the first lockdown (pictured: A visit taking place at a home in Banbury, Oxfordshire)

Care organisations and Sir Keir Starmer, the leader of the Labour Party, have campaigned for visits to continue to be allowed during the second lockdown to avoid leaving residents isolated.

In its guidance, issued less than 12 hours before new lockdown measures are introduced, the Department of Health suggested that homes could set up designated visitor ‘pods’ with screens, host visits through windows at a distance, or allow one-on-one meetings outdoors.

Failing that, it said, they should try to encourage more virtual visits.

But critics said the rules ‘miss the point’ and would not work well for people with dementia, who make up a majority of care home residents and of whom many would not understand or cope with the rules.

Outdoor visits will be out of the question for most as the autumn weather turns, with rain and plummeting temperatures now the norm across the country.

Martin Green, chair of Care England, said it was disappointing that a better policy had not been devised during the months since the first lockdown.

He said: ‘We are really upset that a proper policy has not been published in time when a second lockdown was always on the cards.’