Arrayed across a plateau on an island in the high Norwegian Arctic, the 100 geodesic domes of the Svalbard Satellite Station look like abstract mushrooms sprouting from the snowy landscape.

From outside, there seems to be little going on. But each dome shelters a dish antenna, that whirs to life throughout the day and night, precisely aiming at satellites as they rise above the horizon and staying locked onto them as they arc across the sky. In the minutes before the satellite dips below the opposite horizon, software commands may be sent up and data is almost certainly sent down.

SvalSat, as the station is known, is a crucial, behind-the-scenes workhorse supporting scientific research. Located just outside the town of Longyearbyen in the Svalbard Archipelago, it is 800 miles from the North Pole, making it the northernmost satellite station in the world. 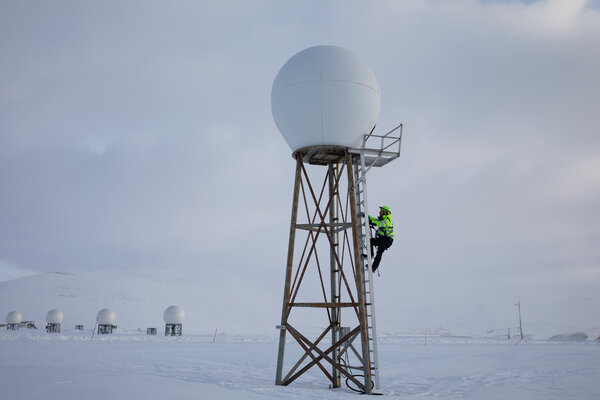 It is also one of the largest. The 100 antennas at the station, some as large as 42 feet in diameter, track more than 3,500 passes each day by several hundred satellites, including many Earth-observing ones that are essential for studying the impacts of climate change.

Among them are the two active satellites for Landsat, the joint program of NASA and the United States Geological Survey that provides images of shrinking glaciers, changing forests, eroding coastlines and other symptoms of global warming.

SvalSat tracks many other satellites as well, including those of the European Space Agency’s Sentinel program, which is similar to Landsat, and the National Oceanic and Atmospheric Administration’s Suomi NPP spacecraft, which measures sea-surface temperatures, how much solar energy is being reflected by the Earth, and many other variables related to climate.

These and other Earth-observing satellites are in polar orbits, circling from pole to pole roughly every hour and a half. Some of the orbits are sun-synchronous, meaning that the satellite passes over each point on the surface at the same time relative to the sun. This is especially useful for imaging satellites because the angle at which the sun is illuminating the Earth is consistent for every image.

Satellites link to more than one ground station around the world to provide coverage throughout their orbits. But SvalSat’s high-latitude location gives it an advantage over others, said Maja-Stina Ekstedt, the station’s director.

Because of Earth’s rotation, a station at the Equator, say, which might have been aligned with a satellite’s orbit when the satellite was crossing the pole, would have rotated far to the west, out of sight of the spacecraft, by the time it passed overhead.

Being at such a high latitude, however, SvalSat would have rotated relatively little, remaining within range. The station can connect with a polar-orbiting satellite on each of the 15 or so passes it typically makes every day.

“That’s the unique thing about Svalbard,” Ms. Ekstedt said. “We can download data, and send commands to it, every time it passes.”

As a result, the station downloads a lot of data, which is carried under the sea to the Norwegian mainland by fiber-optic cables.

SvalSat has a control room for managing the antennas, some of which handle passes by different satellites just minutes apart, and for sending and receiving signals. A control room in Tromso, a Norwegian port 500 miles to the south that is home to the company that runs SvalSat, Kongsberg Satellite Services, can operate the station as well. (The company runs about 100 ground stations around the world, including another high-latitude one, Troll, on the Antarctic coast that is smaller and can’t transmit data at high speed.)

Ms. Ekstedt manages a staff of about 40 who operate the antennas and repair and maintain equipment. While the domes are transparent to radio waves, snow can degrade the signals. So, in a location that averages about 170 days with snow a year, clearing the outside of the domes is a frequent task.

The weather can affect access to the station itself, as well. Although it’s only about six miles to the center of Longyearbyen, the station is at the end of a long steep road.

“Just to drive here it can be quite interesting,” Ms. Ekstedt said. “Every day during winter we watch the weather very closely due to challenging driving conditions and avalanche danger.” If heavy snow builds up on the road, all but those operating the satellites may evacuate from the site before the road becomes completely impassable. Occasionally workers have to be airlifted by helicopter.

Ms. Ekstedt and her family have lived in Longyearbyen for a decade. Although it has a population of only 2,500, there are a lot of cultural activities and practically limitless opportunities for outdoor recreation. “We’re a bit spoiled up here,” she said.

And they are working at a place that plays an important role supporting science. “It’s really amazing to understand what you are part of,” Ms. Ekstedt said, “when you know what all these images and data are used for in the world.”

Anna Filipova is a photojournalist based in the Arctic specializing in scientific topics who has covered the polar regions for 10 years. This work was supported with a grant from the Eyebeam Center for the Future of Journalism.