The High Court had dismissed a constitutional challenge brought against the Andrews government's COVID-19 lockdown by a Mornington Peninsula hotelier.

Victorian hospitality figure Julian Gerner, who owns Morgan's restaurant and bar in Sorrento, launched a bid in the High Court of Australia claiming the restrictions on his business and movement were unconstitutional. 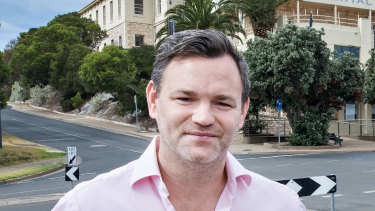 But in a hearing on Friday, the High Court accepted a Victorian government pleading that Mr Gerner's claim – that the measures violated his implied freedom of movement under the constitution – was invalid.

In court documents filed on Friday, lawyers acting for the government led by Solicitor-General Kristen Walker, QC, said freedom of movement is not supported by the constitution.

“There is no implied freedom for the people of Australia to move within the state where they reside from time to time, for any reason,” the submission said.

“The general implied freedom of movement asserted by the plaintiffs is not supported by the text and structure of the constitution.”

Ms Walker also argued that the declarations sought by the plaintiffs would produce “no foreseeable consequences for the parties” and should be dismissed.

"If the current restrictions on intrastate movement imposed by the Stay Safe Directions (No 2) are removed on Monday November 9, 2020, as foreshadowed, the relief sought will produce no foreseeable consequences for the parties," the submission said.

Mr Gerner's barrister, Bret Walker, SC, had argued that the constitution gave Australians freedom of movement that the lockdown measures had trampled on.

“The text and structure of the constitution gives rise to the constitutional implication that the people in and of Australia have freedom of movement within the states in which they reside and throughout the federal unions,” Mr Walker told the court. 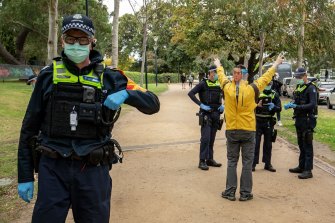 A man wearing a mask of Victorian Premier Daniel Andrews at an anti-lockdown protest in September.Credit:Darrian Traynor – Getty Images

Billionaire businessman and horse racing identity Jonathan Munz was financing the challenge, a source close to the case previously confirmed to The Age, and was expected to pour more than $1 million into the case.

Luke Beck, an associate professor at Monash University's faculty of law and a constitutional law expert, said the fact that the Justices came to the conclusion so quickly suggests they were not impressed by the arguments mounted by Mr Gerner's legal team.

"The High Court thought the case was basically lacking in merit entirely. They didn’t even need to hear from the state government’s lawyers," Dr Beck said.

"Gerner and his legal team were asking the court to create or identify a new implied constitutional freedom, which meant this had the potential to be a really big case with broad impacts, but the High Court said no, we’re not doing that."

The challenge was among a barrage of lawsuits faced by the Victorian government over its response to the pandemic. Up to 11 separate actions have been launched related to COVID-19 losses, eight of which are being pursued against the Andrews government.

The government made a similar argument, that the claim should fail because of no ongoing utility, when aspiring Liberal Party MP Michelle Loeilo challenged the curfew policy in the Victorian Supreme Court last month.

On Monday, Supreme Court judge Tim Ginnane dismissed Ms Loielo’s case, finding the government did not overstepped its authority in extending the curfew policy alongside a suite other measures, to combat the spread of COVID-19 through the community.

Justice Ginnane said that even though the curfew was a "major restriction of the rights and liberties of the people of Victoria", it was ultimately a proportionate response and did not violate the human rights of Victorians in the process.