Highways England test lorry queuing system Operation Brock on M20 today, as plans reveal M26 will be blocked to traffic and ‘paralyse’ M25 while some Kent towns will be virtually cut off

A system for making lorries queue along Kent’s motorways is being tested today, as new government plans reveal motorists will be blocked from using the M26 completely if tailbacks from Dover become too bad after Brexit.

The routes HGVs will take in the event of congestion raise the shocking prospect of dozens of Kent towns being practically cut off, behind a wall of queuing lorries on main arterial roads.

Today as a test, HGVs are using the coastbound stretch of the M20 between junctions 8 for Maidstone and 9 for Ashford.

A contraflow is in place so all other traffic uses the northbound carriageway. There are two lanes in each direction and a 50 mile per hour speed limit. 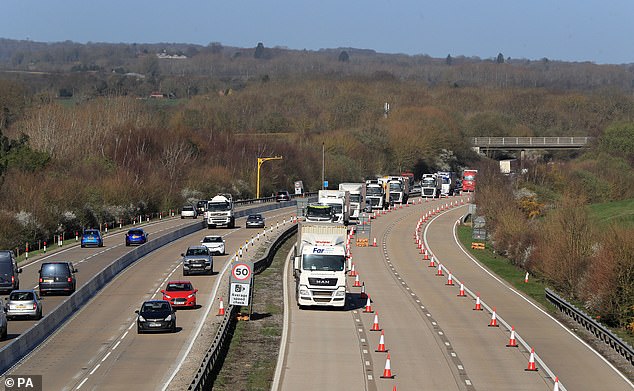 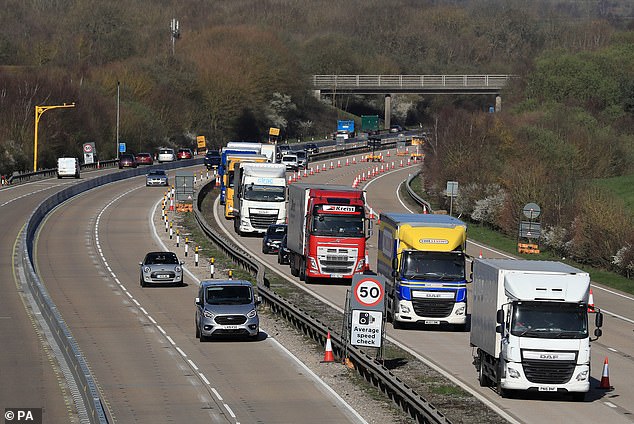 If lengthier customs checks at Dover post-Brexit cause tailbacks along Kent’s roads from the 10,000 lorries a day which pass through the port, Operation Brock will be activated

It is a test of contingency plans known as Operation Brock, which will manage the estimated 10,000 lorries a day which pass through the port of Dover if traffic jams are caused by lengthier customs checks after Brexit.

If ‘phase 1’ of Brock has to be activated, lorries will queue at the Port of Dover.

If Dover, which has space for 1700 HGVs, runs out of room, up to 2500 lorries will queue along the southbound carriageway of the M20, with normal traffic directed to a contraflow.

If tailbacks grow greater still, lorries heading south will be redirected to Manston Airport, which has room for 6000 HGVs, in eastern Kent near Margate.

They would then head south to Dover as traffic permitted, along the A256, creating a wall of traffic which could leave the road unusable for local motorists in dozens of towns including Margate, Ramsgate, Sandwich, and Deal.

Phase four of Operation Broak, which kicks in if Dover, the M20, and Manston all fill up with lorries, calls for the M26 to be closed to westbound traffic – meaning car drivers will face a circuitous detour around the M20 and M25.

That area is already a traffic blackspot due to its proximity to the Dartford Crossing.

Former Defence Secretary, Sevenoaks MP Michael Fallon, told MailOnline: ‘Shutting the M26 is the wrong answer. It will only further paralyse the M25 and M20.

‘The result will also mean traffic jams night and day on the A25, the key alternative west-east route; at least five schools on or close by the A25 in my constituency will be directly affected.

‘The M26 can only hold a thousand lorries: it’s the wrong answer. Freight traffic needs to be regulated much further back, before it even enters the M25.’ 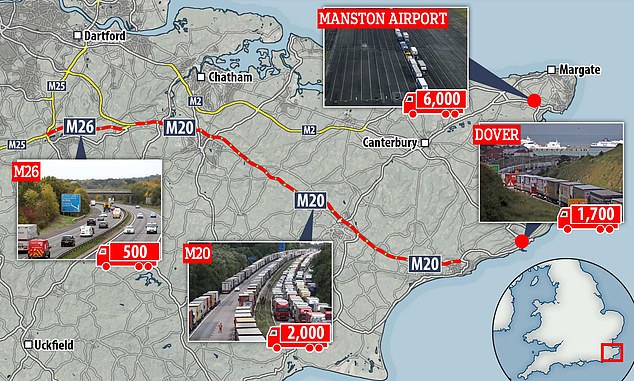 Contingency plans are being made for more than 10,000 heavy goods vehicles to be parked in Kent in the event that longer customs checks cause massive tailbacks

Highways England said it wants to make sure Operation Brock is ready before the UK leaves the EU, which is expected to happen on either April 12 or May 22, depending on whether MPs back the Prime Minister’s Brexit deal this week.

A spokeswoman for the Road Haulage Association said: ‘Highways England originally planned to implement Operation Brock as a Brexit contingency. The RHA is therefore mystified as to why, considering the fact that Brexit is now over two weeks away, Brock has already been activated.

‘Kent motorists have recently had to contend with a multitude of roadworks on the M2 and M20, often with full closures of both routes, some simultaneously.

‘We think that Highways England’s approach is inflexible and needs to change to take account of the prevailing situation.

‘As things stand, Kent businesses and residents have to adapt their working patterns to accommodate Highways England plans. This is an outdated concept and must change.

‘The key word here is “temporary”. Brock was never intended to replace Operation Stack – put in place as a temporary contingency measure for when cross Channel services fail – but to alleviate congestion as a result of new border crossing processes post-Brexit.

‘It’s vital that the tens of thousands of trucks and other vehicles that use this route every day get an indication as to how long this current “temporary” situation is due to last.’

Heidi Skinner, a policy and public affairs manager at the Freight Transport Association, based in Tunbridge Wells, told Kent Live that lorry businesses will take the the contraflow system in their stride – but are more concerned about what Britain’s future relationship with Europe will look like.

She said: ‘We need more clarity around customs procedures and border readiness – all of these things – to ensure freight flows as seamlessly and frictionlessly as it does today.’ 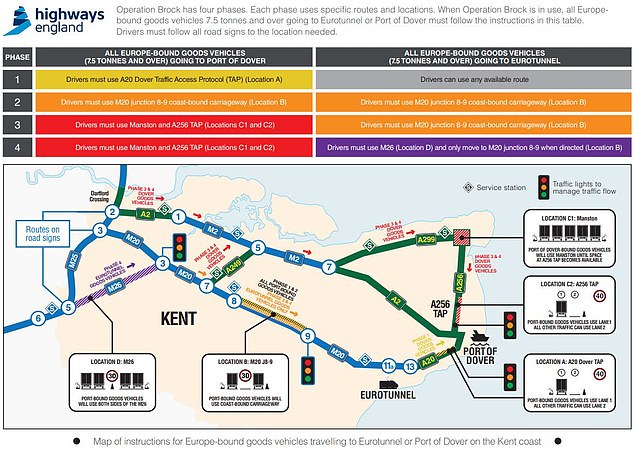 This latest map from Highways England shows how, if needs be, lorry traffic will take over the southbound carriageway of the M20, the whole of the M26, and the A256 in rural Kent

Last year Road Haulage Association chief executive Richard Burnett warned traffic jams of that length would mean trips became unprofitable – and asked where truckers would go to the toilet along miles and miles of motorway.

He said: ‘Last year 2.6million trucks passed through the port of Dover with another 1.6million travelling to mainland Europe through the Channel Tunnel and their passage through borders has been frictionless.

‘If border controls include full customs procedures, with each truck taking potentially, 45 minutes to check, the number of HGVs caught up in the resulting tailbacks will be massive.’

Operation Brock: the government’s latest contingency planning which may CLOSE the M26 to car traffic

Operation Brock is a set of measures to keep the M20 open in both directions between junctions 8 and 9 in the event of disruption to services across the English Channel, by using different holding areas.

Phase 1 – In the event of excessive disruption to services across the English Channel, improved holding capacity in the Port of Dover and Eurotunnel, as well as on the A20 approach to the port (Dover TAP), would be used.

Phase 2 – If phase 1 capacity is reached, we will start queuing Europe bound lorries that are 7.5 tonnes and over on the coast bound section of the M20 between junction 8 and 9 with cars and other vehicles using a contraflow on the London-bound carriageway.

Phase 3 – If phase 2 becomes full, lorries heading for Port of Dover will be directed to Manston Airfield, while the M20 is used to hold traffic for Eurotunnel. Traffic lights on the A256 after Manston Airfield will help to manage traffic arriving at the port.

Phase 4 – If the M20 holding area and Manston becomes full, the M26 could be used to hold additional lorries heading for Eurotunnel.