A GRUESOME Nazi ‘death quarry’ containing over 3,500 bodies has been discovered in Russia.

The mass graveyard is located in the city of Salsk nd reveals horrific new evidence of crimes committed by the regime during their occupation of the region in World War II. 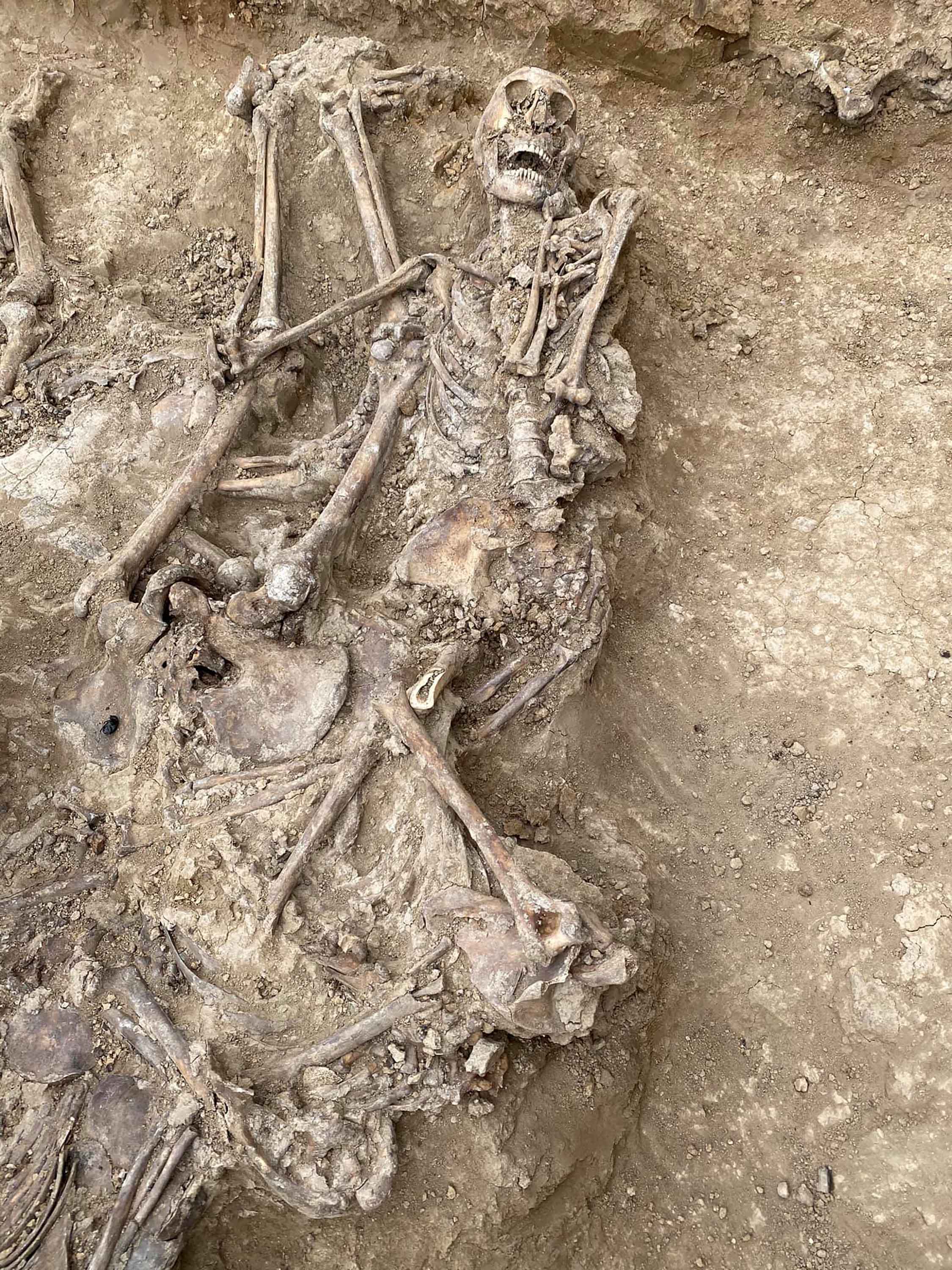 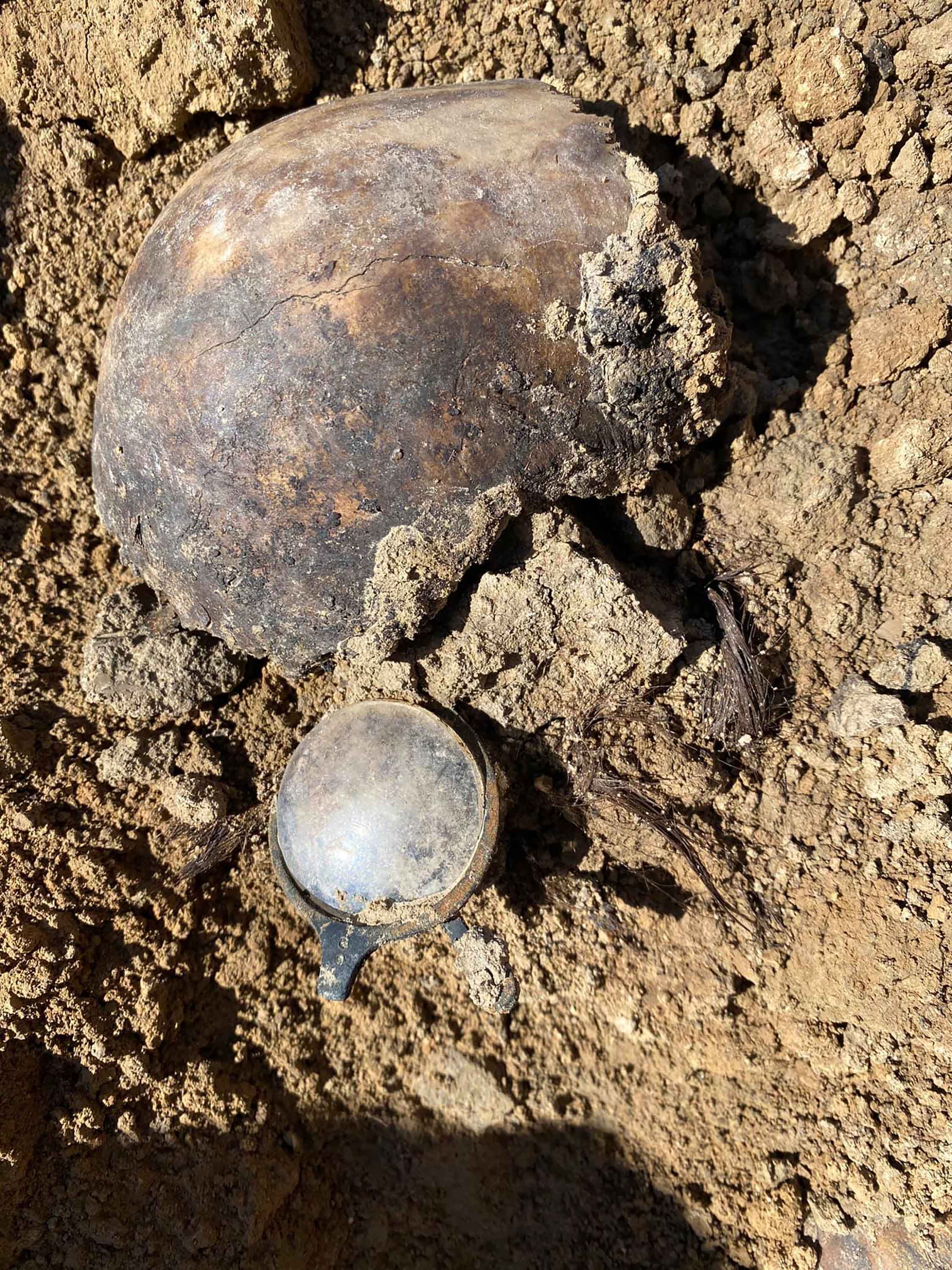 Shocked excavators on site have been especially appalled at the discovery of the remains of dozens of slaughtered women and children, including babies.

Evidence suggests that many were stabbed with bayonets, kicked in the head and beaten to death.

The operation, which authorities are calling an “establishment of historical justice” seeks to unearth a legal finding for the Nazi crimes “without a statute of limitations”.

It has been headed by volunteer search squad Mius-Front who is now working closely with the country’s Investigative Committee in charge of probing serious crimes.

Mius-Front said: "Our expedition continues to work in the death quarry of the city of Salsk.”

“There were many children among them.

“Today 15 children from one to ten years old were found and taken out. It is scary.”

They added: "There is nothing more terrifying in war than seeing children die.

“Any war veteran will tell you that.

The discoveries were made possible after the declassification of documents from KGB secret service archives relating to the Soviet era.

The organisation had previously hidden the scale of the Nazi atrocity from its own people but the release of secret files from Soviet-era vaults is enabling searches for human remains to go ahead.

But despite a number of excavations taking place across the country, the findings at the site in the Rostov region, have left diggers utterly horrified at the barbarity of the killings.

“For the majority, death came from blows to the head with a boot or fist,” said the archaeologists.

“Perhaps the children's heads were smashed against the dried clay of the quarry.

“We have not encountered this before.” 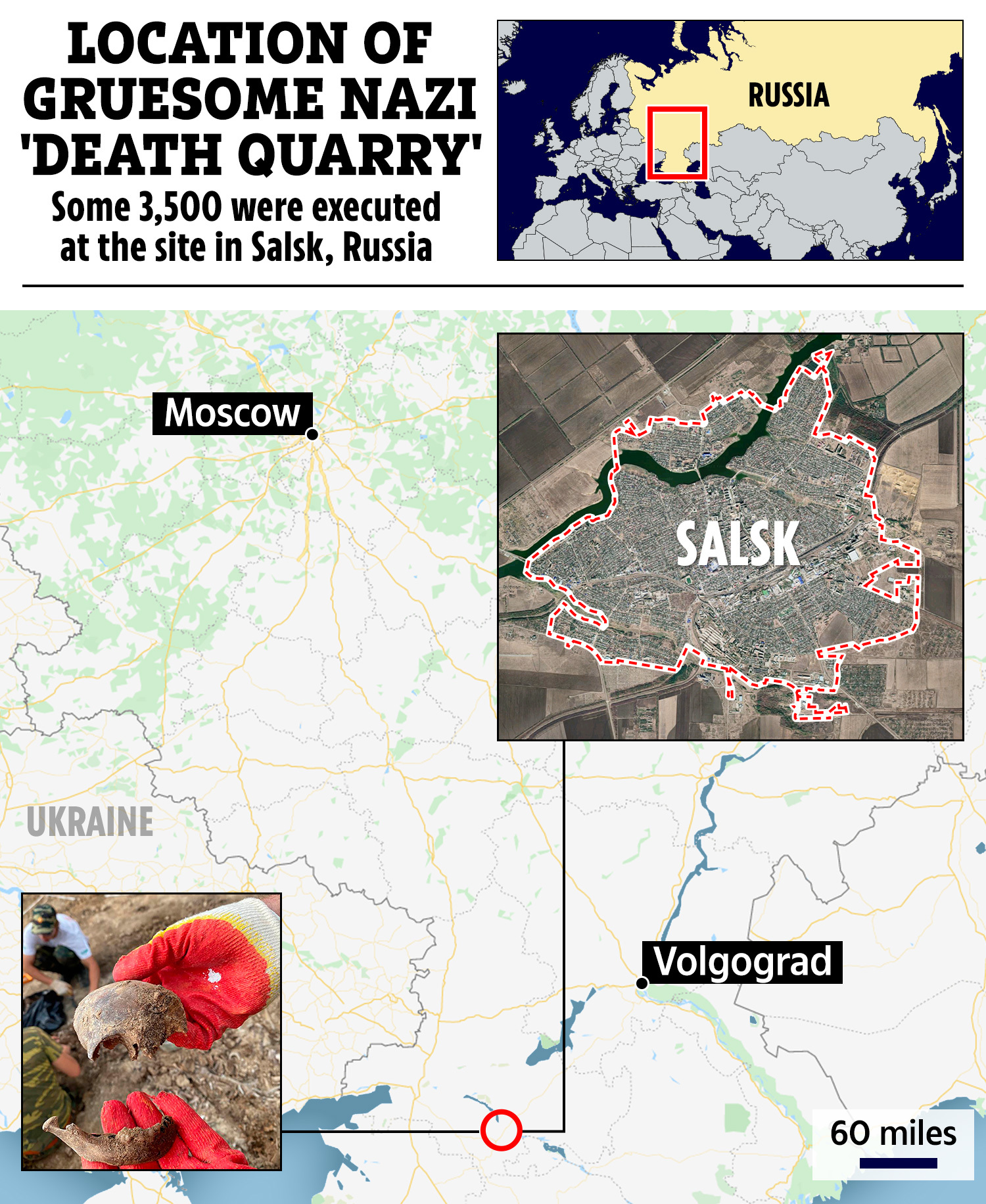 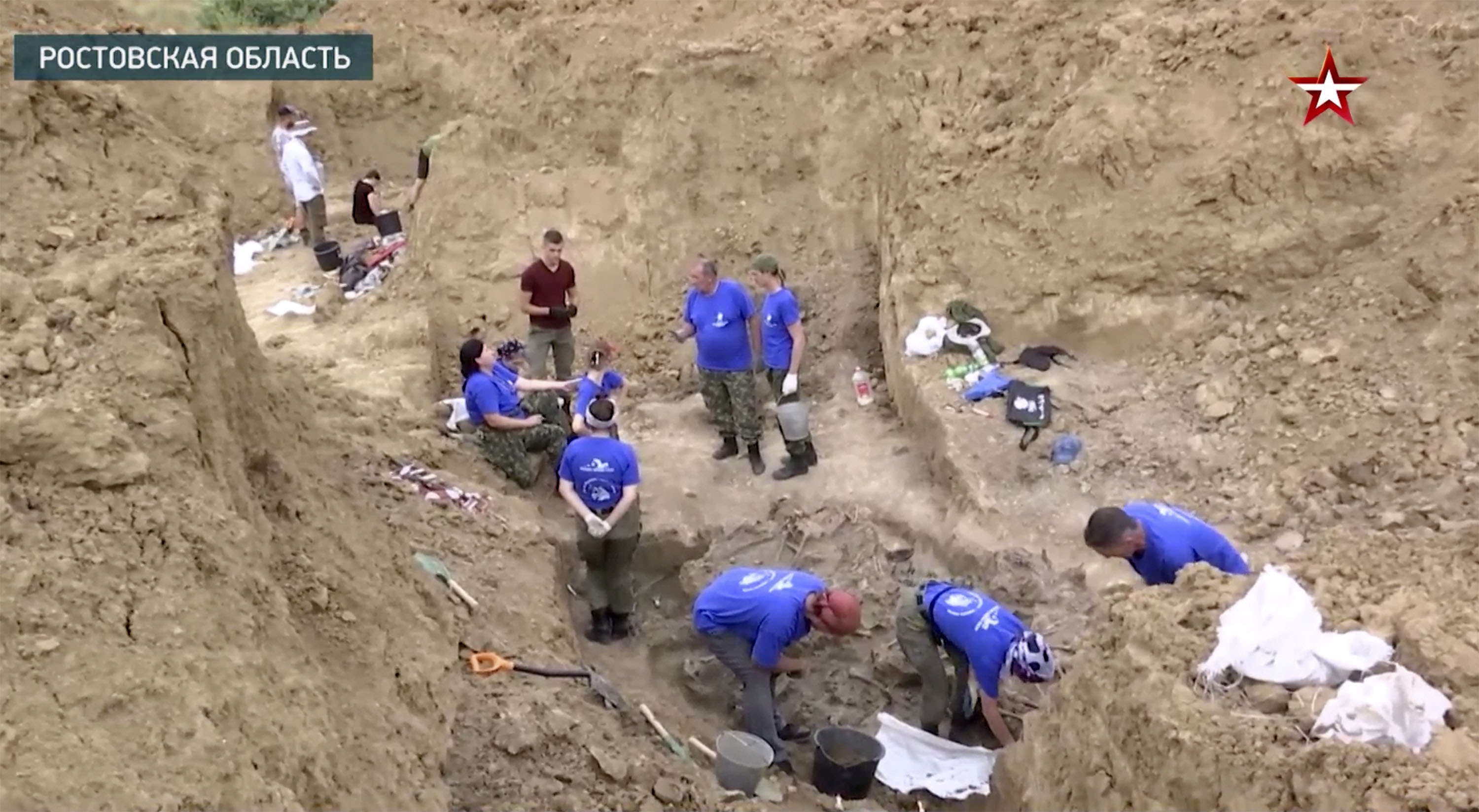 A few Red Army prisoners of war were among the dead but most were the old, the young, and a hugely disproportionate number of women.

Among 60 sets of human remains where DNA analysis has been conducted, 16 are women, and 19 children between the ages of two and late teens.

The group’s head Andrey Kudryakov is heard on video saying: “This is a child’s boot, here is a very small collarbone.

“Here a tiny skull – broken. “Nearby is probably his mum.

“A little four or five year old human. “Together with mum in this dreadful execution pit.”

The excavations in the execution pits is “psychologically hard”, but he said: “This is not ordinary archeology or search work.

“This is the establishment of historical justice.”

This area – not well investigated previously –  “is now revealing its terrible secrets”.

“We see how many kids died here.”

Kudryakov also told of a young pregnant woman with a Cossack cross around her neck. 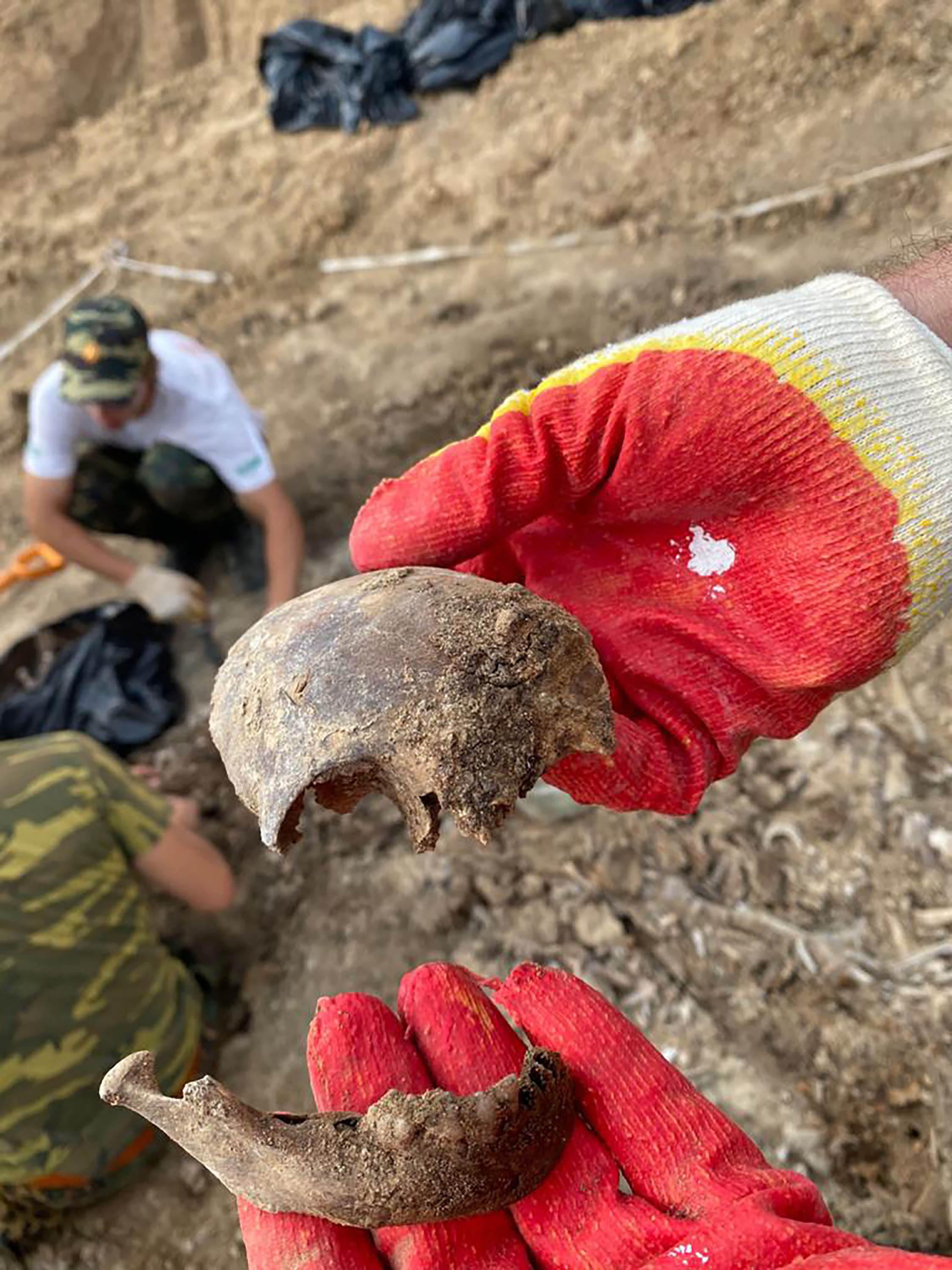 “She clasped her head in her hands in horror so as not to see how she was being killed,” he said.

“Next to her lie the torn children, they tried to hide from death, but Hitler's executioners finished them off with bayonets.

“They didn't waste bullets, or maybe they ran out of cartridges.

“The punishers had  much  work in the clay quarry of Salsk,

“it took a lot of ammunition to shoot hundreds of people, so they saved their bullets, and beat them with rifle butts, kicked with boots, and stabbed with bayonets."

The dead are mostly believed to include Russians, Jews and gypsies relating to Operation Barbosa – launched by the Nazis in 1941.

The hope is to match some victims by DNA to their modern-day relatives.