The House of Lords last night inflicted 14 defeats on the Government over its plans to give the police greater powers to stop disruptive protests as peers slammed ministers for trying to ban ‘noisy’ demonstrations.

The Government is pushing ahead with its mammoth Police, Crime, Sentencing and Courts Bill but the Lords have taken an axe to many of the key measures.

Ministers were defeated over plans which would allow police to stop protests which are judged to be too loud and over plans to create a new offence to target protesters who lock themselves to something.

Peers labelled the proposed crackdown on noise ‘plain nasty’ and questioned why the Government had included it in the legislation, arguing that ‘extremely foolish’ ministers lacked ‘common sense’.

The damaging defeats represent a significant set back for Boris Johnson and Home Secretary Priti Patel as they seek to introduce the bill largely in response to protest action taken by groups like Extinction Rebellion and Insulate Britain.

Ministers signalled this morning that they will seek to reinsert the measures which have been deleted by the Lords when the draft legislation returns to the House of Commons.

That will put the Government and the upper chamber on a collision course as they enter into the back and forth ‘ping pong’ process of MPs voting for measures and peers voting to remove them. 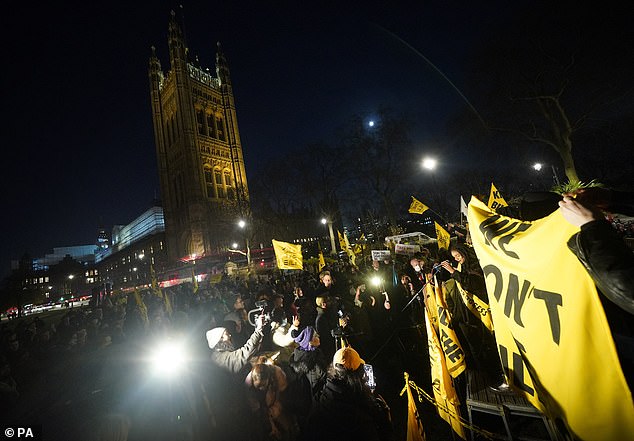 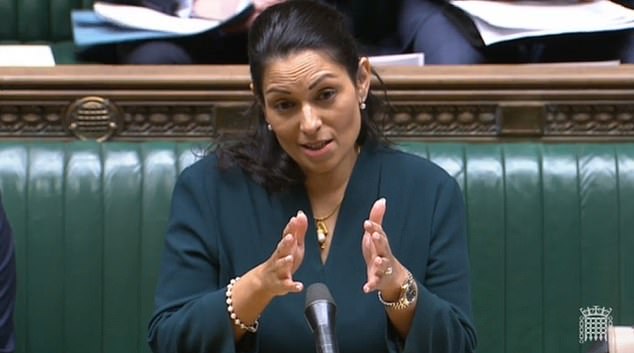 Peers backed a Labour-led amendment by 261 votes to 166, a majority of 95, to scrap the proposed power to impose conditions on protest marches judged to be too noisy.

A similar amendment put forward by the Liberal Democrats was then passed by 238 votes to 171, a majority of 67.

The defeats came as protests against the draft legislation took place outside Parliament, with the sound of drumming audible in the chamber.

Labour frontbencher Lord Coaker said: ‘The right to protest in this country has never, ever had to have a condition placed upon it which is about noise.

‘I believe that making a noise is a fundamental part of the freedom to protest properly in a democracy.’

Green Party peer Baroness Jones of Moulsecoomb branded the Government move to impose noise conditions as ‘repressive’, adding: ‘They are plain nasty and they really have to go.’

The Government also faced criticism from Tory peers who said the measures ‘go far too far’.

Tory peer Lord Deben said: ‘We are a democratic society and if I can’t go outside and make a noise to point out that I think that a whole range of things that the Government or any government does are unacceptable, then my human rights are very seriously impugned.

‘Dissent and protest are essential parts of democracy. This goes too far.’

Refugee campaigner and Labour peer Lord Dubs said: ‘Without noisy demos a lot of changes don’t happen. This is the nature of our democracy and this Government is trying to trample all over it.’

Former Labour MP Baroness Hoey, who sits as a non-affiliated peer, said: ‘The idea that anyone can go on a demonstration and not make noise is just such a lack of common sense that I really don’t understand how anyone could possibly have put this forward.’

Former director of public prosecutions and independent crossbencher Lord Macdonald of River Glaven said: ‘I don’t think the Government is trying to destroy democracy or to steal from us all of our freeborn rights but I do think they are being extremely foolish.’ 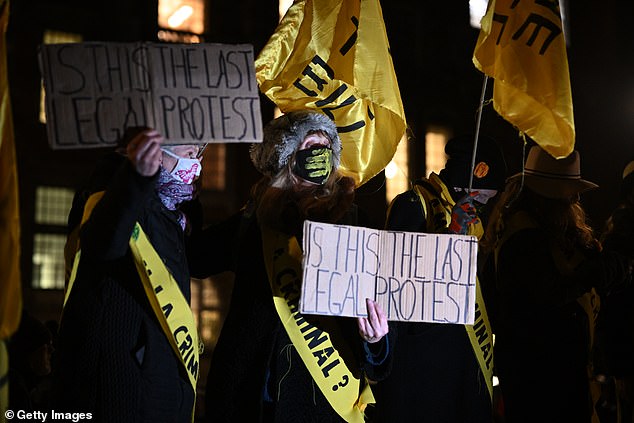 The defeats came as protests against the draft legislation took place outside Parliament, with the sound of drumming audible in the chamber 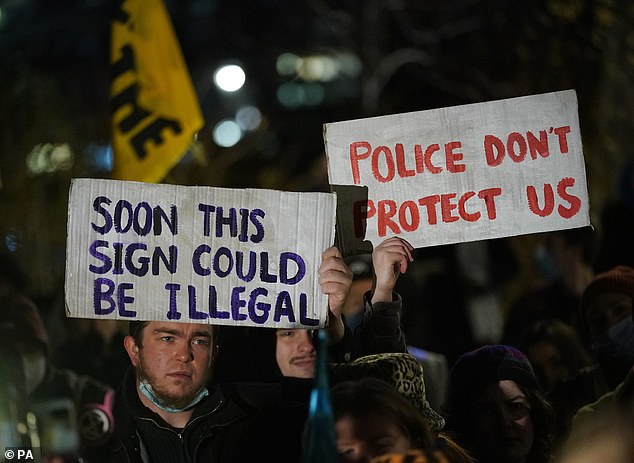 Peers backed a Labour-led amendment by 261 votes to 166, a majority of 95, to scrap the proposed power to impose conditions on protest marches judged to be too noisy

But Home Office Minister Baroness Williams of Trafford defended the measures, telling the chamber: ‘Noise generated by protesters can have a significant and detrimental impact on the wider public.

‘It is unacceptable that certain protests can seriously disrupt the lives of ordinary people and it is absolutely right that the Government gives the police the tools that they require to tackle disruptive protests.’

She added: ‘These measures do not stop noisy protests, far from it. The overwhelming majority of protests will continue as now without any conditions being attached.

‘But it is right that where a protest crosses the line in terms of causing disproportionate harm or disruption to others, the police must have the necessary powers to take effective action.’

The Lords rejected a Government move to create a new offence of ‘locking on’, a tactic used by protesters to make it difficult to remove them, carrying with it a penalty of up to a year in prison. The provision was rejected by 216 votes to 163, a majority of 53.

Peers also succeeded in watering down plans to impose tougher sentences on people who block roads. The Government wanted the provision to apply to all roads but peers said it should be restricted to major routes and motorways.

Deputy Prime Minister Dominic Raab suggested this morning that the Government will bring back the deleted measures.

Asked if they would be reintroduced, the Justice Secretary told BBC Radio 4’s Today programme: ‘We’ll look very carefully at all of that, but, yes, absolutely. 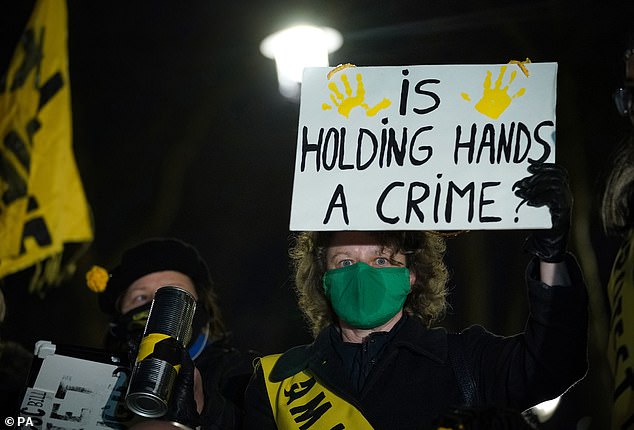 ‘In relation to noise, of course we support the right to peaceful and rambunctious protest, but it cannot be allowed to interfere with the lives of the law-abiding majority.’

The bill has now almost completed its passage through the Lords and will soon be sent back to the Commons so MPs can consider the changes made by peers.

Any changes then made in the Commons will then be sent to the Lords for peers to consider in the process known as ‘ping pong’.

Peers may choose to battle the Government in the opening rounds of ‘ping pong’ but ultimately they will be expected to backdown because of the primacy of the elected Commons.