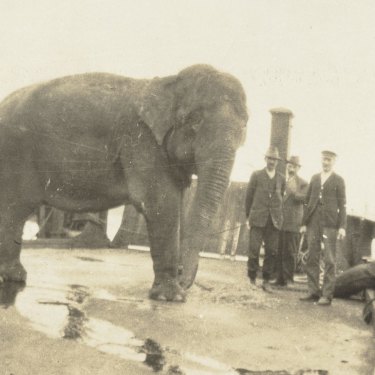 Jessie the elephant en route to Taronga Zoo in 1916.Credit:Courtesy of State Library of NSW

How do you move a zoo? And how would you get an elephant named Jessie across Sydney’s CBD and harbour without a bridge or large trucks?

It took years of logistics to work out how to relocate 228 mammals, 552 birds and 64 reptiles from Sydney’s first zoo at Moore Park to the new bush zoo – promising nothing but air between visitor and animal – at Taronga Park in 1916.

This newspaper speculated the lions and tigers would be easy to move in crates. The crocodiles and pythons also presented “no insuperable difficulty if handled with care”. 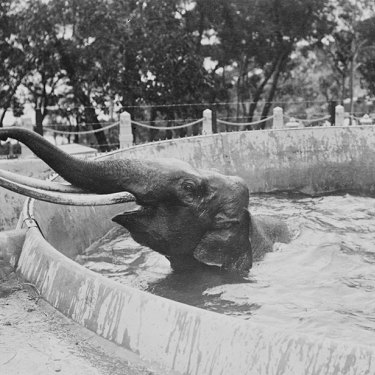 But Jessie, the zoo’s large elephant, was a problem that couldn’t be boxed. “You can’t put four tonnes of an elephant in a cage, and if you could, you wouldn’t be able to move the cage afterwards. So, Jessie will walk. It remains to be seen how the airing will agree with her,” the Herald reported.

How to Move a Zoo, an exhibition opening on November 20 at the Museum of Sydney, reimagines the parade of animals through Sydney’s streets with an interactive exhibition.

Mounted by Sydney Living Museums with the NSW State Archives, it combines original archival images and animation to retell the story of what some called Sydney’s Noah’s Ark.

Adam Lindsay, the executive director of Sydney Living Museums and the State Archives and Records Authority, said he became fascinated by this forgotten part of Sydney’s history when he discovered photos and other documents in the archives five years ago.

He even started having “anthropomorphic fantasies” about what could have gone wrong. “What if the chimps had escaped?” he said.

Using animation, visitors can follow an individual animal – such as a lion called King – crossing the city and imagine what could’ve happened if that animal had taken off in a Ferris Bueller’s Day Off scenario.

During the move, newspapers reported that “denizens of the Indian jungle, roamers of the African veldt, stately ostriches, kangaroos (and) screeching parrots walked the streets of Sydney”.

The early morning serenity of city dwellers was disturbed by the “mournful yells of hyenas, angry roars from lions and tigers” and “wild beasts confined to cages”.

Back in 1916, zookeepers were worried about the risks of moving ferocious and strong creatures through city streets. Even six years ago, Taronga Zoo was challenged by the logistics of how to move its giraffes.

Sydney’s zookeepers decided to risk it with Jessie. She was a placid creature, “a docile and peaceful pachyderm” said to be loved by the generations of Sydney children who had ridden on her howdah. 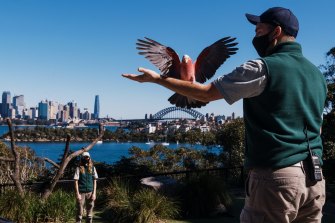 Bird keepers Jaqueline King and Brendan Host with Jasper the galah earlier this year with Sydney Harbour in the background, a far cry from 1916 when animals were moved from Moore Park to Taronga without using the Sydney Harbour Bridge, which opened 16 years later.Credit:James Brickwood

Accompanied by an entourage, Jessie walked down Dowling, Bourke and Palmer streets at about 6km/h. She crossed tram rails and passed through narrow streets with only a nervous glance. Jessie crossed from the Domain to walk down Macquarie Street to a waiting flat-topped barge at the harbour.

By the time she got there, her feet were tender from the macadam, according to reports. That didn’t stop her though. “With hardly any hesitation, Jessie walked on to the punt, ran her trunk over the gate,” Sydney’s Evening News reported the next day. “A word from the keeper, and she stood as still as a rock during the trip down the harbour.”

On arrival at Taronga’s jetty, there was a moment of anxiety when the pontoon dipped into the water under “Jessie’s fairy tread”.

After some sharp words from a keeper, she “tiptoed across the landing”. The trip that had taken years to plan took a little over 90 minutes.

For Sydney residents who were facing endless reports of Australian casualties during World War I, the zoo move was a joyous distraction.

It was good timing that Sydney Living Museums’ exhibition would likely open when Sydney reopens after lockdown, Mr Lindsay said. “It wasn’t planned to be a panacea”, he said, but he liked the idea that it would “give you hope at a shit time”.

The exhibition’s curator Anna Cossu said the zoo needed to be moved because the site at Billy Goat Swamp, where Sydney Boys and Girls schools are located today, was too small. It also flooded, or was too dry, and its barred cages and cement floors were criticised by the public as inhumane.

The new zoo – designed to rival Melbourne’s – had also been planned to include an aquarium, and space to grow to accommodate more animals including giraffes. Today, Taronga cares for over 5000 animals from over 350 species.

“It was a revolutionary new way of zookeeping, with open enclosures. There was nothing between you and the animals but air, ” Ms Cossu said. That idea, though, panicked some residents who lived near the new zoo.

In need of some good news? The Greater Good newsletter delivers stories to your inbox to brighten your outlook. Sign up here.