In early 2005, a conspiracy theorist writing under the pseudonym John Conner — the name of the resistance leader from “The Terminator” movies — decided he needed to warn the public about the evils of a roadside tourist attraction in northeastern Georgia.

“The Guidestones should be smashed into a million pieces, and then the rubble used for a construction project,” Conner wrote in part on his website, according to archival news reports. “The Guidestones have a deep Satanic origin and message.”

He was referring to the Georgia Guidestones, a 19-foot-tall four-slab granite monument bearing a cryptic 10-part message in 12 languages. Nobody knows precisely who constructed the monument, but it stood there for more than four decades.

The monument was demolished Wednesday after authorities said someone detonated an explosive device there.

Authorities have not identified a motive in the detonation, and the Georgia Bureau of Investigation has said simply that “unknown individuals” detonated the explosive. The agency said the monument was destroyed for “safety reasons.”

Dice has spread false claims about the results of the 2020 presidential election and expressed baseless views about the 9/11 attacks.

In an email to NBC News on Friday, he said in part: “In 2005 when I said they should be taken down, I clearly meant through the proper, legal, civic channels, echoing many of the locals who were opposed to the monument being erected in the first place.”

He is not the only public figure who has used their platform to rail against the supposed evils of the Guidestones, apparently vexed by their mysterious provenance and inflamed by strange inscriptions that appear to endorse eugenics and population control.

In recent years, the Guidestones became a recurring symbol in the QAnon conspiracy movement, the subject of videos and other digital content that baselessly linked them to the Covid pandemic and a fictional cabal of sex traffickers.

Alex Jones, the incendiary conspiracist and Infowars host, visited the attraction in 2020 and called it “the birthplace of the modern depopulation movement,” referring to an inscription on the granite that called for keeping the Earth’s population under 500 million. 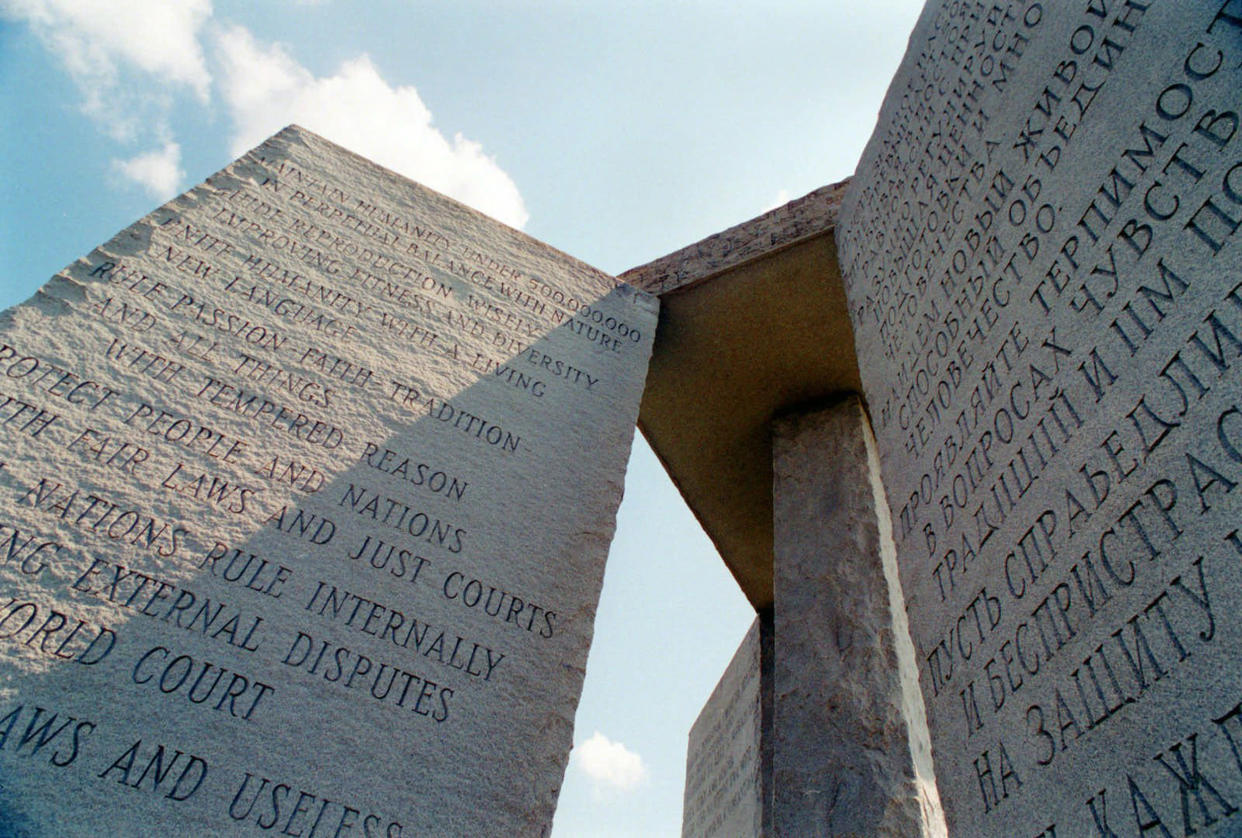 Kandiss Taylor, a conservative Republican who ran for the Georgia gubernatorial nomination and placed third in the state’s May 24 primary, claimed the slabs of granite were satanic and made tearing them down a key pillar of her platform.

“God is God all by Himself. He can do ANYTHING He wants to do,” Taylor tweeted Wednesday. “That includes striking down Satanic Guidestones.”

Katie McCarthy, a researcher at the Anti-Defamation League who studies extremism and conspiracy theories, said in an interview that it makes sense that the monument would draw the intense interest of people who believe in far-reaching government plots.

“The principles laid out on the Guidestones advocate for things like depopulation, eugenics, a global government, and these ideas play into conspiracy theories about a New World Order,” she said. “It’s proof to them that the global elite is plotting to kill off humanity.”

McCarthy said the Guidestones have attracted scrutiny since they were erected in 1980, but the rise of the internet and the growing influence of the Christian right elevated them in conspiratorial circles.

The monument is believed to have been commissioned by an unknown person or entity working under the pseudonym R.C. Christian. (Dice, for his part, once claimed that person is actually a member of a 500-year-old sect called the Order of the Rosy Cross.)

Georgia officials embraced the mystery, advertising the Guidestones on a tourism website. Christopher Kubas, the executive vice president of the Elberton Granite Association, said it drew more than 20,000 visitors a year, according to NBC affiliate WYFF of Greenville, South Carolina.

But the mystery darkened when an explosive device damaged part of the structure this month — something a Georgia prosecutor called an “act of domestic terrorism.”

“The destruction of a public building by explosive is inherently intended to influence the actions of the governing authority that owns the structure,” Parks White, the Northern Judicial Circuit district attorney, said in an email.

“The use of violence to sway or alter the behavior of any government agency is terrorism,” White added.

McCarthy said the attempt to blow up the Guidestones is a stark illustration of the “real-world consequences” of conspiratorial thinking that takes root on the internet.