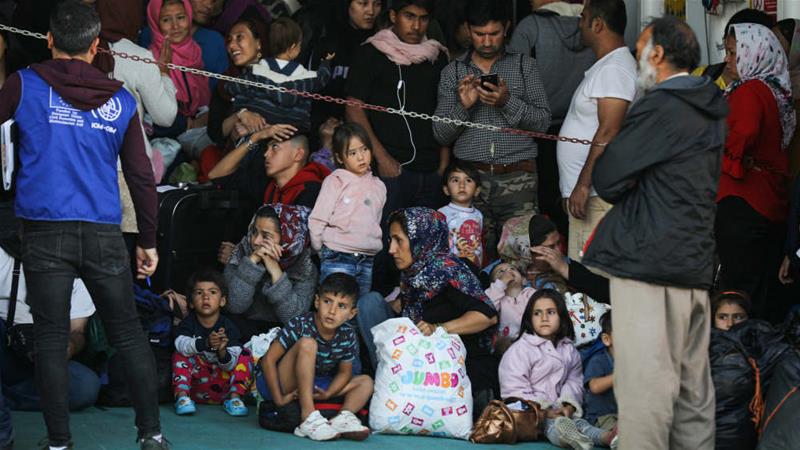 Athens, Greece – A new asylum law has passed in Athens, amid acrimonious debate and a storm of withering criticism from Greek and international aid organisations.

Critics, however, say it breaks European and international humanitarian law and creates a monstrous mechanism that will likely condemn deserving asylum applicants to deportation and death.

The United Nations High Commissioner for Refugees (UNHCR) said the law “puts an excessive burden on asylum seekers and focuses on punitive measures. It introduces tough requirements that an asylum seeker could not reasonably be expected to fulfil.”

European Commissioner for Human Rights Dunja Mijatovic on Thursday said she fully supported the aid groups. “I really join my voice to their voice when it comes to concerns in relation to the draft law,” she said.

New Democracy was supported by the Socialist party to garner 180 votes in the 300-seat parliament. The left-wing Syriza party, the Communist party, the right-wing Greek Solution party and the party of former left-wing finance minister Yanis Varoufakis all voted against.

Former Prime Minister Alexis Tsipras lashed out at New Democracy for what he said was institutionalisation of pushbacks – illegal returns of applicants without examining their claims for protection.

“‘Let’s protect our maritime borders from the invasion. Let’s look into deterrence at sea. Even pushbacks aren’t a bad idea. Let’s make these people understand that their life in Greece will be harder than wherever they’re coming from.’ These are the sorts of things your MPs and officials used to say and still say,” said Tsipras, who leads the left-wing Syriza party, which governed Greece for the four years until July 2019.

Deputy Citizens’ Protection Minister George Koumoutsakos struck back: “Your law brought 75,000 asylum applications, which we inherited, thousands of people who are waiting, which is not humanitarian, a zero-rate of returns [to Turkey], which exposed us to criticism from Europe, and a law that worked not to control or deter, but as a huge institutional magnet.”

Greece is under extreme pressure due to increased migratory flows from Turkey. It has received more than 45,000 potential asylum-seekers this year, representing 60 percent of migrants who have crossed the Mediterranean. It is processing 11 percent of all the European Union’s asylum applications – seven times its fair share under EU rules.

While it has sent 32,000 asylum-seekers to other EU members in the past three years, the relocation mechanism under which most went was temporary. For the past two years, Greece has been responsible for processing all new arrivals and has more than 88,000 applications for asylum or international protection on file. Reception centres on its Aegean islands built for 6,000 people are now overflowing with a record 35,000 people.

The government believes the new law will allow it to filter disingenuous asylum seekers from true refugees before they enter the bogged-down asylum system.

“The previous [Syriza] government had a welcome policy that allowed hundreds of thousands to cross the border,” says New Democracy MP Maximos Harakopoulos, who heads the parliamentary committee that screened the bill. “They thought migrants sun themselves and then move on. At some point, central European countries felt the pressure from their societies and that’s how we got fences erected on our northern border,” he told Al Jazeera.

“We want to separate who is really a refugee and who is an economic migrant, from Africa to Pakistan,” Harakopoulos added.

The government believes that, in addition to putting the asylum process beyond the reach of unqualified applicants, the law will help it deport 10,000 unqualified asylum seekers next year. That is five times more than Greece deported in the three years under an EU-Turkey agreement.

Human rights lawyers say the law’s provisions chip away at the spirit of international humanitarian law and the EU’s Asylum Procedures Directive.

For instance, the law introduces a series of “cooperation duties”, such as regularly reporting to authorities or informing them of changes of address. These act as bureaucratic trap-doors, lawyers say, leading to automatic rejection.

Human rights lawyers also say the law introduces fast-track procedures, including for children. These lift protection from deportation for those who are rejected in the first instance, even if they appeal, which the UNHCR says introduces a danger of refoulment – sending a potential refugee back into a hazardous environment.

“Even the articles of the law that appear to integrate the [EU Asylum Procedures] Directive, taken in sum, produce the opposite effect to what the Directive intends,” says Alexandros Konstantinou of the Greek Council for Refugees, a respected legal aid group that has helped tens of thousands of people over 30 years.

For instance, the law increases incarceration for refugees from three to 18 months. It does not count children born outside a refugee’s country of origin as family members. And it attempts to define which countries are safe for refugees to return to, even though this may change from day-to-day or case-to-case.

The most stringent new provisions are in the appeals process. As of January, the UNHCR will lose its seat on appeals committees. Appealants will face a panel of three judges instead. And they will be given a tight deadline of up to five days to file an appeal.

“The law obliges the state to provide you with legal aid, but last year only one in five appealants got a lawyer,” says Konstantinou. “Yet the law requires you to fill out an affidavit in Greek explaining the substantive and legal reasons why you’re appealing. That effectively excludes a lot of people.”

Greece never won plaudits for the conditions in which migrants and refugees survive on its soil. On the contrary, its failure to provide EU-funded healthcare and decent nutrition is currently under investigation by the EU’s anti-corruption authority.

Ever since it was founded in 2013, however, the Greek Asylum Service has been hailed as an institutional and moral success. Now Greece risks going back to a dark period when the police ran its asylum system and the European Court of Human Rights allowed applicants to have their cases heard in other EU states, because the Greek system was considered too unprofessional.

Lawyers suggest the new regime may never get off the ground. “This law will raise so many issues it’s going to be challenged in national and international courts. Past precedent suggests that it won’t stand up to international refugee law,” says Konstantinou.

“There were two ways to solve [the crisis on islands],” he says. “One was to reinforce the system, have more capacity, and move people faster through the system while maintaining a high standard … the other way is to deprive people of the ability to apply, and exclude large groups … this law clearly took the second choice.”