A fish and chip shop at a coronavirus hotspot has been blasted after hundreds of customers flocked to it after being offered a 45p fish and chips deal.

Hungry punters queued for hours outside Mother Hubbard’s fish and chip shop in Bradford, West Yorkshire, on September 11 to take advantage of the eatery’s special offer.

Nicola Khan, who captured the swathes of customers on video, said people were not wearing masks or adhering to social distancing as they flocked to the restaurant.

She said: ‘Absolutely shocking, people queuing like sardines, no social distancing, no masks – and all for 45p fish and chips.’

The clip also appeared to show metal barriers which were put in pace by the restaurant in an effort to facilitate sensible queuing outside the store. 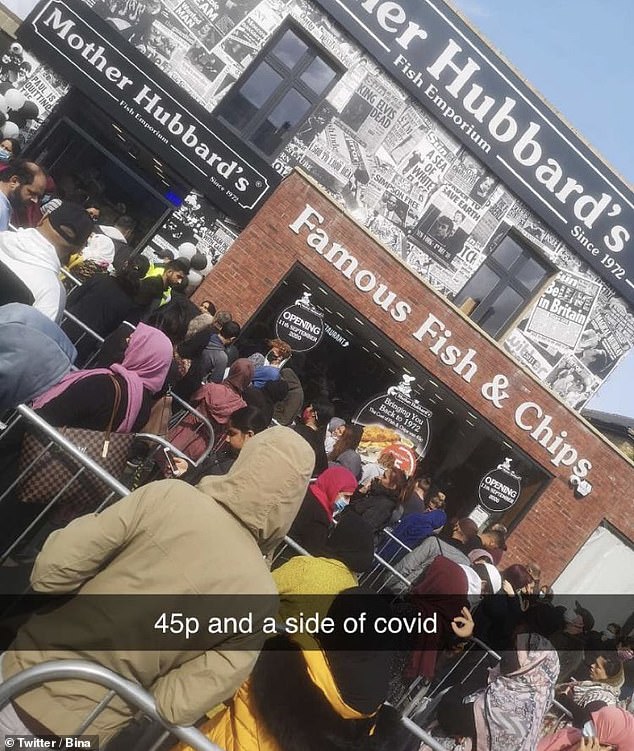 Hundreds of customers flocked to Mother Hubbard’s fish and chip shop in Bradford, West Yorkshire, on September 11 after the eatery offered helpings of fish and chips for just 45p

But one passer-by added that scenes like the one outside Mother Hubbard’s were ‘definitely a contributing factor’ to rising infection rates.

Mother Hubbard’s responded to the controversy, claiming that while the scenes did look ‘chaotic’, the restaurant ‘tried its best’ to manage things ‘professionally’.

Markings were made on the ground to enforce social distancing, while masks and hand sanitiser were also handed out to those in the queue, the chip shop added.

A spokesman from Mother Hubbard’s said: ‘Our priority is to keep the public and our staff safe, that is always our intention. In the videos and pictures, the scene did look chaotic, but they don’t tell the full story.

‘We had professional barriers in place, we had markings on the ground so people could socially distance, we were giving out masks and hand sanitiser to the customers and only two to three people were allowed inside the store at one time.

‘We can understand why people have perceived the scenes negatively, but we tried our best to manage things.

‘If you look at the Government’s Eat Out to Help Out scheme, no restaurants in Bradford had the same measures that we had in place yesterday.

‘We saw long queues outside restaurants across Bradford during that scheme. None of them went to the extent of having barriers or handing out masks, but we went to the next level and we prepared professionally.

‘We invested a lot of money in keeping people safe.’

The special offer was a throwback to when the restaurant wad opened in 1972 by Coronation Street stars Bernard Youens and Jean Alexander, who played Stan and Hilda Ogden.

The spokesman added: ‘We decided to give something back to the people of Bradford and charge them our original 1972 price for fish and chips. 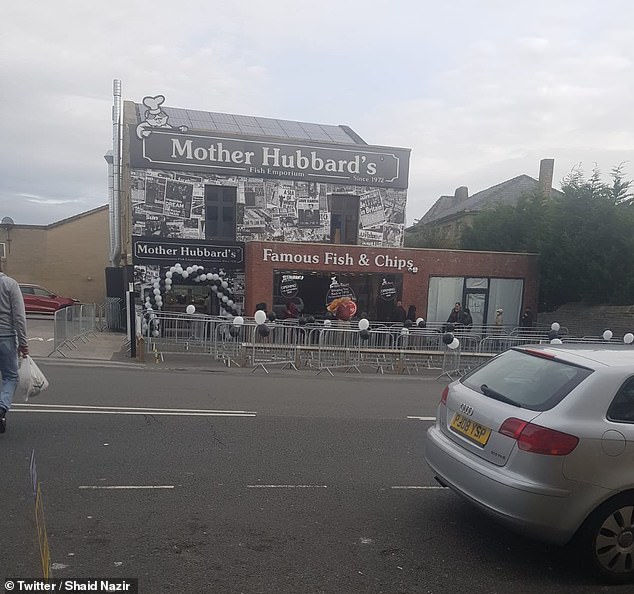 The fish and chip shop claimed that while the scenes did look ‘chaotic’, the restaurant ‘tried its best’ to manage things ‘professionally’

‘We made this decision in the name of community spirit – everyone has had a tough time due to Covid-19, so we wanted to give something back.

‘It was all about bringing back the nostalgia of 1972 and supporting the local community.’

The scene comes amid fears of a second national lockdown as the Government imposes its new Rule of Six panic restrictions across England today.

The rules, which will mean groups of more than half a dozen cannot meet socially, follow a ‘surge’ in Covid-19 cases last week, with figures showing 368,504 people testing positive with the virus on Sunday.

Announcing the new restrictions, Mr Johnson said: ‘We need to act now to stop the virus spreading. So we are simplifying and strengthening the rules on social contact – making them easier to understand and for the police to enforce.

‘It is absolutely critical that people now abide by these rules and remember the basics – washing your hands, covering your face, keeping space from others, and getting a test if you have symptoms.’