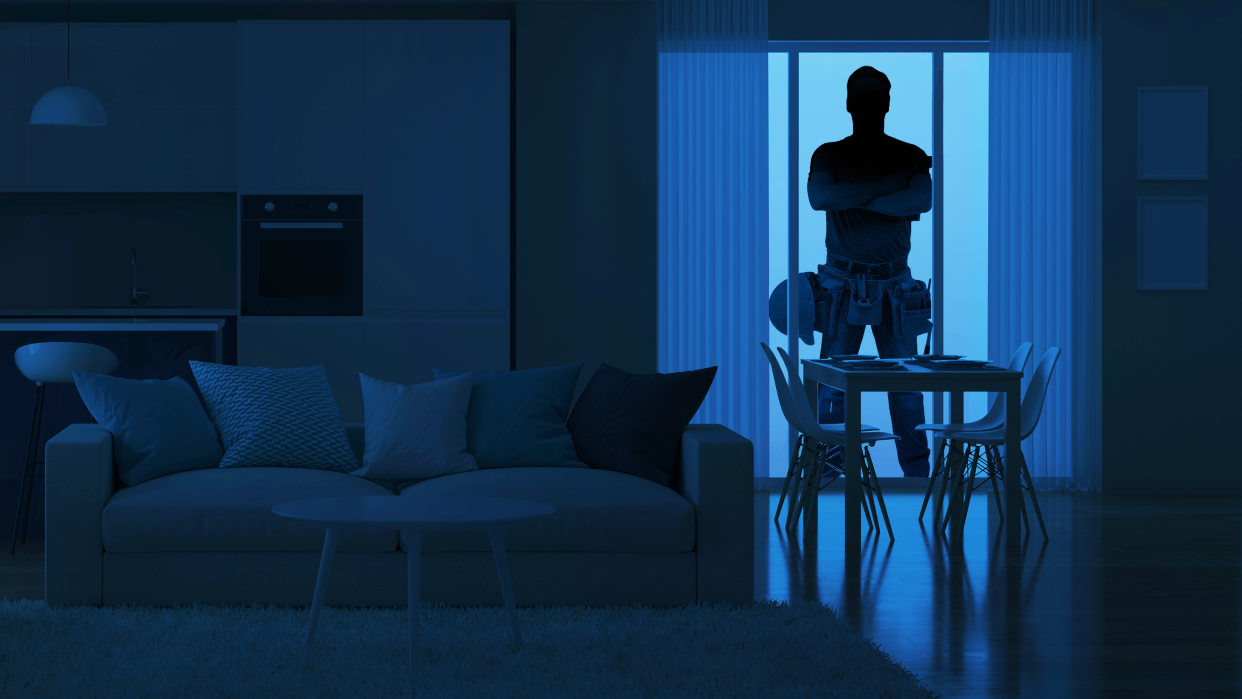 Say you’ve got a home service issue scheduled for the day – internet repair, an appliance delivery, or your maintenance person is coming to fix something in your apartment – and you’re home alone. Do you feel comfortable letting in someone you don’t know?

You’ve done it many times before. But then the service person asks whether you have a boyfriend.

When USA TODAY asked people to tell us about their experiences during home service calls, responses came in from across the country describing encounters that left them feeling uncomfortable – angry behavior, inappropriate sexual comments, or leering, or texting afterward that stretched late into the night.

Though some incidents didn’t amount to assault, they were alarming enough to make people feel vulnerable in their own homes. The most common word used to describe the encounters: “creepy.”

Some people reported the incident to the company, the police or both – but many had to navigate the company’s maze of contacts or received little to no follow-up from anyone. Some chose not to report at all, fearing retaliation from the service person, and quietly hoped it would go away.

For 66-year-old Susan Hawkins of Fort Worth, Texas, a 2016 encounter with a cable man left her scared, shocked and embarrassed.

On the day of the installation, she was excited. She usually had her grandchild with her, but that day she was alone. When she was talking to the cable man about the bill, she said he told her he had a deal for her: He would waive the installation fee if she had sex with him.

She froze, said no and went to her room. When she returned, the man exposed himself to her.

“I was so embarrassed,” Hawkins said.

He kept urging her to touch him and have sex with him. She told him to leave. When he realized she was serious, he told her he would finish installing the cable, then leave. He stayed for an hour, she said.

Hawkins kept her front door open, thinking what she’d have to do to defend herself if he attacked her. She could have hurt him, she said, but didn’t want to.

“I felt so vulnerable with him,” she said.

Hawkins never told anyone what happened. She is a Black woman, and he was a white man. Filing a complaint against him would have meant going up against the world, she said. She just wanted it all to go away.

Since that incident, she says she has “stranger danger,” rarely leaves the house and finds it hard to trust people.

Looking back, she now suspects the cable man had gotten away with that behavior before. She feels angry knowing other women likely faced similar situations.

At the time, she said, “I thought I was just the only one.”

Why reporting is hard — and why it matters

Jim Willshier, chief public affairs officer at The National Sexual Violence Resource Center, said women especially don’t report because they feel nobody will believe them, including close friends and family.

Men and women alike may be afraid to come forward because they don’t want to be ridiculed or perceived as weak.

Some may feel that reporting the incident will trap them in a “long bureaucratic process.”

Help us investigate: Fill out this form to share your stories with our consumer watchdog

Willshier notes that the reporting process doesn’t have to start with contacting police or the company; it can mean telling someone the person trusts, like a family member or close friend.

Telling your inner circle can help you process the incident, so you don’t second-guess yourself, he said. It also can help you take the next step, to report to the company or police.

“Sometimes, why someone might come out months or years later, and just now reach a point where they’re able to come forward, is because they just need to get it out,” he said.

He advises the person listening to help the victim be believed if they go forward – but says sometimes just listening is enough.

“Just be the sounding board,” Willshier advises. “We all have different experiences and we all experience things differently. So, our path to healing and what we want is different from person to person.”

Trish Hoffman, a retired lieutenant with the Albuquerque Police Department and founder of Women Against Crime, a self-defense training company, said that if a scary situation doesn’t get reported to police or the company, the same thing could happen to somebody else.

Even if you feel you are not being heard, reporting leaves a paper trail that later can identify a pattern of unusual behavior.

“Is it the right thing to do? Absolutely. But it takes some guts,” Hoffman said. “So many times, we don’t listen to our gut instinct about someone being creepy, and… blow it off.”

When 50-year-old Angela Fabian, of Denton, Texas, tried to report her incident to the company, she was sent in circles.

It happened during the onset of the pandemic in 2020, when Fabian, a single parent, was home-schooling her 10-year-old son. They were so isolated that she figured getting cable television would help pass the time.

She was alarmed to see two men at her door. They were not wearing the company uniform, but claimed to be with the cable provider. Then, they stared at Fabian’s chest.

“The whole situation made me very uncomfortable,” she said.

She didn’t want to let them in, but thought that because they would be working outside, it would be OK.

They drilled holes into the side of the house and damaged her roof. She couldn’t clearly communicate with them, she said, because they relied on their phones to translate most of the conversation into and out of Spanish.

They were at her home for at least three hours, and she found herself wondering whether they were scoping out her house to return later.

After they left, Fabian called the company about the damage, but was instead directed to international call centers. She asked for different departments, but nobody knew what she was talking about. She said some of the representatives laughed at her and hung up.

She eventually got through to someone in technical support who was able to contact the cable men about the damage they had done.

That night, one of the men called and texted her at 10 p.m. wanting to come over “to fix the problem” they had caused.

“That is so creepy! How did you get my number?” Fabian remembers thinking. She never responded to the text.

The next day, the company emailed her a performance survey to rate the service, and she reported everything that had happened: the damage to her house, the leering, and the late texts.

The cable man texted her again saying he wanted her to change her answers because he got in trouble.

It concerned her that her survey response wasn’t anonymous, and her information somehow made it back to the cable man. She got really scared, thinking he would retaliate.

“I felt threatened,” she said.

She called the company again, and they told her to call the police. But when she did, she felt the police didn’t take her concerns seriously. Neither the company nor police followed up with her. So, she decided to reactivate the security system that had come with the home, even though she couldn’t afford it. She even bought a gun.

It turned out that the cable men were third-party contractors. When she took her complaint to them, that contracting company started sending people out to look at the damage, and she was hopeful that her house would be repaired.

The contractor presented her with a document that released the company from liability in exchange for the repair, a document she refused to sign. So, her house remains damaged.

And Fabian is still damaged, too. Ever since the incident, she’s been wary of letting anybody into her house, unless her boyfriend is around.

Willshier urges people to trust their “gut feeling” or “sixth sense” that something is wrong. It is OK to remove yourself from the situation, he said, if you are uncomfortable when someone acts unprofessionally.

When Alexa Carrillo, now 28, looks back at her experience, she sees what happened to her very differently. Carrillo, of Tucson, Arizona, said that when she was 19, she lived with her boyfriend in a small apartment. A man knocked on their door with a work order to replace the toilet.

Carrillo was getting ready for work, using her makeup vanity in the living room, when she noticed the man looking at her.

“Your husband is a very lucky man,” she recalls him saying.

“I didn’t respond to him, but I felt very uncomfortable after that; I could feel him continuing to watch me,” she said.

Today, she wishes she had reported him, but “at the time I didn’t feel like I was in much danger; I just felt creeped out.”

What does it mean when someone is described as “creepy?” Hoffman says the term itself is too vague and broad.

“That isn’t a description of what someone is doing,” she said. “That’s just something that we feel, but it’s not an actual act.”

That’s why she advises people to be as detailed as possible when making a report to the company or police. Explain the behavior by detailing the remark or the gesture that bothered you.

“We have to have enough confidence in our skills, in our mindset, and our ability, that when we know something isn’t right, … we do something about it versus just blowing it off, because it could change the outcome of what happens to us,” she said. “In your mind, if you’re threatened, you have to commit to protect yourself.”

How to report an incident

But, if you can’t reach the company’s complaint department, here are some other avenues:

Amritpal Kaur Sandhu-Longoria is the consumer watchdog on USA TODAY’s investigations team. Send her your tips at [email protected], @AmritpalKSL, or on Signal at (434) 473-4073.

This article originally appeared on USA TODAY: ‘Creepy’ experiences with repair people in the home: What you can do