Afghan asylum seeker Masi Mobin vividly remembers spending 16 hours clinging to a piece of timber in the Timor Sea, north of Australia, before he was rescued.

The flimsy boat, which the 15-year-old had paid a people smuggler to board, had overturned in choppy seas and all but four of the 28 souls on board drowned, including Mobin’s uncle. 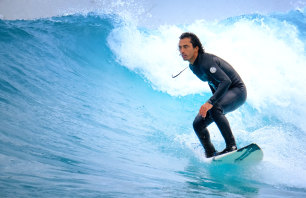 Afghan refugee Masi Mobin, who works on weekends as a guide at URBNSURF surf park in Tullamarine.Credit:Luis Enrique Ascui

That was 12 years ago. Today, Mobin is settled in Melbourne, runs a house-painting company, and is studying to become a builder.

Like many migrants with a strong work ethic, he also works on Sundays, as a surfing teacher and lifeguard at URBNSURF, a surfing park in the north-western Melbourne suburb of Tullamarine.

He jokes that he is “the first Afghani surfer”. 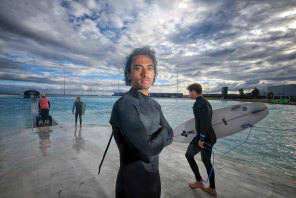 Inspiring others: Masi Mobin at URBNSURF surf park in Tullamarine where he works.Credit:Luis Enrique Ascui

Mobin says he used to not find it easy to tell his story, but he now wants to inspire others not to give up, and to “make something out of life”.

As ethnic Hazaras from the northern Afghanistan town of Hairatan, his parents and six siblings fled to Peshawar, Pakistan in 2008. Taliban soldiers had come for his father, Najib, a chemical engineer who had worked for an American company.

Najib fled but the Taliban broke his wife Hamida’s wrist and wounded two of Masi’s brothers.

Mobin, then 14, and his uncle Husham were sent to settle “in a first world country”.

That is because, earlier in Mobin’s life, the family had lived, for five years, a destitute life in a Pakistan refugee camp, where even the children had to make carpets from 4am to 9pm. There was no future.

Thanks to false passports, Mobin and his uncle flew to Indonesia where it took Mobin three attempts over two years to get to Australia by boat.

On the first voyage the boat was intercepted by Indonesian officials but Mobin and his uncle bribed detention camp guards to release them.

The second boat trip ended with the capsizing – Mobin remembers being tangled in a tarpaulin and rope under the upturned hull and almost giving up.

“But I remembered my mum and it gave me a shock and I said ‘I want to see her again’. That was the trigger that gave me the energy that said to try and get out.”

But despite clinging to a plank for 16 hours in the water, the thing that today gives him more nightmares is, after he was rescued, being beaten by guards in a prison-like detention centre in Indonesia.

He lived in a tiny cell with 11 other asylum seekers for almost two years, locked up for 24 hours a day and surviving on a flimsy bun for breakfast and rice with oil or ketchup at 4pm.

A large Afghani family he befriended, who didn’t have enough money required to bribe their way out of the detention centre, loaned Mobin the $3000 they had so he could get out.

He had no choice but to find the same people smugglers he had used in the past, and this time the boat — although it was lost at sea for a month — entered Australian waters and was picked up by our navy.

After 18 months in detention on Christmas Island and in Darwin, Mobin stayed briefly in Melbourne before heading to Sydney, where he lived for 10 years.

He was “extremely underpaid” cleaning cars and bathrooms and labouring and played soccer semi-professionally when disaster struck — he broke his leg.

He was homeless when Sydney councillor and radio producer Cathy Peters answered a social media call-out by the Asylum Seeker Resource Centre. Ms Peters gave him accommodation for two years, in the suburb of Enmore.

“I’ve got lots of love and respect for her. I always call her as my lifesaver, as a hero of mine,” Mobin says.

Mobin took up swimming, and it led to work as a lifeguard and managing three swimming centres.

Sydney was becoming too expensive, so three years ago, he came to Melbourne and did a painting apprenticeship then opened his own business, Expert Painting and Renovation.

He is also studying at RMIT for a building and construction diploma. He started as a lifeguard at URBNSURF when it opened in January 2020 and now works there on Sundays.

Damon Tudor, CEO of URBNSURF, which was closed for half of the past two years due to COVID-19 restrictions, said Mobin’s story inspired him.

“You think, ‘wow, I might be having a tough day’, but I look at what Masi has been through and the sort of person he’s become, and I think, ‘Yeah OK, I’ll get over it pretty quickly. Look at what he’s overcome’.

“I’ve got a real respect for what he’s been through, where he is and his outlook on life.”

Mobin, now 27, reunited for two weeks, four years ago, with his family, in Kazakhstan, where they now live.

His mother was so emotional she couldn’t talk.“She was crying for two hours.”

He aims to become “the best builder in the country” but also to look in the mirror when he gets old and say, “I had nothing and I worked hard”.

“I want to inspire the next generation after me, to don’t give up and make something out of life. If I can do it, everyone else can do it too.”