Cricket hero Sir Ian Botham will be the new face of British produce in Australia at the request of his Prime Minister Boris Johnson.

Botham, who haunted the Australians with bat and ball during a record-breaking career, is one of 10 trade envoys appointed by to boost British business in dynamic markets such as Australia, Brazil and Canada.

The 65-year-old, universally known as “Beefy”, was among the first celebrity cricketers of the modern era, with his face and name attracting front-page tabloid attention through a series of controversies including his extramarital affair with an Australian waitress and drug use. 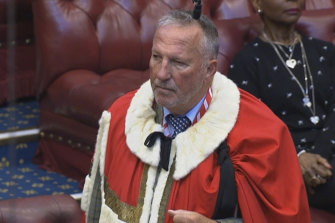 Former England cricketer Ian Botham takes up his seat in the House of Lords as Baron Botham of Ravensworth, in London, Monday October 5, 2020.Credit:House of Lords

One of England’s greatest all-rounder with 5,200 test runs and 383 wickets, he publicly supported the Brexit campaign, appearing alongside Johnson at public events. He was later given a peerage and was appointed to the House of Lords in October last year as Baron Botham of Ravensworth in the County of North Yorkshire.

“It’s a great honour to carry out this role in a country that I love and have come to know so well,” he said.

“I have spent a significant amount of my career in Australia, and I am excited to have the opportunity to build on the UK’s longstanding relationship and promote UK trade.“

His appointment follows a historic trade pact between Britain and Australia which was finalised in June last month in a meeting of Prime Minister Scott Morrison and Johnson in London. 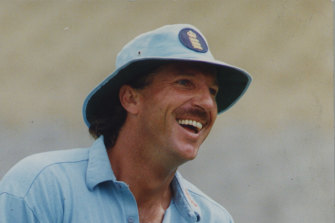 Ian Botham at training in Australia in 1992, when he stormed out of a royal dinner after taking offence at an impersonation of the Queen. Credit:Fairfax.

The country’s first post-Brexit trade deal with Australia was spruiked as bringing cheaper barbecue food and wine to supermarkets, but also an opportunity for better access for British companies to invest and sent their products to Australia.

“Lord Botham’s skills and experience, together with his market knowledge developed during his time spent in Australia throughout his career, will help us promote the exciting new opportunities for two-way trade and investment.

“In the UK Lord Botham will help us encourage British business across every part of the UK, and SMEs in particular, to look to export to Australia and so increase our market share and economic prosperity. For Australians this means greater choice with both existing brands and exciting new options too.”

Botham’s relationship with Australia has not always been cordial, creating controversy on the eve of 1992 cricket World Cup final in Melbourne, when he stormed out of an official dinner after taking offence to Australian comedian Gerry Connolly’s impersonation of the Queen.

“I’m there and I’ve got some poofter gay guy comes on stage in drag with a stuffed corgi under his arm and takes the piss out of the Queen. Why should I put up with that?” he later said.