Wellington: Three of New Zealand’s nine naval ships are sitting idle in port as higher civilian salaries lure personnel out of the military, the country’s Defence Force said, even as tensions in the Pacific rise between China and the US and its allies.

The HMNZS Wellington, an offshore patrol vessel, headed back to home early from what was meant to be a three-month deployment in the Pacific and was taken out of operation in November because of shortages, the force said. 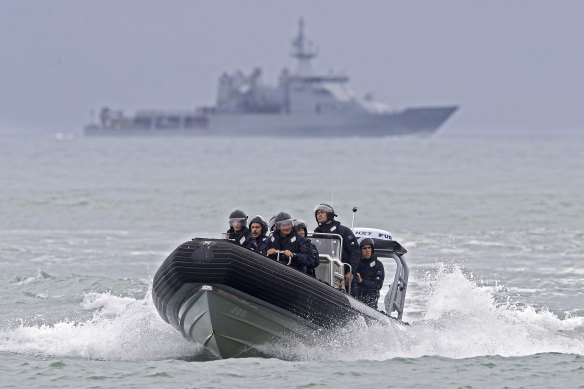 Crew from the HMNZS Wellington return to shore during a search for survivors of the Whakatane volcano eruption in 2019. The ship is currently idle due to lack of personnel.Credit:Getty Images

The Wellington is the third ship to be put into “care and custody”, with two other vessels – another offshore patrol vessel and a smaller patrol vessel for operating close to shore – pulled off the line and their crews reassigned last year. The vessels have crews of 24 to 42.

The number of people leaving the Defence Force is at its highest level in decades, as staff have quit for jobs in the private sector, where salaries have risen due to a tight labour market. The Navy attrition rate was about 16.5 per cent in the year to November.

NZDF is also dealing with ageing equipment and a large number of personnel being assigned to border quarantine facilities.

The bottom line is “workforce issues are impacting ship availability to deliver naval outputs,” an August note from the Chief of the Defence Force Air Marshal Kevin Short to the Minister of Defence said. “Risks remain to Naval output delivery if attrition and hollowness cannot be addressed in a timely manner.”

NZDF has just over 15,000 personnel, including civilian staff, and about 2800 are in the Navy. The Defence Force said in May that it would spend NZ$90 million ($85 million) over four years to raise the salaries of the lowest-paid workers. Officials hope personnel figures will significantly improve by 2026-2027.

Having so few ships available makes it harder for the navy to handle multiple challenges at once, a spokesperson said.

The problem is especially acute as the US, Japan, Australia and other countries in the region square off against China and strive for influence. New defence spending plans, driven by lessons learnt from Russia’s invasion of Ukraine, are also taking shape.

New Zealand, which spends roughly 1.5 per cent of its of GDP on defence, this year announced it would review its policies in light of regional geopolitics and climate change. The review is not expected to be completed until 2024.

In July, after China signed a security pact with the Solomon Islands, New Zealand Prime Minister Jacinda Ardern said the Pacific region could manage security issues on its own.

Minister of Defence Peeni Henare acknowledged in an email that staff losses were hurting the force, but said the government was committed to rebuilding it.

“There is more still to do,” he said.

The country is replacing its fleet of C-130 cargo planes and P-3 maritime patrol aircraft (MPA), and the first of four Boeing P-8A Poseidon MPA is due to arrive this month. Plans for a new military vessel built for Southern Ocean and Antarctic conditions were shelved this year.