London: The perils of 'reply all' have laid bare the plotting to topple Theresa May.

As the British Prime Minister prepares to face her backbench amid expectations she could announce her departure in order to save her Brexit deal, an email leaked to The Sydney Morning Herald and The Age reveals the moves to replace her with a Brexiteer. 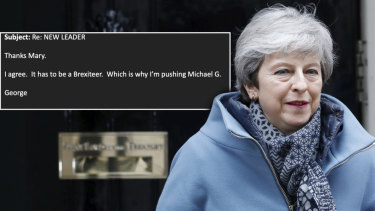 Tory MP George Freeman was one of the first conservative backbenchers to call for May to resign.Credit:Bloomberg

A voter named May emailed more than a dozen Tory MPs including the former defence secretary Michael Fallon, Brexiteer MPs Michael Fabricant, the gaffe-prone minister Chris Grayling and many more on Sunday morning.

Her email was sent on the same morning the British press was awash with reports a cabinet coup may be underway to install a caretaker prime minister – possibly the de facto deputy David Lidington or the Environment Secretary and prominent Brexiteer Michael Gove.

Tory MP George Freeman, who was one of the first conservative backbenchers to call for May to resign as the reports broke, replied to May, but cced in the rest of his colleagues.

When contacted for comment, Freeman said that he feared May's time was coming to an end and that if an interim PM is needed Gove is the obvious cabinet minister to step in and replace her. 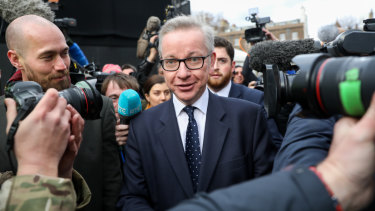 "As I always feared would be the case, delivering Brexit has used up all the Prime Minister’s political capital," he said.

"If she can secure an orderly withdrawal and end the ongoing civil war about the EU referendum result, I think we will leave with the gratitude of a grateful nation.

"Her successor needs to be someone who can unite the nation by combining a commitment to Brexit with a bold programme of domestic reforms.

Gove's standing within the Conservative Party diminished substantially immediately after the Brexit referendum when he stabbed Boris Johnson in the back to run for leader himself. His move only scuttled both their leadership bids at the time.

Now, Johnson, who quit as foreign secretary over May's planned Brexit deal, appears to be edging towards supporting it, fearing that the move by Remain MPs to seize control of the parliamentary agenda could see the entire Brexit project scuppered.

But Brexiteers who have so far held out from supporting May's deal are demanding her scalp as their price.

May is due to face the 1922 committee of backbench MPs on Wednesday afternoon local time. There are growing expectations she will agree to stand down in exchange for rebel MPs backing her deal.

The prominent Brexiteer Jacob Rees-Mogg has already signalled he will back her deal but it remains unclear if she will scrape enough votes to have it approved. MPs are preparing to vote on a series of non-binding motions to see if they can form a consensus around a softer Brexit.