The most remarkable aspect of last week’s announcement that four Andrews government senior ministers would retire together was that it leaked to mainstream media before the formal reveal.

Dan Andrews prides himself on being independent of traditional media and rarely uses radio or television interviews. Occasionally there will be an “exclusive” drop to a newspaper, but is far from common. Different agencies – particularly Victoria Police – play a different media game. 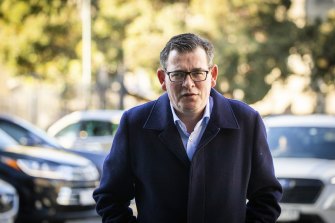 Premier Daniel Andrews has more social media followers than the leader of any other state.Credit:Paul Jeffers

Andrews’ wariness of local media is a legacy of his long-running feud with The Herald Sun, formed from their serial campaigning against him, election after election, matched with his annoyance with some individual local journalists. Whether a truce is arranged between now and the election will be a fascinating sideshow to the main game. Don’t hold your breath, but anything is possible.

Compared to previous premiers, Andrews does fewer one-on-one interviews, which are the purest form of accountability. A solid solo interview on radio or TV is an arm wrestle between the two protagonists.

It may not follow any predictable agenda, which terrifies press secretaries. It can provide distractions – a classic example being Tony Abbott winking at me across the studio desk when a talkback caller revealed she was forced to supplement her meagre income from the dole by working on a telephone sex-line.

A lengthy studio radio interview also allows follow-up questions from the host and provides an opportunity to get beyond a slogan or a cliché – hence the reluctance of some political figures to engage. 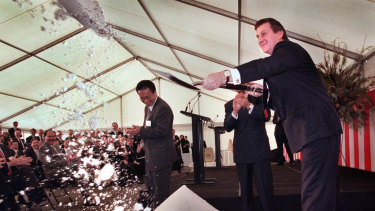 Then premier Jeff Kennett shovels sand at the waiting media as he launches the start of construction on CityLink in 1996.Credit:Simon O Dwyer

For as long as he continues to enjoy a comfortable lead in the opinion polls, Andrews does not see any reason to deviate from a successful small media target strategy. Expect to see a change to the dynamic as the electoral cycle swings towards November’s poll.

Governments always try to manage the way they are portrayed in the media. For nine years, the Abbott/Turnbull/Morrison governments consistently announced their activities through the Murdoch papers, particularly their national broadsheet. The Australian would sometimes resemble a government information sheet, leaving other print and electronic media scrambling to catch up.

Throughout his tenure, Jeff Kennett used the local tabloid as his preferred outlet, maintained a feud against ABC News & Current Affairs on both radio and TV and regularly criticising The Age, all while maintaining a cosy relationship with 3AW. Remember the image of the then premier shovelling sand at the media pack, only half in jest?

Andrews’ refusal to be schooled by the tabloid editors is reminiscent of Malcolm Turnbull’s fabulous retort to the not-missed-at-all Sydney shock-jock Alan Jones, when the then PM retorted, “I will not to take dictation from you” as the puffed-up breakfast radio host tried to tell Turnbull what he had to do. Almost nobody remembers the issue they were squabbling about but the attempt by the prime minister to remind Jones of his rightful place in the universe is unforgettable.

He is the most prolific and consistent user of social media in Australian politics with a sizeable team devoted to creating fresh content throughout the day as well as monitoring public reactions. On Twitter alone he has 10 times more followers than his NSW counterpart – 419,000 to Dominic Perrottet’s 41,000. No other state premier relies on tweets as much – Annastacia Palaszczuk in Queensland is closest with half as many followers as Andrews.

In all of Australian politics, only the new Prime Minister has a bigger Twitter base, but he is not as active as Andrews. Anthony Albanese has just over 500,000 Twitter disciples, Penny Wong 390,000. Peter Dutton attracts a mere 130,000. Tellingly, Matthew Guy, the Victorian Opposition Leader, has just 28,000 followers on Twitter and still relies on “legacy” media to try to get traction.

Twitter is just one tool in the Andrews social media armoury, but the platform is obsessively watched in political circles and can be highly effective. It can be toxic and a risk to people’s mental health, but is a platform where the creator retains total control over content – no pesky ‘gotcha’ questions or tricky traps set by ambitious journalists. Andrews has invested heavily in creating an expert team of social media specialists to milk every opportunity.

The Premier cannot be accused of being shy of an old-fashioned “all in” press conference as we saw with the “Daily Dan” marathons with the press pack throughout Victoria’s extended lockdowns. But being seen to be in charge during a prolonged emergency is entirely different to massaging the message during an election campaign, where control of every component is vital.

When Andrews returned from his extended rehabilitation after a serious back injury, he addressed Victorians directly, his team filming him talking to their camera, sitting on a couch at home with his wife, Catherine. They knew that all media would re-report his spiel. By speaking directly to the voters through social media, he avoided being edited and was not critiqued for playing favourites with any individual media outlet.

The AFL has long adopted a similar strategy. The league and the clubs are thought to now employ more football journalists than independent media combined. They generate their own stories, their own interviews, their own stunts. They protect their brand by limiting the opportunities for external scrutiny.

Politics and professional sport have much in common.