Srinagar: India is reporting soldiers that its soldiers thwarted “provocative” military movements carried out by Chinese troops near a disputed border in Ladakh region .

A statement by India’s defence ministry on Monday said China’s People’s Liberation Army carried out actions "to change the status quo” and “violated the previous consensus arrived at during military and diplomatic engagements” in the cold-desert region.

The army is not disclosing what it means by "provocative military movements or whether the PLA has breached the disputed territory at a fresh point. 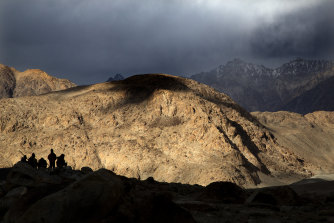 The treacherous terrain of the Ladakh region.Credit:AP

It said Indian troops preempted the Chinese military activity on the southern bank of Pangong Lake. The glacial lake is divided by the de facto frontier between the rivals and is one of the three sites where the India-China faceoff began in early May.

The statement said the two countries local military commanders met along the disputed frontier on Monday to “resolve the issues". It said India was committed to dialogue “but is also equally determined to protect its territorial integrity".

Several rounds of military and diplomatic talks to end the current crisis in Ladakh have been unsuccessful.

The disputed and undemarcated 3500-kilometre (2175-mile) border between India and China stretches from Ladakh in the north to the Indian state of Sikkim.

The two Asia giants fought a border war in 1962 that also spilled into Ladakh. The two countries have been trying to settle their border dispute since the early 1990s, without success.